The legal profession and industry in India is a mysterious market that even its regulator doesn’t seem to have good grip on. 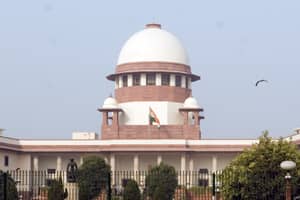 At least in terms of numbers—this puts India on a par with the US, which still seems to remain the world’s largest legal market with 1,201,968 practising lawyers in 2010, according to the American Bar Association.

But that is more or less where the comparisons end.

The US is usually claimed to be “over-lawyered"—i.e., there is the perception that there are more lawyers than there is work available. The average citizen perceives this in aggressive TV adverts touting for legal services, so-called “ambulance chasing" (lawyers running after accident victims as potential clients) and a litigious culture where lawyers win you crores of rupees in compensation, such as in the often quoted case of a consumer spilling McDonald ’s coffee on herself, and winning compensation from the fast food chain because the cup’s content was too hot and the exterior didn’t have a prominent enough warning of that fact. 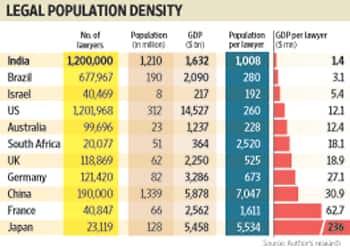 India’s legal population density is fairly average. One in every 260 US citizens is a lawyer and in the UK there is one lawyer to every 500 Brits (see table). Only 1 in around 1,000 Indians are lawyers but in other countries there are even fewer lawyers per capita: one lawyer per 7,000 in China, 5,500 in Japan, 2,500 in South Africa and 1,600 in France. On the other hand, when comparing the number of lawyers to gross domestic product (GDP), India is a global record-holder at the bottom of the table of countries where data is readily available. Each Indian lawyer, on average, has to carve out a livelihood and earn client fees out of only $1.4 million of GDP. Other countries’ lawyers have a far, far bigger pie at their disposal. Brazil (with as many lawyers per capita as the US) comes closest at $3.1 million of GDP per lawyer followed by Israel, which is said to have the highest lawyer density in the world. In almost all other major countries, GDP to lawyer ratios are in the double digits, while in Japan each lawyer has a massive $236 million of GDP to play with.

This helps explain why in many legal markets lawyers are seen as part of the wealthy elite (most are too well-paid in the public consciousness—pick up the average John Grisham novel for supporting evidence). The majority of lawyers in India are lawyers in name alone. Poorly educated, if at all, with a law degree of questionable legitimacy from one of 900-odd law colleges, they effectively operate as fixers, making their living as affidavit wallahs hawking for work outside small claims courts or as notaries.

They could charge 50 to several hundred rupees for the privilege. Nevertheless, they are tightly integrated in the running of any court. These are the lawyers that the average citizen interacts with.

Chennai-based advocate Elizabeth Seshadri once described some members of this group as “pseudo lawyers", who have presided over a fall in the standards to make up for their lack of actual legal skills. They are the ones who regularly appear in headlines of lawyers going on strike or even rioting.

At the other end are the senior advocates who charge lakhs of rupees per appearance—“in high-end litigation we have 15 guys that you deal with, maybe 20", says Luthra—and the number of Indian corporate lawyers able to provide high-end advice to large companies lies between 3,000 and perhaps 9,000 at most, estimates Luthra. Better data than such guesstimates does not exist.

Even if you take a charitable figure of around 10,000 lawyers doing high-end corporate and litigation work and compare this with India’s GDP, you end up with $163 million of GDP per high-end lawyer. Owners and senior partners of major law firms are therefore anything but poor (and even junior members of those firms are not doing too badly—see story above).

It is clear that India effectively consists of at least two different legal professions. One of these has huge room for growth and needs to grow so that Indian companies and foreign investors get high quality legal advice. At the other extreme too many lawyers have paralysed the court system where crores of cases are pending. Indian legal regulators and politicians will fail in their task unless they explicitly recognize this dichotomy and work towards reforming it.

Kian Ganz is a lawyer-turned-journalist based in Mumbai, from where he publisheslegallyindia.com.