Home / Opinion / Online-views /  Is there room in the budget for a big rural stimulus?
Back
Share Via

Is there room in the budget for a big rural stimulus?

New Delhi: The government has given enough signals that the distress-ridden rural sector would receive special focus in the forthcoming Budget. On Monday, a Mint report quoted senior officials in the agriculture ministry saying that there could be a significant increase in budgetary allocations for crop insurance and irrigation. But in the backdrop of the 14th finance commission recommendations and the government’s own spending this year, three questions can help understand whether the Budget has enough wherewithal to provide a big rural stimulus.

1. How much has the government spent so far?

Finance minister Arun Jaitley recently said government spending on the Mahatma Gandhi National Rural Employment Guarantee Scheme (MGNREGS) would cross his budgeted estimates for the current fiscal year. He went on to say that in doing this, his government was making a departure from the earlier practice of governments which did not honour the plan expenditure commitments made in budgets as actual spending would be less than budgeted estimates figures. An examination of latest rural sector spending figures of the central government (till December 2015) shows that while spending till December as a percentage share of budgeted estimates is the highest since 2011-12, the actual amount spent is lower than last year. Rural sector spending here has been taken to include plan expenditure of ministry of agriculture, panchayati raj and rural development. 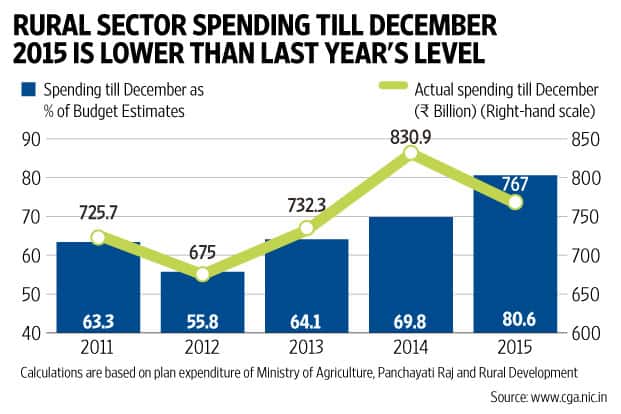 A similar picture holds for government spending on major rural sector welfare programmes. In its analysis of the 2015-16 Union budget, the Centre for Budgetary Governance and Accountability (CBGA) gave a break-up of allocation for four major rural welfare schemes during the 12th five year plan. According to the CBGA, these four schemes constitute bulk of the central government’s rural sector welfare expenditure. Among these, MGNREGS accounts for around 43% of the total spending. While MGNREGS spending seems to be on track with 12th Plan targets, the government would have to make extra effort to meet proposed spending for all four welfare schemes in this year’s budget, since allocations till 2015-16 budget have contributed to only 73% of the proposed spending. 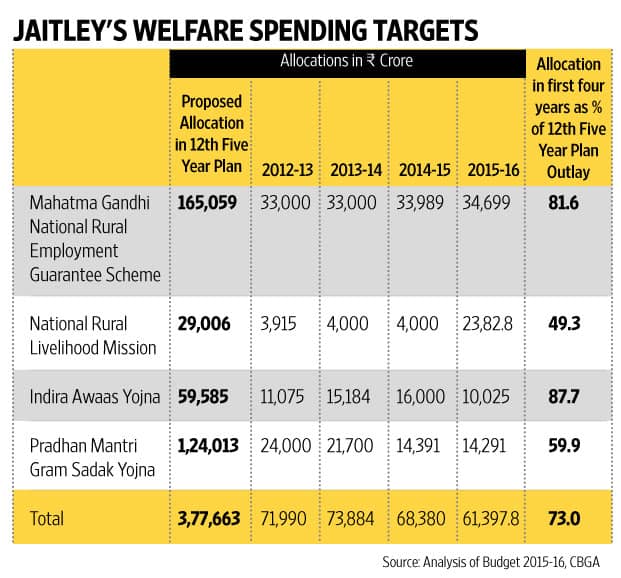 Any shortfall in the spending should be cause for more concern, as the Planning Commission approved spending anyway was much lower than what the ministry of rural development wants, says the CBGA analysis.

2. What is the share of rural/farm sector expenditure in overall spending?

One flaw with looking at allocations to individual programmes/schemes is that an increase in spending in one programme could come at the cost of another. It is safer, therefore, to look at the overall share of rural/farm sector in a budget to understand whether or not a stimulus has been provided. One way of looking at it can be to see the share of rural/farm sector plan expenditure in the government’s total plan expenditure since non-plan spending includes items like salaries. Trends in plan expenditure for the three ministries referred above show there was a marginal decline in this figure between 2014-15 and 2015-16. One reason for this could be a decline in the overall size of plan expenditure due to the recommendations of the 14th finance commission.

Until now, budgetary policy commentators in India had their job cut out. The erstwhile Planning Commission would prepare a plan with allocations earmarked over a five-year period. Union budgets were supposed to fulfil these allocations. That situation has changed after the 14th finance commission increased the share of states in central taxes by 10 percentage points. To make up for its loss of resources, the Centre cut down on its financial support to many important Centrally Sponsored Schemes (CSS). Many of these CSSs had a rural/farm sector focus.

In an article published last year, Abhijit Sen, who as a part-time member gave a dissent note to the finance commission recommendations, raised this point. Sen argued that cutting or stopping central funding for programmes such as the Backward Region Grants Fund and Normal Central Assistance might result in some states reporting a net loss of resources under the new devolution structure. He also added that states might not be inclined to use their new untied transfers to sustain such schemes, which would lead to a reduction in the quantum of available resources to the Centre.

To be sure, central funding has been left unchanged for important schemes such as the MGNREGS. However, according to a 2015 Economic and Political Weekly paper by Pinaki Chakraborty at the National Institute of Public Finance and Policy, central government’s net support to CSS has reduced by around ₹ 67,000 crore in the 2015-16 budget, in comparison to 2014-15 revised estimate figures. To sum up, two points can be made. One, whether or not the government has actually given a big stimulus to the farm sector in the previous years is a question which should be answered by looking at the larger spending picture rather than changes in budgetary allocations for individual schemes. Two, the government might argue that it does not have much elbow room to increase spending in the wake of increased tax devolutions to the states.

In that case, whether or not this budget will lead to an increase in farm sector spending can only be answered when a detailed analysis of state budgets is available. One thing might clinch the debate though: Jaitley announcing some new rural schemes with sizeable funding to be wholly financed by the Centre.