"storyDirectUrl"
OPEN APP
Home >Opinion >Do Muslims in India suffer a bias when it comes to imprisonment, conviction?

Do Muslims in India suffer a bias when it comes to imprisonment, conviction?

Last month, nine men, all Muslims, were acquitted by a Mumbai court in the Malegaon blasts case of 2006. It took five years for the acquittal to come after the National Investigative Agency said in 2011 that it had no proof against the accused.

That begs the original question: do Muslims in India suffer a bias when it comes to imprisonment and conviction?

What do the numbers say?

Replying to a question in the Rajya Sabha last month, the government said that the share of Muslims in total convicted and undertrial prisoners at the end of 2014 was 16.38% and 21.05% respectively. Both of these are higher than the share of Muslims in India’s total population (14.23% as per the 2011 census). Convicts are those who have been pronounced guilty while undertrials are those in judicial custody, facing trial.

That does not necessarily mean that Muslims might be a persecuted community in India. The number of prisoners from all three significant religious minority groups (Muslims, Christians and Sikhs) is disproportionate to their population. To be sure, a socio-religious community’s relative share in prisoner population might be a factor of multiple outcomes including its socio-economic development. The relative backwardness of Muslims on socio-economic indicators might be a cause for their higher share in prisoner population (African-Americans in the US have a similar story). What are the crimes of Muslim prisoners exactly?

NCRB doesn’t have this kind of data. However, a 2011 study by the Tata Institute of Social Sciences (TISS) which looked at the socio-economic profile and rehabilitation needs of Muslim prisoners in Maharashtra found that 42.5% of the Muslim prisoners had been booked for sections involving crime against body, while another 29.4% faced charges involving crime against property.

The report also noted that most respondents (Muslim prisoners) stated conflict with the police system as the reason for their being in prison, which led to false implications in cases or mere suspicion leading to arrests. To be sure, this argument is a popular one with most wrongdoers.

The other point of note is that Muslims from states such as Uttar Pradesh and Bihar reported greater bias against them, suggesting migrants are more vulnerable to a corrupt police system. Once again this might be true for all communities.

The report also found that among the 234 Muslim undertrial prisoners in its sample, only 19 had been released on bail. Charges had been framed, the trail started, or the case reached the stage of judgement for 74 others.

To be sure, these statistics do not show that the criminal justice system is necessarily biased against Muslims as many such problems related to clogged courts and slow wheels of justice are faced by all people. The TISS report itself noted this fact.

However, there is another statistic which might suggest that Muslims suffer most in India’s notoriously slow criminal justice system. That is the ratio of non-convicted to convicted prisoners.

As has been discussed above, a socio-religious community’s share in total prisoner population might be an outcome of various indicators, but it is reasonable to expect that the ratio of non-convicted to convicted prisoners be similar for all communities.

If that is not the case, then there is a chance that a particular community is susceptible to being imprisoned without actual conviction. According to 2014 NCRB data, Muslims have the highest non-convict to convict prisoner ratio in the country and in most states.

The ratio has been calculated by dividing the sum of undertrial, detenues and others category prisoners by number of convicts. Muslims also have an abnormally high share (47.8%) in the “others" category prisoners, a group which an NCRB official described as constituting the likes of political prisoners. As chart 2 shows, for every convicted Muslim, there are nearly 3 others in jail who are waiting for the justice system to move. 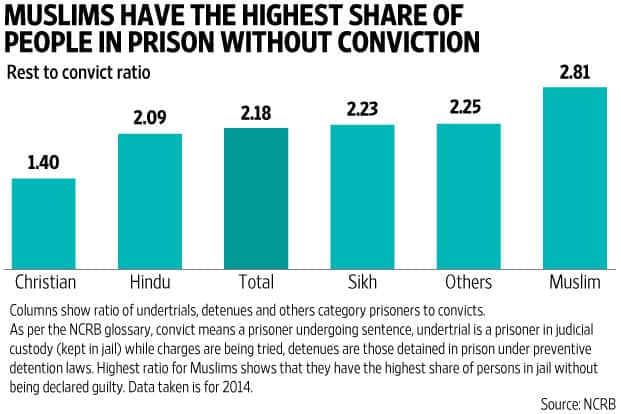 To be sure, the high ratio of non-convicted to convicted prisoners among Muslims could be owing to the higher number of terror cases against people from this community, says Vijay Raghavan, professor at the Centre for Criminology and Justice at the Tata Institute of Social Sciences.

Not only do trials in such cases take a long time, judges are reluctant to release such accused persons on bail. Rules which allow undertrials to be released when they have completed more than half the maximum sentence possible are not applicable in terror cases.

Other experts see the problem in different hues.

K. Subramaniam, a retired Indian Police Service Officer, says there is an ingrained bias in the police against Muslims, which often leads to their victimization. In a riot in Uttar Pradesh, Muslims were the maximum among those killed as well as arrested, added Subramaniam.

Devika Prasad from the Commonwealth Human Rights Initiative says that because Muslims are among the most socio-economically backward communities, they might be more vulnerable to the perversities present in our criminal justice system. Increasingly, people have to bank on higher courts for relief due to serious lapses, inefficiency and non-realisation of legal safeguards at the lower level, said Prasad. This should not lead us to damning the entire setup, as India has among the best jurisprudence practices in the world, Prasad added.