The wealth of states in India

The obvious way to answer these questions is to compare the addition in wealth over, say, the last 20 years and then decide. The problem is that there are no estimates of the wealth in a state. We do, however, have a proxy—the amount of bank deposits.

We can take bank deposits as an indicator of the wealth of a state. We can then find out the percentage of a state’s bank deposits out of the total bank deposits in the country and then compare this with the situation 20 years ago. In other words, we compute the share a state has in all-India bank deposits with its share 20 years ago. That will give some idea of which states have outperformed in terms of wealth and which haven’t.

The first thing you notice from the chart is that West Bengal’s share of total deposits has gone down considerably. Is this because it lost out since liberalization? No, simply because its share came down even more drastically in the 20 years between 1973 and 1993, as the accompanying chart shows. Clearly, West Bengal’s long record of deindustrialization under the thumb of the Left is to blame. The fact that its share of bank deposits has come down so much reflects the decline in its wealth relative to other states and is a lesson as to how bad state government policies can affect wealth.

Note that Kerala’s share of bank deposits also went down between 1993 and 2013, but the pattern here is different from that of West Bengal. Kerala’s deposit share went up dramatically between 1973 and 1993, very likely the result of overseas remittances. Its declining share after liberalization reflects the state’s inability to cash in on the growth of manufacturing and services.

The other big loser has been Punjab. This is probably because the Green Revolution, which had vastly added to the state’s wealth, started running out of steam. Moreover, it reflects not the fact that Punjab wasn’t doing well, but that many other states had started playing catch-up.

Among the surprise losers are Gujarat and Tamil Nadu. Gujarat’s share of total bank deposits went down from 6% in 1993 to 5.1% in 2013. That appears to be starkly at odds with the all-round growth in that state. But then, the charts shows that this trend of a falling deposit share in Gujarat didn’t start with liberalization. Between 1973 and 1993, the state’s share went down from 7.8% to 6%. One explanation is that Gujarat is probably the state that has the highest proportion of savings in the capital markets. But even so, that proportion is not expected to be huge in 2013, given the state of the stock markets. 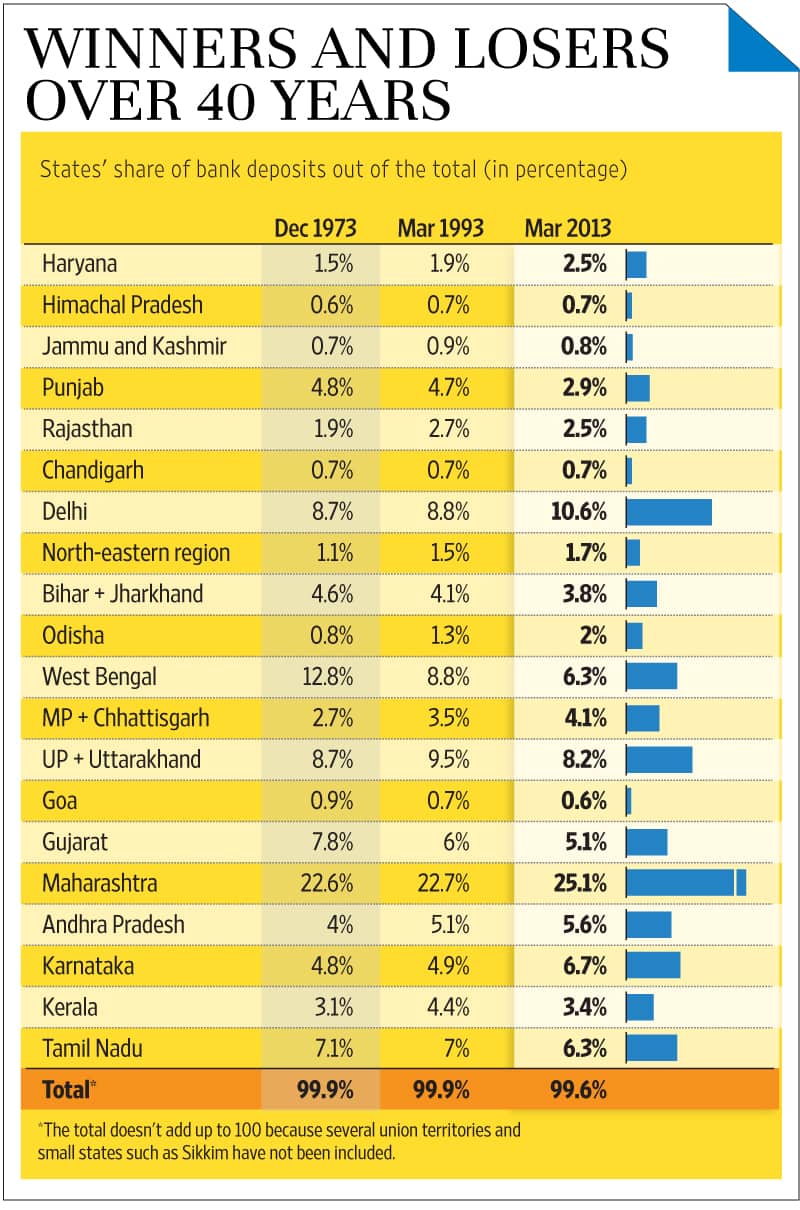 What about the winners? Delhi is a clear winner, but you have to be careful about interpreting its results. The 2013 figures represent the entire National Capital Region and remember that Delhi has the deposits of the Union government. So any change in government deposits will have a disproportionate effect on bank deposits in Delhi.

Maharashtra has been a big beneficiary of liberalization, with its share of deposits going up significantly. It now has a quarter of all bank deposits, but this is probably because of the large corporate deposits held in Mumbai. Karnataka’s share of deposits has increased sharply, reflecting Bangalore’s position in the information technology industry. Note that there was hardly any change in Karnataka’s share of deposits between 1973 and 2013. Odisha has made slow but steady progress in the growth of bank deposits in the last 40 years. And Haryana has clearly benefited from the spillover from Delhi. Contrary to popular perception, the north-eastern states have seen their share increase, albeit less than in pre-liberalization days.

What is the trend in wealth addition revealed by the deposit numbers? For that, one has to look at the share of the top 10 cities in total bank deposits. In June, these cities accounted for nearly half (47.9%) of total bank deposits. In December 1998, the earliest date for which data is available, the top 10 cities accounted for 39.9% of total deposits. Clearly, we’re seeing not just the urbanization, but the metropolization of India.