Thanks for Visiting Mint
You seem to have an Ad Blocker on. Please turn it off in order to continue, or whitelist Mint
HOW TO TURN OFF AD BLOCKER
OR
REFRESH IF YOU ALREADY TURNED OFF THE AD BLOCKER
Home >Opinion >Online-views >Shazia Mirza: stand up, tell the (funny) truth

The reason comedienne Shazia Mirza, 36, is important is not only because she is hilarious, which she is. There are many other funny women. Comic Shappi Khorsandimakes fun of her Iranian heritage in her British accent. Kazumi Kusano talks about her breasts and other Japanese unmentionables in her baby-girl Japanese voice. Margaret Cho and Gina Yashere don’t play the obvious race card and joke, instead, about lesbians or psychics. Sarah Silverman uses her Jewish faith as a segue to sex and porn. And Joan Rivers’ routine of an expletive-spewing mother who screams at her daughter for turning down Playboy magazine will make any wannabe-comic mother wish she were that cool or looked that good after menopause. 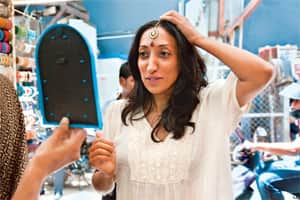 Mirza and I are buying bangles at Commercial Street, Bangalore. She is in town for her India tour, organized by Bangalore-based Ajit Saldanha as part of his ongoing effort to bring quality comedy to India. Mirza has played to packed houses in Pune, Hyderabad, Bangalore and Chennai, but curiously, not in Delhi or Mumbai. She opened her Bangalore gig at The Park hotel, where 185 screaming fans enjoyed her ethnic identity jokes that questioned everything from atheism to arranged marriage.

Of Pakistani heritage, Mirza was born and raised in England. She has a high forehead and the clear skin that comes either from good genes or frequent glycolic acid peels. Her eyes are wide and inquiring and look delighted when she smiles. A prolific columnist, writer and comic, she began her life as a science teacher. Comedy was an accident, she says. She was in a humour-writing class and the teacher saw her material and suggested she do stand-up. She now makes it to top 10 lists and is viewed as a veteran.

The first place she wants to go to in Bangalore is the post office. We wait in line and talk about her method. Writing comedy is serious work, she says. Most comics aren’t funny in real life. They are observant and have a gift for connecting disparate dots and quirky occurrences into a cogent routine that ends with a punch line. “Good comedy is about telling the truth about your life," Mirza says. “Are you angry about something? Sad about something? That’s your material. Comedy is about feelings." And sex.

Mirza takes the stamp and sticks it on the envelope. It is addressed to Prime Minister Manmohan Singh in New Delhi. Why, I ask, is she writing to the prime minister of India? “It’s an appeal from one of the charities I support," she replies.

At Commercial Street, a beggar hobbles on a cane with a cycle bell on top. Mirza hams around in a maang tikka, which makes her look like a Mughal princess. Later, at Woody’s, over some mango lassi, she talks about being a woman comic. “I don’t hold back," she says. “For example, Varun (the man who opens her act) will talk about how men will sleep with anyone. That’s a man thing. I give the view from the inside. And the women in my audience love it. They like to see someone who reflects their lives."

Stand-up is gaining ground in India, admittedly with very few women comics. Neeti Palta is funny—her writing more so than her delivery. Aditi Mittal can be funny. Outlets such as The Comedy Store and The Bombay Elektrik Projekt allow amateur comics to practise their material. In Bangalore, clubs and restaurants such as Urban Solace and Kyra host comedy nights.

India and Pakistan, says Mirza, are the last frontiers of stand-up comedy. She talks about her shows in Lahore and gives examples of her routines: about how her mother set her up with a 51-year-old Muslim man with six children who agreed to “consider her because she was a comedienne and therefore ‘bottom of the barrel’". She has a whole routine about this arranged meeting with the elderly racist Muslim gent. Her delivery is casual but her comic timing is instinctive and precise. Her Muslim identity is the butt of many of her jokes.

Doesn’t she get death threats? “No, because I don’t make fun of religion, only people," she says seriously. Her eyes wander. She takes photos. That afternoon, she is being taken to the races. What advice does she have for budding comics, I ask. “Write about your life," she says. “Obviously make it funny because otherwise everyone will be crying because everyone’s lives are quite sad."

Shoba Narayan admires Shazia Mirza. Write to her at thegoodlife@livemint.com