"storyDirectUrl"
OPEN APP
Home >Opinion >Online-views >In a word, the future is plotless

In a word, the future is plotless

In a word, the future is plotless

When I studied philosophy at university, my tutors were obsessed with free will vs determinism debate. The determinists argued that if we had perfect information about person’s nature then we could always predict how he would react in any given situation. Nonsense, said the opposite camp. Human beings had complete free will. We were not machines. The same person might respond entirely differently to exactly the same inputs in different situations. It was this free will that made us human.

One problem with the free will theory was that it ran counter to the basis of biology, physics or, indeed, science itself. The whole point of science is that once you know the rules governing anything — say, gravity or the effect of a chemical on the human body — then you can predict a specific outcome. 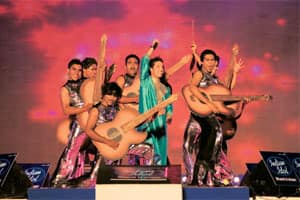 Indian Idol: On talent shows, nobody has any idea who the eventual winner will be. Photographer: Harikrishna Khatragadda / Mint

So how could the human brain be any different?

My dons — all super-bright people, but the sorts of chaps who had failed chemistry at the age of 12 and had been relieved to switch to arts subjects ever since — got around this objection by arguing that even in nuclear physics, there was a random element. There were electrons that behaved in a manner that defied all logic. So, if the basic building blocks of the universe did not follow the rules of determinism, then why should human beings?

Sometimes my tutors would call this quantum physics. At other times, they would grope for the appropriate scientific term. But as the tutorials went on, it rapidly became clear that the old bozos really had no idea what they were talking about.

These days, media and entertainment experts remind me of the bright but out-of-their-depth Oxford dons. Most of them were brought up in ageing industries (books, films, TV, etc.), all of which are on the cusp of a change. So none of them really understands the future. But they’ve picked up a few terms here and there — convergence, user-generated content, etc. — which they toss around in a doomed effort to explain the future.

There are other parallels with the free will vs determinism debate. Most fiction — across genres and media — is deterministic. A story must have a logical beginning, middle and end. Even when disbelief is willingly suspended (say, in a Superman comic or movie), the story still operates within its own rules (a bullet can never kill Superman but Kryptonite can). And even when there’s a twist — say, in an Agatha Christie novel where the least likely person turns out to be the murderer — the plot must still be logically constructed so that the twist is not entirely implausible: Hercule Poirot cannot turn out to be the murderer.

But the distinctive feature of the media/entertainment revolution is that the audience is rejecting determinism. Fewer and fewer people want a story that follows the rules. They want outcomes that can never be predicted. They seek the anarchy of true free will.

Think about it. Take the top TV shows of the last few years. If you watch a full season of, say, Heroes, you will recognize that there is absolutely no internal logic to the story. Episodes are written by different people and when episode four is being filmed, even the creator of the show has no idea what will happen in episode 12. The only priority is to surprise the audience, never mind if the plot twists are entirely illogical. Of course, Indian TV serials have no use for logic.

But most TV shows still conform to a set of rules, no matter how loosely they are applied. On the other hand, the future of entertainment is plotless. The story is that there is no story — and nobody can predict what will happen.

Consider the rise of reality TV. It has many of the qualities of traditional TV entertainment: drama, emotion, characters we like and those we loathe and even sex. The difference is not just (as has often been noted) that these are real people — frankly, they might as well be invented given that we had never heard of most of them before. The real point is that nobody knows what is going to happen next. There is no plot line. There are no writers planning the story. Even the producers of, say, Big Brother have zero control over events.

On the talent shows (say, Indian Idol or its foreign originals), nobody has any idea who the eventual winner will be. So many millions vote that the outcome can never be fixed. Once again, the key to the appeal of such shows is sheer unpredictability — the sense that anything can happen.

What’s the difference between games and movies? Well, the similarity is that the games often license movie characters from such franchises as Star Wars and James Bond. But once you start playing a James Bond game, you enter a completely different world from a Bond movie. In the film, there’s a traditional plot. You pretty much know what the end will be even before you enter the theatre. But in a video game, a multiplicity of outcomes is possible. And each time you play it, something completely different will happen.

That’s free will. Not the determinism of the Hollywood screenplay. My guess is that while user-generated content (the YouTube model, for instance) is as important as the media mavens say it is, they’ve missed the real point.

We live in a world where people are tired of being told stories. They are fed up of the predictability of traditional fiction. They want surprises. They want to throw away the rules of logic. And they want outcomes that nobody can ever predict or control in advance.

If my old dons are still teaching those courses, then here’s a word of advice: Forget about quantum physics for your example of free will, guys. Try using the entertainment revolution instead.