Guessing game on interest rates to continue this week

Guessing game on interest rates to continue this week

Economic indicators remained positive across the US and Europe, well supported by financial numbers of heavyweights such as Oracle Corp. and Research in Motion Ltd, maker of the BlackBerry phone. A reassurance from Federal Reserve chief Ben Bernanke that US interest rates will remain low was also a big positive for the US and world markets. The Chinese market was the big drag last week as it fell 4.1% following tough new proposals by banking regulators and tighter curbs on buying of government land. 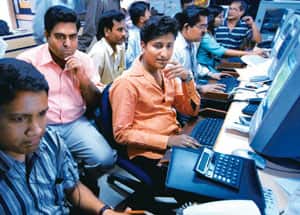 Keeping low: Last week’s downtrend in the markets may continue for some time this week as well. Abhikit Bhatalekar/Mint

Back home, there are no major economic events due this week, although the guessing game about an interest rate hike will continue. A marginal hike of 25 basis points (a quarter of a percentage point) in key interest rates or an increase in the cash reserve ratio—the proportion of deposits that banks need to hold in reserve with the central bank —should have been discounted by the markets long ago. Third-quarter company results, which would start flowing in early next month, would throw light on the state of the Indian economy and the strength of its recovery.

Technically, the downtrend witnessed last week could extend to the initial part of this week as well, as key technical indicators are pointing south. Since benchmark indices have fallen below critical levels, there could be some pressure on the downside. The decline is not expected to be steep and there would be bargain hunting on dips.

In terms of the Bombay Stock Exchange’s Sensex, on its way up, the first resistance is at 16,902, which is a crucial level, and if broken, could trigger buying. It will be followed by resistance at 17,042 points, which could force some consolidation. The Sensex faces its next resistance level at 17,272 points, which would decide the trend in the short term. On its way down, the first, moderate support for the index will come at 16,678, followed by strong support at 16,517 and 16,390.