The problem with exports

India's exports contracted by 0.3% last month from a year ago, compared to a 6.86% contraction in July, but that's no cause for celebration 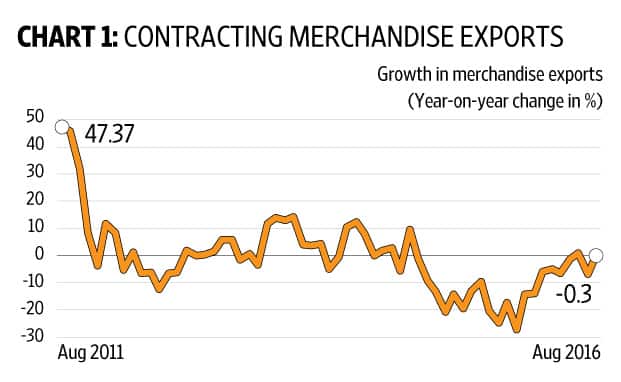 Nor have services exports been doing well. July saw a contraction of 4.56% from a year ago. Chart 2 shows the trend. How important are exports for India? Cast your eyes on chart 3. It shows how the acceleration in economic growth during the boom years of the noughties was a time when the proportion of exports of goods and services to GDP rose very sharply. The increase in the exports/GDP ratio continued till 2013-14, thanks to the diversification of exports growth from the struggling Western economies to other regions. Since 2014-15, however, the ratio has been falling, and in the first quarter of the current fiscal year, it fell to a level lower than during the slump of 2009-10, after the Lehman crisis. Essentially, this means the Indian economy is running only on one engine—that of consumption, since the investment and export engines are shut down.

Are exports sluggish only because of lower prices? Not really—chart 4, taken from the CPB Netherlands Bureau for Economic Policy Analysis, shows exports from emerging Asia are lower than a year ago in volume terms. So, it’s not just the price effect, volumes are also falling. Chart 5 shows the crux of the problem. Notice how trade volume growth was much stronger than growth in world GDP, starting from the late 1980s right up to the years before the financial crisis. Those were the heydays of globalization. Recently, reports have started appearing about how the relocation of supply chains has run its course and most of the incremental advantages from the integration of India, China and the erstwhile communist nations have been realized.

Will a depreciation of the currency help? Chart 6 shows that, according to Bank for International Settlements data, India’s currency is neither overvalued nor undervalued. However, the chart also shows that India’s real effective exchange rate has gone up substantially since January 2014, more than several of its Asian rivals. But then, that is a consequence of the inflows India has been getting, thanks to its strong growth and reform initiatives.

Manas Chakravarty looks at trends and issues in the financial markets. Comments are welcome at manas.c@livemint.com