On the face of it, music and art ought to be universal. Stands to reason. Beauty, rhythm and harmony are inbred into our bones; simply a matter of scale and proportion. Haven’t we heard it said?

Music is a universal language. 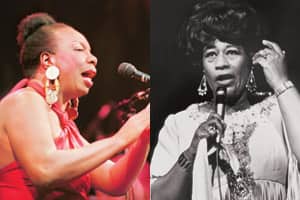 Simone (left) knew ‘bhava’ and Fitzgerald was the goddess of ‘gathram’

Opera belongs to Europe but the Germans and Italians have a particular hold over it, given that some of the greatest operatic lyrics are in their languages. To watch a Jamaican lass shake her booty to the sound of Bob Marley is to know that rhythm belongs to the Caribbean. Chinese music sounds like high-pitched drivel to me, but there are rabid fans of Chinese opera, and I certainly (with my views) don’t want to encounter them. This, then, is the contradiction of music. It ain’t universal; it is deeply regional.

Thankfully, for most of us music can transcend regional boundaries with a simple tool called knowledge. Anyone, just about anyone, can partake of the musical delights of another culture with enough study and learning. Jon Higgins, an American boy who spent years in Chennai learning Carnatic music, ended up performing at the Music Academy clad in a white dhoti and red tilak. Many foreigners come to India to learn our dances, and through accumulated knowledge gain an appreciation of our art forms that is sometimes better than our own. Similarly, my fellow columnist waxes eloquent about The Beatles with an intensity that would surprise a native Liverpudlian.

Some things help when you seek to understand music that is different from your own. It helps if the music has some similarity to the music you grew up with, if not in the sound of it, at least in the form of it. Jazz music, for instance, is very similar to Indian music in its structure and form. It also happens to be the non-Indian music I love best. I happen to think—quite objectively I assure you—that jazz music is among the most sophisticated musical forms ever invented. The fact that it sounds like the Indian classical music I love is an added bonus.

Consider: The three things that distinguish Indian music are raga alapana, bhava, and tala. Alapana is the free-form raga exposition that a musician does before the structured constraints of a kriti or song. Simply told, alapana is like jamming in jazz. It is playing with sound. It is allowing your voice or instrument to soar and fall according to your musical whim or genius. It even incorporates elements of the ‘scat’ singing that Louis Armstrong made famous. When you listen to the best ustads, you will see them make up ‘scats’ as they go along.

Bhava is emotion. Most Western classical music (opera excluded) studiously avoids bhava. Take any symphony, even by composers as passionate as Mahler and Tchaikovsky, and there is no bhava or emotion. Western concertos are all about structure and form. Jazz, on the other hand, revels in bhava. Blues, Ragtime and Soul, not to mention Gospel, take this one step higher. If you listen to Nina Simone sing, you will know bhava. Not her Sinnerman, which was made sexy by the film Thomas Crown Affair, but her older songs. Simone took pride in conveying emotion in her music. During concerts, her songs would veer from joyful to tragic to soulful to silly in the course of a half-hour. That is bhava.

Indian tala or rhythm is sophisticated, yes, but no more so than the complex Caribbean rhythms. The tala that approximates our Indian rhythms the best is jazz syncopation. There is the time in the beginning of the concert when the musician is jamming (or doing an alapana) when the drums are silent. Then there is the structured part when the drums take up joyfully. Then the rhythm changes—suddenly, quixotically, according to the mood of the musicians. When John Coltrane played with Miles Davis or with Thelonious Monk, they each changed the rhythm or tala of a piece at whim. That was the joy of jamming. But underneath all this creativity, was a broad structure. Jazz riffs, for instance, are passages that epitomize a composition. In Carnatic music we have the same thing and it is called varnam. Varnams are passages that epitomize a raga. Students practise it over and over again to get a feeling for the raga. Jazz riffs perform exactly the same function.

Tonality of voice is also something that jazz singers have in common with Indian music. The tones of Western opera are completely different from Indian music. The soprano sounds too high and tenor, too low. Simply said, it sounds like shrieking. An opera pitch is way high—too high, too false—for an Indian ear. But when you hear a jazz singer, even someone as overexposed as Ray Charles sing that clichéd classic What’d I say, the average Indian ear can relate. You can nod to yourself and say, “That man’s voice has gathram."

Gathram is a very particular Indian fetish, one that is common to both Hindustani and Carnatic music. It means tonality and depth of voice, but it also implies that the voice should not be too sweet. D.K. Pattammal, for instance, had excellent gathram, but her voice sounds hoarse and man-like to the untutored ear. Most Hindi film singers (the women) have so-called sweet voices, but are devoid of that particular nuance called gathram. A little coarseness, a few rough edges are necessary to convey the soul of a song; so the saying goes in Carnatic music circles, and as it happens, in Hindustani music as well. Ustad Abdul Karim Khan was famous for turning down disciples because they had too-sweet voices.

Jazz singers too covet gathram. Sure there are the dulcet-voiced ones such as Natalie Cole, but the true jazz greats had a shade of roughness to their voices. More important, they were not afraid to show it off. Ella Fitzgerald, regarded by many as the greatest jazz vocalist of all time, wasn’t afraid of going nasal when she hit the high notes (Take the A Train); many times she sang in a scratchy voice as if she had a cold; she purposely mangled words. But boy, the feeling of the song: that, she didn’t touch; nay, she enhanced. That is gathram.

Part of the joy of a jazz concert is to watch the riffs between the various musicians; to watch the saxophonist pick up on the trombone and take the musical phrase to a completely new place. This happens frequently in Indian music concerts as well. The singer will sing a raga, the violinist will interpret the same raga in a different way; both of them will enjoy each other’s display of virtuosity. If this were done at a concerto, the violinist would have been fired for being too individualistic.