The frenzy with which applications for service licences have been piling up at the doors of the department of telecommunications (DoT) does indicate a ‘gold rush’, as at least one media report described it. That the applicants for the unified service access licence are from a range of sectors including real estate, infrastructure and even consumer goods, has added to that impression. The reason for the rush being touted now is the huge, growing opportunity that India’s mobile telecom market offers.

But, the real reasons lie elsewhere, and are cause for growing concern. The current situation mainly shows how the government has created chaos that could have been avoided had it laid out comprehensive policy guidelines and had it opted for the global best practice of auctioning the licences and the radio spectrum needed to provide services. Instead, it is persisting with its typical non-transparent approach on the process of deciding who would get the prized licence and, the even more prized radio spectrum.

The fundamental problem is the allocation of the premium resource called spectrum. And the waiting list—now nearly at 200—includes existing mobile operators seeking expansion of capacity, new licensees not yet allotted spectrum, as well as a large bunch of new applicants for licences. The Telecom Regulatory Authority of India (Trai), in its guidelines of 29 August, had pointed out that the practice of a certain amount of spectrum coming with the licence for 2G services was not the right approach and also that the pricing of spectrum was discovered in 2001 when the telecom market was growing at a fraction of the pace seen today—and therefore, the spectrum was not being valued at its true market price now. Sadly, Trai did not have the courage to say further allocation should be through an auction, which would determine that true value—actually more than four times the Rs1,500 crore being charged within the licence. 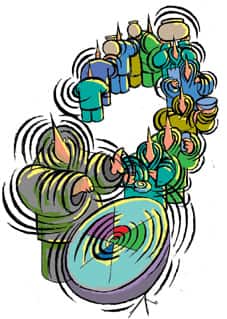 With DoT deciding it would allocate spectrum on a first-come-first-served basis, the build-up in the queue of applicants for fresh licences for 2G itself became huge, too. This has led to the widespread perception that multiple applications were coming in both from players under proxy names to circumvent existing cross-holding rules, and from non-serious players—anyone would think it worthwhile to get into the line for the possible high gains from owning the spectrum, since they could sell out at huge valuations.

After creating such chaos itself, DoT has reacted with several arbitrary moves over the past week. This has led to even more concern now about the scope for back-door manipulation given the lack of transparency. A panel set up by DoT will determine final criteria for selecting applicants after (!) the ad hoc cut-off date of 1 October for applications that it announced just a few days ahead of that date. Not only does this spell arbitrariness, as award of licences gets linked to the speed at which potential entrants can complete the not-insignificant paperwork but also, creates scope for those who can ‘buy’ inside information about what constitutes an eligible application. The cut-off also contradicts one of the few concrete, sensible recommendations from Trai—there should be no cap on the number of players. It seems in violation of the Trai Act, where Section 11 stipulates that if DoT rejects Trai’s advice, it must revert to the regulator for further discussion.

Open auctions are the best way to get serious players, who will value the spectrum at its market price.

Is DoT treating the spectrum issue appropriately? Write to us at views@livemint.com