The president of the European Central Bank (ECB) had finally announced his plan that would save Europe. ECB would buy bonds of remaining maturity of one to three years of European nations that have signed up to some austerity programme with the relevant European authorities. There is no limit to the amount of such bonds ECB would buy. There are no collateral requirements that these nations must post for ECB to buy their bonds. Further, ECB has waived its seniority of claims over private creditors. 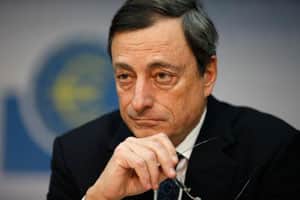 All that is required for the inflation impact to be confirmed is for the US Federal Reserve to join the party hosted by the ECB president. Photo: Ralph Orlowski/Getty Images

Everything else being equal, when someone chooses to produce something in unlimited quantities, both its price and value must drop.

Investors put their and others’ money on the line and they should be sceptical. Not only should they be sceptical of the efficacy of the announced programme, but also of whether the programme would be implemented faithfully and fully. They should demand a higher risk premium when unconventional measures are announced simply because such things have not been done before. The market reaction is, of course, the opposite.

Clearly, except the faithful few, not many believed that stock markets were efficient, no matter whichever way one interpreted “efficiency". But, in recent years, even these faithful few must have slithered away quietly. Stock investors have shown themselves to be efficient in their moronic responses to bizarre policy experiments because they have been drugged by cheap money.

Stock markets might have been efficient when they were segmented and capital was not so egregiously mispriced as now. However, in recent years, the rise in the indices of greed and hubris has gone hand in hand with the decline in the indices of reason and efficiency.

Bare Talk does not intend to waste much time examining whether Italy and Spain would sign up to conditions to be able to receive ECB funding especially when their borrowing costs have come down substantially in recent weeks. Whether the borrowing costs are low enough for their budgets and economies to benefit is altogether a different question. After all, the 5%+ nominal yield on the 10-year Italian and Spanish bonds are still a lot higher than their nominal gross domestic product growth rates.

Therefore, while the growth impact of these unprecedented measures is doubtful, what is not in doubt is the impact on inflation. That is what the recent rise in the price of gold reflects. All that is required for the inflation impact to be confirmed is for the US Federal Reserve to join the party hosted by the ECB president. If the Federal Reserve were looking for an excuse, it got it in the form of the monthly labour market report for August on Friday. Manufacturing employment declined. Household employment declined for the fourth month in the last six months and estimated jobs created for the previous two months were revised lower.

That monetary stimulus does nothing for people at the bottom rungs of the economic pyramid was evident in the zero rise in the average hourly earnings for US private sector workers in August. The annual rise in average hourly earnings was a modest 1.7%. The daily average unleaded petrol price crested $4.1 per gallon in July 2008. In recent years, it has made two unsuccessful attempts to go over $4 per gallon. It may be “lucky" the third time if the Federal Reserve too decided to do all that it takes to save the American worker. The irony would be lost on Wall Street and policymaking elites, but not on the worker who would pay more for petrol at the pump.

Living life the maximum in the shortest possible time has been the defining feature of the seven decades since the War. That has taken a heavy toll on natural, intellectual and emotional resources. The crisis of 2008 was an opportunity to turn back from this paradigm that had become unsustainable. The lessons have not been heeded.

Apparently, Jayaprakash Narayan of the Lok Satta Party often remarks that change is inevitable when status quo is unsustainable. Elites have now prepared the stage for the inevitable change to arrive. The pursuit of growth at all costs will soon result in all costs and no growth for them.

V. Anantha Nageswaran is the co-founder of Aavishkaar Venture Fund and Takshashila Institution. Comments are welcome at baretalk@livemint.com.