Manufacturing is the biggest positive contributor to aggregate employment elasticity in the country, a fact which might appear counter-intuitive to many

New Delhi: One of the biggest criticisms of India’s high growth trajectory this century has been its failure to generate jobs. Economists attribute this phenomenon to a decline in employment elasticity of output, which means that the same amount of output growth creates fewer jobs than it used to. Intuition might suggest that the fall in employment elasticity must be a result of change in the nature of technology from labour-intensive to capital-intensive. Such an argument would also suggest that the manufacturing sector must be responsible for the deceleration in job growth.

A recent Economic and Political Weekly paper by Deepankar Basu and Debarshi Das, economists at the University of Massachusetts, Amherst, and IIT Guwahati, suggests that this might not be the case.

Manufacturing is not the villain. Basu and Das find that it is agriculture that has made the biggest negative contribution to aggregate employment elasticity in recent years. This is both understandable and desirable, since agriculture employs a disproportionately large number of people in India. Manufacturing, on the other hand, is the biggest positive contributor to aggregate employment elasticity in the country, a fact which might appear counter-intuitive to many In fact, manufacturing has had the highest employment elasticity among all sectors in India in two out of three periods used by Basu and Das since 1999-2000. These results should be read with one caveat. In the authors’ analysis, manufacturing also includes construction.

So, what explains jobless growth in India?

These facts underline the importance of programmes such as Make in India to tackle India’s employment challenge. However, making such programmes successful would require swimming against the tide, shows a 2015 paper by Princeton economist Dani Rodrik. Traditionally, countries are expected to move on a transformation path of agriculture giving way to industry and industry ceding dominance to services. Service sector dominance is expected to arrive at very high levels of income. Rodrik’s paper shows that developing countries have been reaching their peak shares of income and employment in the industry at much lower levels of income in the post-1990 period. 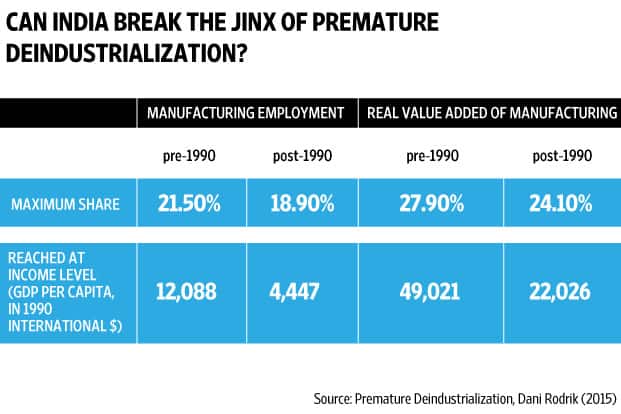 This, Rodrik argued, was reflective of premature closing of the window of opportunity to increase jobs and incomes through employment. Rodrik’s paper found Asian exporters to be an exception to this adverse trend.

Can India also accelerate its manufacturing by exploiting the export route? Recession in the US and advanced countries act as a double whammy to this task. The general sluggishness in export demand is a well-recognised impediment. Growing employment challenge and resultant focus of the US and the EU to revive their domestic manufacturing might make this task even more difficult.