"storyDirectUrl"
OPEN APP
Home / Opinion / Twenty-five years on, where are the jobs?

Twenty-five years on, where are the jobs?

The biggest failure of economic liberalization has been its inability to provide good jobs in the formal sector. In fact, employment for men in the organized sector, decent jobs that pay regular wages with benefits such as provident fund and gratuity and job security, shrank in the 15 years between 1997 and 2012. The total number of men employed in the organized sector, according to the latest Economic Survey, was 23.53 million as on 31 March 2012, the last date for which information is available. That includes employment in both the public and private sectors. But in 1997, the number of males employed in the organized sector was 23.61 million. Remember, this is the period that saw some of the best years for the economy, with very strong growth in gross domestic product and a boom in the stock markets. Nor did the global financial crisis have anything to do with it—in 2007, before the crisis hit and at the peak of the economic and market boom, the number of organized-sector jobs for men was 21.96 million, much lower than in 1991. Chart 1 has the dismal details. 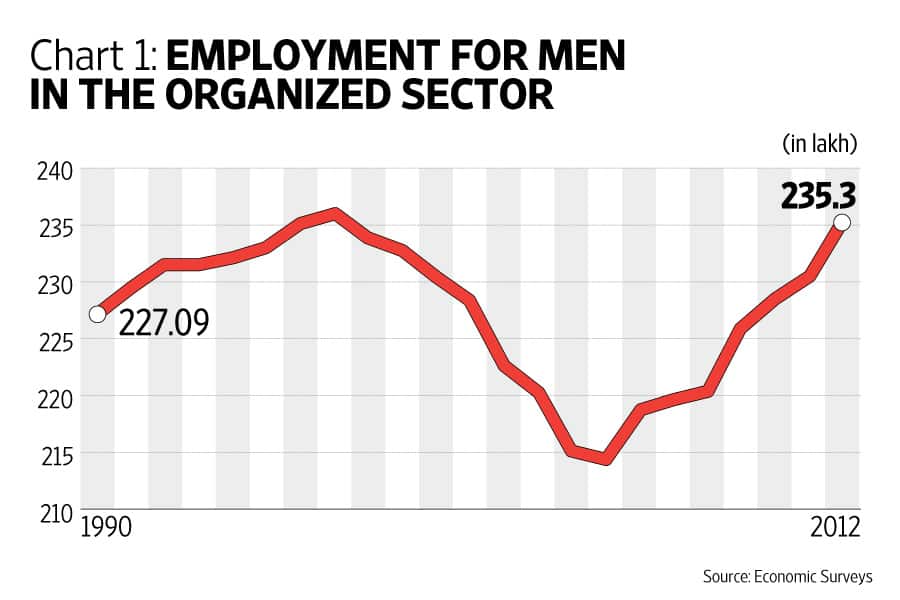 Sure, the years after 2012 would have seen some job growth, but it’s unlikely to be a lot, simply because the corporate sector has been having a rough time.

These numbers for women’s employment seem to be at odds with their decline in labour force participation. All it means is women no longer want to do back-breaking ill-paid work as labourers. Given an opportunity to get decent jobs in the organized sector, they would grasp it with both hands. The rise in women employed in the formal sector is also the result of better education for girls, changing attitudes towards work and a preference for employing women in labour-intensive industries.

What about total employment in the organized sector, including both men and women? In 1991, it was 26.73 million; in 2012, it was 29.58 million. That’s a gain of just 2.85 million jobs in 21 years. Is this all that liberalization could do? Given the huge number of young people joining the Indian workforce, the increase in organized-sector jobs is a drop in the ocean.

Part of the reason for the decline is the fall in public sector employment, a good thing given the number of sinecures there. But employment in the organized private sector has also been pathetic, going up from 7.68 million to 11.97 million between 1991 and 2012, a rise of a piffling 4.29 million in 21 years—see chart 2. Total employment in organized-sector manufacturing went up from 6.33 million in 1991 to 6.6 million in 2012. 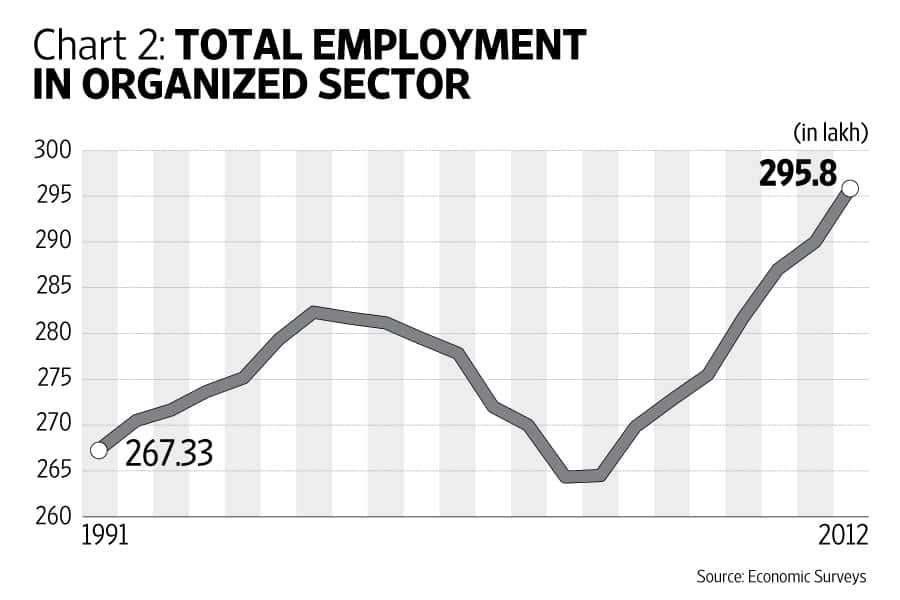 The reasons for the lack of growth in the organized sector are well-known. At the top of the long list are restrictive labour laws. But companies have found ways of working around these laws by employing contract workers. Data from the Annual Survey of Industries shows that 13.5% of workers in the manufacturing sector were engaged through contractors in 1991-92; by 2011-12, this had increased to 34.7%. Whether the recent tweaking of labour laws by some states will increase the proportion of regular employees therefore remains to be seen. More worrying is the capital-intensive nature of modern manufacturing.

Since getting a job in the formal sector is a lot like winning a lottery for most people, how have they survived? They have had no alternative but to rely on ill-paid and insecure jobs in the informal sector. The Economic Survey points out that wages are, on average, more than 20 times higher in the formal sector. Putting it bluntly, times have changed and today’s young people won’t be content making a precarious living selling bananas on street corners. Unless we can give the masses a decent share of the gains from liberalization, we are likely to see increasing crime, political unrest and violence.

To read articles from Mint’s ongoing series on 25 years of liberalization, click here.