Politics and violence in Orissa

Politics and violence in Orissa

Why have India’s tribal-majority districts witnessed the bloodiest anti-Christian attacks? The answer to this question indicates why at least 60 people were killed and more than 4,500 houses and churches destroyed in Kandhamal district of Orissa recently. 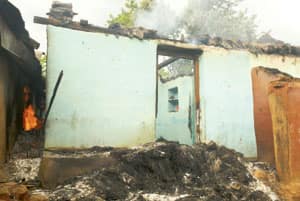 The Sangh Parivar worked in tandem with the BJP to “Hinduize" tribals. For instance, the Ekal Vidyalaya (one-teacher school) Foundation was registered as a “charitable" trust in 1999. It is well known that these schools, that operate mainly in tribal areas, seek to “Hinduize" tribals and oppose conversions among them. The BJP government aided these schools. More recently, Sangh outfits made an overt attempt to “Hinduize" tribals through the Shabri Kumbh rally in Dangs in February 2006. Shabri, a character in the Ramayan and tribal devotee who offered berries to Rama, was made into a goddess of the tribal population there.

Tribals form only around 9% of India’s population, but their votes are crucial. This is why BJP leader L.K. Advani launched his Sankalp Yatra from the tribal district of Jabalpur in February with an eye on the forthcoming elections in Madhya Pradesh. Later, Prime Minister Manmohan Singh laid the foundation stone of a new rail line in Jhabua, another tribal district in the state.

However, wooing tribals has not been easy for the BJP, which faces not only the Congress as an opponent, but also Christian missionaries. Christian agencies have been working in tribal areas for much longer. Due to their good development record and social acceptance—evident in the fact that a portion of the tribal population today is Christian—the BJP finds it difficult to compete with them and undermine their influence. Therefore, the BJP and other Sangh organizations launch hate campaigns and attacks on Christians under various pretexts, including that of “forced" conversions.

That the Sangh’s anti-Christian agenda is more about politics than conversions is clear from the fact that Christian persecution is not endemic in Dalit-majority districts, although a majority of Indian Christians (around 70%) are from Dalit backgrounds. This is why Dalit districts—such as Sitapur, Hardoi and Azamgarh in Uttar Pradesh; Jalpaiguri, Cooch Behar, Nadia, South 24 Parganas and Bardhaman in West Bengal; and Gaya in Bihar—have not witnessed any major anti-Christian riot though Christian agencies are working there as well. On the contrary, a majority of tribal districts—be it Jashpur in Chhattisgarh or Banswara in Rajasthan— have long been communally sensitive. The reason is clear. Wooing Dalits is an uphill task for the BJP, as it is seen as an “upper caste" party and Dalits are well organized and support parties such as the Bahujan Samaj Party. The tribals, however, fall in the indecisive vote category.

Even in Kandhamal, Sangh outfits “befriended" the majority tribal community and not the minority Dalits, many of whom converted to Christianity in the last 100 years or more. What’s more, the Vishwa Hindu Parishad (VHP) fuelled tensions in an already strained relationship between the two communities by using reservation and land issues. Exploiting these tensions, the Sangh organized a deadly wave of anti-Christian attacks using the unfortunate assassination of VHP leader Swami Laxmanananda Saraswati in August as a pretext. This is why when the Orissa Police recently confirmed the role of a Maoist group, that had claimed responsibility for the murder, a Sangh outfit circulated forged documents to implicate a local church.

Recall the attacks on Christians and their property in Kandhamal in December 2007 over an alleged attack on Saraswati—although there were no visible injuries on his body. Recall the 2004 Jhabua violence, which erupted after a nine-year-old Hindu girl was found murdered in a Christian school—a Hindu man was later arrested for the murder. Recall also the 1998 Dangs attacks that were launched after an alleged attack on a Hindutva rally—an allegation that had no evidence.

That the Orissa violence was organized is also clear from the fact that what started in one district soon spread to more than 14 districts of Orissa and several other states, mainly BJP-ruled Karnataka and Madhya Pradesh. This at a time when several state assembly elections as well as national elections are around the corner.

Vishal Arora is a Delhi-based commentator. Comments are welcome at theirview@livemint.com