Naga peace and deals within the rebel structure

The peace deal is not all about a deal with India, or the Naga homelands. It is also about deals within the rebel structure

When Ningkhan Shimray formally took over as army chief, or longvibu, of the National Socialist Council of Nagalim’s Isak-Muivah group, or NSCN (I-M) earlier this week, it signalled more than an appointment. My conversations with some insiders point to seismic shifts and churn within the rebel structure.

Equally, the dynamic of Shimray’s appointment goes beyond NSCN (I-M), because high-level moves within a rebel construct can affect which way the winds blow as the confounding peace process with the largest Naga rebel group attempts to work itself towards an endgame. 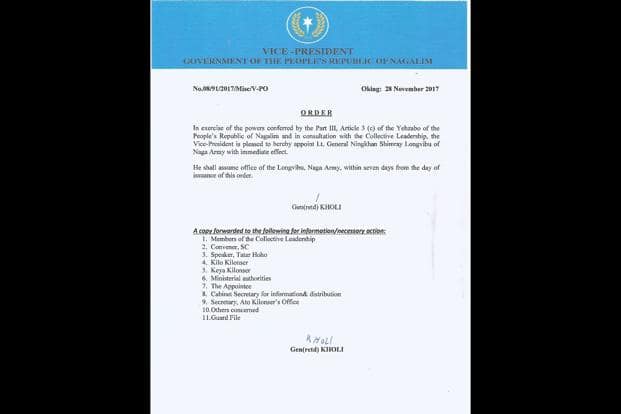 Shimray, better known as Anthony Shimray, was the group’s key arms procurer until his arrest in Kathmandu—NSCN (I-M) maintain it was abduction—in late-2010. Shimray was allegedly in Kathmandu to work a grey-market arms deal. He was released from Delhi’s Tihar Jail in August 2016, a year after government of India signed what is called a framework agreement for peace with the group.

Perhaps amazingly for outsiders, but not for those acquainted with the blurred underground-overground among Nagas, Shimray was within days fêted by a Delhi-based Naga students’ organization at a public function at Nagaland House in New Delhi. This, at the official representation of the government of Nagaland, where legislators, officials and hangers-on stay when they visit Delhi.

Shimray spoke then about being “faithful to the vision of God". He added, alongside praising the government for his release for the sake of the Naga peace process: “I am just a follower, and I am not the leader. I want to be a faithful follower till the end of my life."

This is where the twist lies. From all indications it’s all about who will be a good follower.

Thuingaleng Muivah, the M in I-M, general secretary of NSCN (I-M) and boss of the outfit’s administrative apparatus, remains sharp but is ailing. His colleague Isak Chishi Swu, the I in I-M, died in June 2016. I have written in this column about the jostling for advantage among the creamy layer of leadership after Swu and Muivah. In that two former longvibu, the near-legendary V.S. Atem and his successor, Phungthing Shimrang, were in play. Alongside was Muivah’s nephew Grinder Muivah, most notable for his arrest in 2000 on the charge of attempting to hijack an Indian Airlines plane from Aizwal to Kolkata, evidently as to have his uncle released from a Thai jail. Grinder was later released.

Subsequently, Grinder evolved a career as a successful businessman in the National Capital Region with few queries as to corpus and capital infusion—not entirely unknown among a class of Nagas. He was also a liaison between rebels and the government.

Grinder died in April 2016. He was seen by many as Muivah’s heir-apparent, a mantle now passed to other relatives, of which more later. Anthony Shimray sits better with this succession.

Meanwhile, Shimrang, despite official paeans is being privately painted as a fall guy for having become ineffectual while pursuing the good life. That is ironical. Naga rebel leadership, indeed, much rebel leadership in North-East India has hardly been known for frugality after initial years of ideologically-led battle. Anyway, Shimrang is being painted by some as a liability.

It’s a bit of a fall from being the person who kept the pace of recruitment, arming, and generally being the enforcer of a parallel administration in Naga homelands—a bizarre reality that ceasefire rules permit, officially as well as with a large wink. Like Atem, this is a hardened man, but more recently given, as I was given to understand, to carrying on some policies and operations which were not always approved of by what is known as the collective leadership—or, indeed, by the senior Muivah himself. Shimrang is not a man to give up; and NSCN (I-M) is not a guaranteed family show.

For all his talk of Christ and His glory, Shimray too is a hardened man, with intimate knowledge of the group’s weapons pipeline, and experience at handling operations of the overseas—or Allee—command in Bangladesh, for instance. He is expected to carry through Shimrang’s unfinished agenda of preparing ground in Naga homelands and in sanctuaries in Myanmar in case the peace deal doesn’t work out to NSCN (I-M)’s advantage; while remaining a bulwark right here at home to ensure it does.

But the peace deal is not all about a deal with India, or the Naga homelands. It is also about deals within the rebel structure. I would keenly watch that space.

Sudeep Chakravarti’s books include Clear.Hold.Build: Hard Lessons of Business and Human Rights in India, Red Sun: Travels in Naxalite Country and Highway 39: Journeys through a Fractured Land. This column, which focuses on conflict situations and the convergence of businesses and human rights, runs on Thursdays.

Respond to this column at rootcause@livemint.com