Education and aspirations in India

If there is one single thing that can completely rewrite the Indian social landscape, then it has to be education. It is, as Nelson Mandela famously remarked, “the most powerful weapon which you can use to change the world." Unfortunately, over the last six decades, despite impressive progress in literacy levels and full enrolment at the primary school level, the quality deficit in education has only widened. Official data released earlier this month is cause for both hope and despair. The latter because it only reaffirms that India has a long way to go before it comes close to achieving desirable outcomes in education. At the same time, it does hold out hope because it confirms that education is a key component of the aspiration matrix of Indians, and that citizens are no longer willing to wait and will go the extra pecuniary mile to realize them.

Data released by the National Sample Survey Office (NSSO) this month reveals that a fourth of India’s students were availing of private coaching in 2014. This proportion was a fifth six years ago. 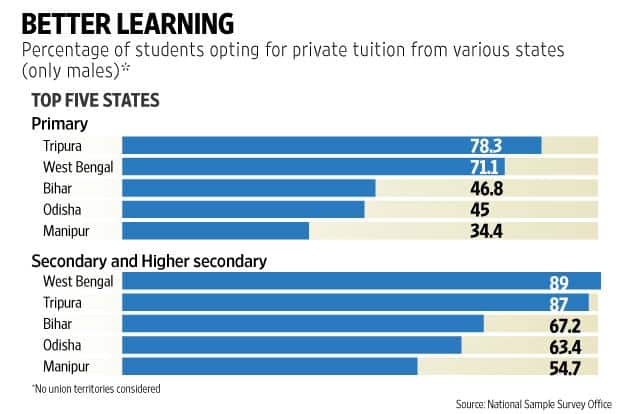 In states such as Tripura and West Bengal, the proportion of students taking private coaching is nearly 80%—more than thrice the national average in 2014. A colleague in Mint wrote a larger piece around this trend and the table with that report ranks the states on spending.

To labour this point further, the NSSO data is revealing in that the share of private coaching in total education spending, for both rural and urban areas, has grown significantly. It rose from 10% in 2008 to 14.1% in 2014 for rural areas and 13% to 16.5% for urban areas over the same period. This desire for private coaching may be inspired either to make up the deficit in education standards or to gain an extra edge for students. Going by anecdotal evidence, it is more likely than not that this trend is motivated by the desire to bridge the deficit in education.

And, of course, we have the humbling findings of the Programme for International Student Assessment (PISA), coordinated by The Organisation for Economic Co-operation and Development (OECD), which in 2011 ranked India all but last among 74 participating countries in learning—mathematics and reading skills—standards. While China topped it, Kyrgyzstan was last behind India.

It is this massive deficit in education capacities which drives what Professor Amartya Sen described as capability deprivation—which in turn defines inequality of opportunity. Sen believes capability poverty to be more significant than income poverty. The former refers to deprivation of opportunities, in this case, of good quality education.

An obvious corollary is that if you invest in education (something for which the Aam Aadmi Party should be given credit, doubling the annual spending commitment on education in its first state budget presentation for Delhi) you address capability deprivation. Other states will hopefully take the cue from AAP, as the onus of spending on social programmes in future, after the implementation of the recommendations of the Fourteenth Finance Commission, is on them. Since the NSSO survey reveals that this is a key means of fulfilling aspirations, especially in a population where 65% is younger than 35 years, it will be politically prudent too, something that AAP has seized upon. It is all fine to blame the Union government, but eventually, the state’s citizens will hold them accountable.

The good news for states is that new tools are available to ensure there is more bang for the buck. Recently, the Union government released part of the data on the Socio Economic Caste Census (SECC). Most of the attention has been reserved for its failure to release the caste data, little on the rich socio-economic data.

Conducted in 2011, the SECC provides a deprivation profile of the rural populace using parameters such as education, skills, housing, employment, health, nutrition, drinking water, sanitation, social and gender mobilization. And since this data is publicly vetted by the village council, the state government can actually tailor its spending to address deprivation—like education.

At present, the approach is largely of one-size-fits-all. Since the onus of spending is now on states, they have the means to adopt suitable spending priorities and using the deprivation matrix of the SECC to target expenditure.

Clearly then, recent data signals Bharat’s desire to realize its aspirations through access to better quality education. Presumably, politicians will read the writing on the wall.

Anil Padmanabhan is deputy managing editor of Mint and writes every week on the intersection of politics and economics. Comments are welcome at capitalcalculus@livemint.com. His Twitter handle is @capitalcalculus