The declining growth efficiency of credit

With bank credit a less efficient engine for delivering GDP growth, the debate should shift to other elements driving growth

That credit-fuelled boom-bust cycles are common globally has been adequately reinforced by the financial crisis. But in India, where the loan-to-gross domestic product (GDP) percentage is just in the fifties, this discussion has largely remained academic. But we need to look at it differently, now that banks are being exhorted to expand lending in the belief that it will reignite faltering economic growth.

Over the past five years, it has become fashionable for banks to make statements like “an 8% GDP (growth rate) should lead to a 24% credit growth as there is generally a 3x relationship". It is conceptually flawed apart from being overly simplistic: the statement tries to link nominal loan growth with real GDP growth, even more problematic with inflation during this period ranging from negative to 12%. This ratio too has fluctuated widely—it has been significantly more than 3x in good times and below that in bad times. But it subliminally holds an important message that often gets overlooked—the banking system currently considers loan growth to be a derivative product of GDP growth and not the other way round.

Krittika Banerjee’s (RBI Working Papers, December 2011) seminal study on this subject could provide a helpful tool for policymakers. The key conclusions of the study as follows.

Fourth, “...Credit intensity ... is the largest for the manufacturing sector.... It has also shown a steep rise since 2003-04". Also, “...Indian manufacturing and services sectors, taken together as the non-agricultural sector, exhibit a one way causality from GDP cycle to non-food bank credit cycle."

Extending the focus of Banerjee’s study, we notice that when observed in entirety over a long period of time, India’s credit intensity of growth has increased remarkably, along a third order polynomial trendline (Fig 1). That is, it has increased consistently, and the spurt in recent years has been higher. In other words, over the years, India has required more credit to deliver the same unit of GDP, viz. credit has become less efficient in delivering growth. 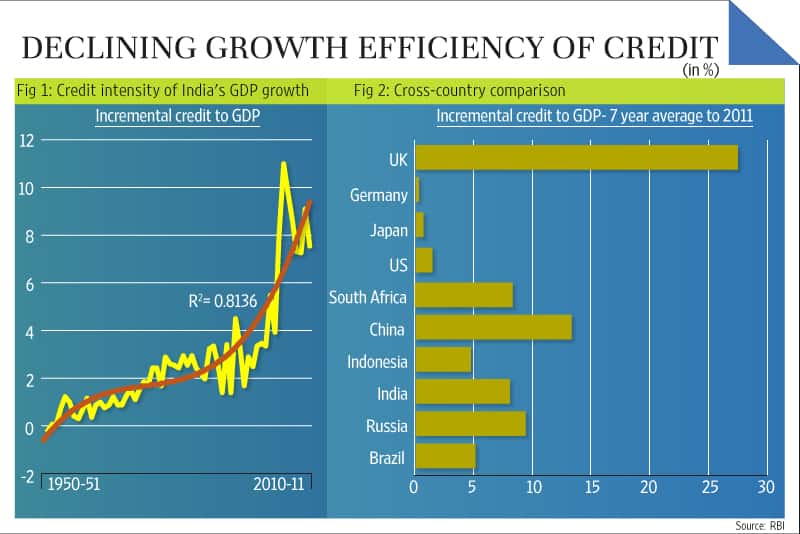 The simple reason for such varying trends in the credit intensity of growth is that there are other factors explaining growth, the major ones being demographic dividend and productivity increases. The fact that credit efficiency has dropped sharply in recent years just shows that we are increasingly doing a worse job on those fronts.

Our steadily increasing dependence on lending growth for GDP growth has important policy implications. The tight leash on credit growth that the RBI has traditionally maintained and the fact that we seldom gorged on credit meant that growth was only modestly volatile. However, this volatility is on the rise.

There are two other longer-term implications (i.e. leaving aside issues of pro-cyclicality and counter-cyclicality). One, banks will be continually under pressure to increase lending, risking an absence of debate and action on more difficult socio-economic improvements mentioned above. Two, if the services sector, the engine of economic growth in the last decade or so, is less credit-intensive as per Banerjee’s study, by elimination, industry and agriculture have become less efficient in using credit. Thus the reliance on retail credit-driven-consumption-driven growth is on the rise. This is a bit like going straight from the microprocessor to the iPhone.

The seemingly low loan-to-GDP ratio by global standards does not mean that we instigate banks towards more aggressive lending. First, if the post-reforms causality has moved to output determining credit, a miraculous reversal of the causality is fanciful. Second, the loan-to-GDP ratio is not that low, once credit to government from banks (a large number) is included, which is the way it should be. It is high time that we focus more on other factors that drive growth. But that is quite another story.

Important note—the longer time-series on India is from the Reserve Bank of India and the cross-country data for a much shorter series from International Monetary Fund. There are significant discrepancies due to issues of classification and harmonisation of period-endings. Only broad conclusions are pertinent.

Dipankar Choudhury has been a senior research analyst on financial services as well as other sectors at various investment banks, and is currently an independent consultant focusing on banks and financial services.