The growing burden of healthcare costs

Rising healthcare costs is taking a big toll on the poor

To the global traveller, India is increasingly becoming a destination of choice for medical tourism, with super-speciality hospitals in Indian cities offering medical care at rates lower than that in the developed world. But for most Indians, healthcare is becoming increasingly unaffordable, owing to rising cost of treatment in recent years.

The cost of treatment rose at a double-digit pace of growth, outpacing average inflation in both rural and urban India over the past decade, according to the recently published results of a cross-national survey on health conducted by the National Sample Survey Office (NSSO) in the first half of 2014. 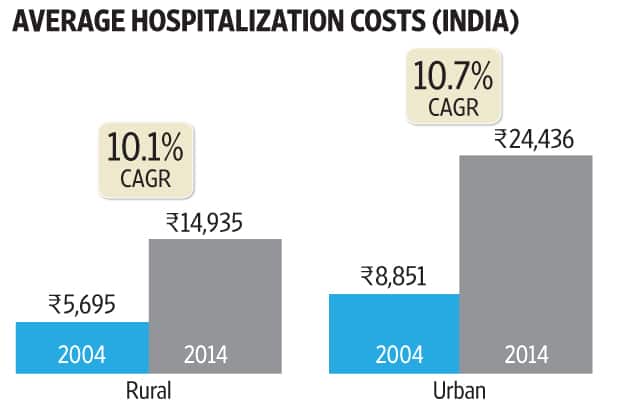 As more and more patients throng private clinics and hospitals for treatment, they have been faced with rising medical bills. The cost of treatment varies significantly across Indian states. As the charts above show, in rural India, states with high proportion of people seeking medical care in private hospitals face higher costs. In states such as Punjab, Maharashtra, Uttar Pradesh and Haryana, an overwhelming majority is turning to private hospitals for treatment.

Conversely, in states such as Odisha and Assam, rural hospitalization costs are low as most people visit government hospitals. One important caveat to keep in mind though is that poverty and lower levels of health awareness lead to lower reporting of illnesses, and lower hospitalization rates in some of these states, as the first part of this series pointed out.

In urban India too, the pattern in hospitalization costs is broadly similar, as the charts below show. Recent research on the quality of medical care in public and private hospitals in India by Jishnu Das and Alaka Holla of the World Bank, and Aakash Mohpal of the University of Michigan and Karthik Muralidharan of the University of California, San Diego, shows that although private medical practitioners may often over-charge patients (and recommend unnecessary tests), on balance they provide better quality care compared to public hospitals. “In settings with low levels of effort in the public sector, the benefits of higher diagnostic effort in the private sector may outweigh the costs of market incentives to over treat," the authors argued in a recently published National Bureau of Economic Research working paper.

The sorry state of public hospitals and health centres is forcing an increasing number of patients to turn to private medical centres. This, in turn, has raised costs and led to increasing financial stress in the absence of any insurance cover for ailments. 86% of rural Indian patients and 82% of urban Indian patients do not have access to any form of employer-provided or state-funded insurance, according to the latest NSSO survey. As a result, out-of-pocket health expenditure is higher in India than in many emerging market peers. The burden of high health costs is felt disproportionately by the poorest income class, as the chart below shows. While the average hospitalization costs for the top income quintile class roughly equals the annual consumption expenditure of this class, the average hospitalization costs are roughly double the annual expenditure of the bottom quintile. The actual difference in income shock for the poorest and the richest could actually be much higher, given that consumption expenditure tends to be under-reported for wealthier people.

According to a 2011 research paper by Soumitra Ghosh of the Tata Institute of Social Sciences, Mumbai, out-of-pocket health expenditures account for nearly one-sixth of India’s poverty burden. The high cost of healthcare also acts as a deterrent for poor people in seeking treatment, leading to delays and aggravating health problems.

The absence of adequate investments in preventive public health facilities such as sanitation and waste management in a densely populated country such as India add to the problem, as they lead to rampant spread of infectious diseases and raise health costs for the average Indian.

While the Narendra Modi government promised a big-bang transformation of India’s sanitation program after it was sworn in last year, the quantum and nature of spending on sanitation over the past year has been similar to that during the previous government, as an earlier Plain Facts column pointed out.

The lack of effective state intervention in healthcare has made India an outlier among emerging market economies when it comes to health outcomes. In 2012, the latest year for which comparable data is available, India witnessed 253 deaths per 100,000 persons due to communicable diseases alone, much higher than the global average of 178. India faces a higher disease burden than other emerging economies such as China, Indonesia, Brazil, Mexico and Sri Lanka. Even poorer neighbours such as Nepal and Bangladesh have a better record in health compared to India.

Although India has made rapid strides in lifting millions out of poverty over the past few decades, its record in health remains dismal.

This is the second part of a two-part data journalism series on India’s healthcare crisis. The first part examined the extent and spread of under-reporting illnesses across the country.