How realistic are promises of doubling farm incomes?

While announcing an increase in rural spending, finance minister Arun Jaitley also set himself a target of doubling “the income of farmers by 2022" in this year’s budget. Laudable as the ambition is, how achievable is it?

First, there is the question of nominal versus real increase in incomes. While economists might tend to value only the latter, people do value even a nominal increase in incomes. Second, given the lack of actual income data in India, there is also the question of which indicator should be taken as a measure of farmers’ income. A useful way to judge the feasibility of Jaitley’s targets can be to look at how such indicators have behaved in the past. 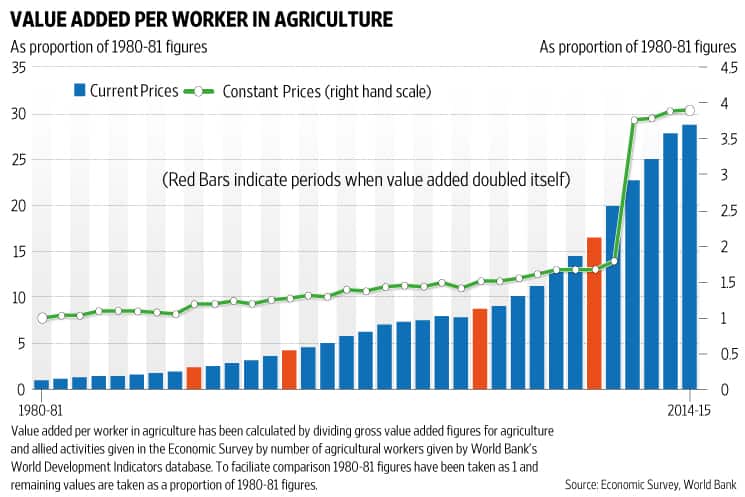 That said, an indicator such as value added per worker might not give a true picture of what is happening to farmers’ incomes. One important reason is that these figures include wages paid to agricultural labour, which does not accrue to farmers. To understand the implications of it, envisage a situation when wages rise without there being an increase in value of farm produce. Farmers would experience a decline in their incomes in such a scenario.

Are there better measures of farmers’ incomes?

The Commission on Agricultural Costs and Prices (CACP), the agency which makes recommendations for minimum support prices, releases estimates of gross and net returns to farmers over the cost of cultivation. However, an important handicap of these estimates is that they are region and crop specific. This factor makes national comparison a difficult task.

In a jointly authored paper published in the Economic and Political Weekly in 2015, agricultural economist and NITI Aayog member Ramesh Chand analysed farm incomes in India from 1983-84 to 2011-12. Chand lists another additional limit of CACP’s farm income estimates. It bypasses horticultural crops (which have a major share in India’s farm production), and does not take into account income from activities such as livestock. In terms of growth rate of real farm incomes, the period between 2004-05 and 2011-12 was the best, according to the paper’s findings. Growth rate of total farm incomes and per cultivator incomes were 5.36% and 7.29%, respectively, much higher compared to the growth in earlier periods.

Thus, it would be nothing short of a miracle for real farm income or cultivator incomes to double themselves in a gap of five years. In nominal terms, it is possible; this task was achieved during the United Progressive Alliance’s tenure. To do so between 2017 and 2022 would require a spectacular turnaround in agricultural growth rate figures. It is possible that the government is backing more on weather than its budgetary stimulus, involving an extra 27% ( ₹ 6,257 crore) for the farm sector, achieve this turnaround. This year’s economic survey talks about the possibility of El Nino year being followed by La Nina year, which brings bumper rainfall, harvests and hence growth rates. According to the survey’s statistics, average agricultural growth in a La Nina year is 8.1% as opposed to an average of 3% over 1980-81 to 2015-16.