Thanks for Visiting Mint
You seem to have an Ad Blocker on. Please turn it off in order to continue, or whitelist Mint
HOW TO TURN OFF AD BLOCKER
OR
REFRESH IF YOU ALREADY TURNED OFF THE AD BLOCKER
Home >Opinion >Online-views >Digital uncertainty

Over the next three months, the four metros are going to see an amazing scramble to achieve a technological shift with a deadline. The mandated digital switchover for cable homes is to be universal—implemented in the whole country by 2014, in the four metros by 30 June this year. The ministry of information and broadcasting (MIB) claims there will be no extensions. Come 1 July and, whoosh, the analog signal will be switched off. India is irrevocably set on the path to universal digitization. 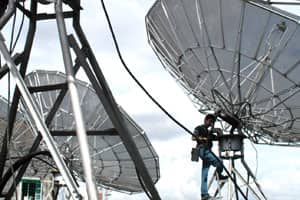 Earlier this week, ministry officials attempted to sweet-talk an assembly of cable operators and MSOs into keeping the deadline. MIB is using everything from resident welfare associations to Facebook to chivvy the LCOs along, and get consumers to demand the boxes.

It has behind it the big service providers, some of whom have joint ventures with broadcasters. There was some significance to the fact that this meet which the Federation of Indian Chambers of Commerce and Industry (Ficci) organized in Delhi between ministry officials and the service delivery crowd was chaired by Sameer Manchanda, promoter of DEN Networks Ltd, the cable TV distribution company that has a 50:50 joint venture with News Corp.’s Star TV Group. Star DEN, in turn, has a joint venture with ZeeTurner. The Sun Network has long combined broadcasting and distribution interests, but over the past few years other big broadcasters have been getting into distribution to protect their own interests. That includes direct-to-home (DTH) operations such as Dish TV India Ltd and Tata Sky Ltd.

So far the dominant media discourse on digitization has been about broadcasters needing to get pay revenue due to them because cable operators under-declare, and needing to shed the carriage fees that LCOs levy to accommodate channels in their limited bandwidth. The industry is not achieving its potential because it is hobbled by the loss of revenue on these two counts. (Cable operators counter this argument by saying that pay channels are a third or less of all channels on offer, and free-to-air channels provide television rating points, or TRPs, to the broadcasters which get them advertisement revenue.)

Digitization is expected to bring in transparency, increase distribution capacity, and give the consumer choice, better TV signals, and price regulation, since the Telecom Regulatory Authority of India will set the upper limit for what they can be charged.

But does MIB need to hustle the process along so much? TAM figures on TV homes show that with the advent of DTH, people are opting for digitization in numbers have that brought DTH to a third of all C&S homes and 28% of all TV homes. There are now 42 million digitized homes. As people are able to afford it, they opt for digitization. So we would have got there, sooner or later.

And does digitization end carriage fee demands? No, DTH operators level carriage fees, too, as does Doordarshan’s free DTH service DD Direct. There are simply too many channels around, and too many new entrants, for bandwidth to be limitless enough to accommodate them all.

What media coverage taken up with the problems of broadcasters does not address is the issue of access for those at the bottom of the viewership pyramid.

Academic papers on the digitization experience in other countries point to the fact that it threatens two things: universal access and the public service broadcaster. So what is the score there? Doordarshan’s terrestrial service will remain analog for now, the switch-off date for it is 2017. People who cannot afford cable have the option of accessing its free-to-air signals through the antennae they now use.

Cable operators have lots of poor customers too. Can they afford set-top boxes? At the Ficci interaction, MIB additional secretary Rajiv Takru made two breezy assertions in this regard: give it to them at ₹ 30 a month rental, “anybody can afford that". He also said, “Stop bothering about the consumer who does not want to pay for services." Ask the cable community and they will tell you that there is enough gold at the bottom of the pyramid to make it difficult for them to shed their low-income clientele. And renting is easier said than done. What if a migrant labourer migrates with his set-top box, asked an LCO plaintively.

Are we then looking at the making of a new digital divide, this time in television access? Or should we take heart from the government’s poverty reduction figures and assume that we’ll soon be a country where the poor can afford digitization?

Sevanti Ninan is a media critic, author and editor of the media watch website thehoot.org. She examines the larger issues related to the media in a fortnightly column.