Household savings set to fall across the world

India's savings rate might hold up owing to 'a favourable demographic outlook,' according to a paper by Chadwick C. Curtis and Nelson C. Mark

As India’s working age population increases over the next decade, it will not only increase the consumption potential of the country, but also arrest any fall in its household savings rate. A paper by Chadwick C. Curtis of the University of Richmond and Nelson C. Mark of the University of Notre Dame says India’s savings rate might hold up owing to “a favourable demographic outlook."

While the household savings rate is considered to be dependent on a host of factors ranging from income levels, interest rates, inflation to demographics, the paper, released by the National Bureau of Economic Research, focussed on the changing age structure of population to predict the likely trajectory of savings in the three largest Asian economies. Household savings are important because an economy with low savings rate is unable to fund its investment needs domestically. Such countries generally borrow from abroad to fund their investment needs and hence run a current account deficit. (CHART 2). 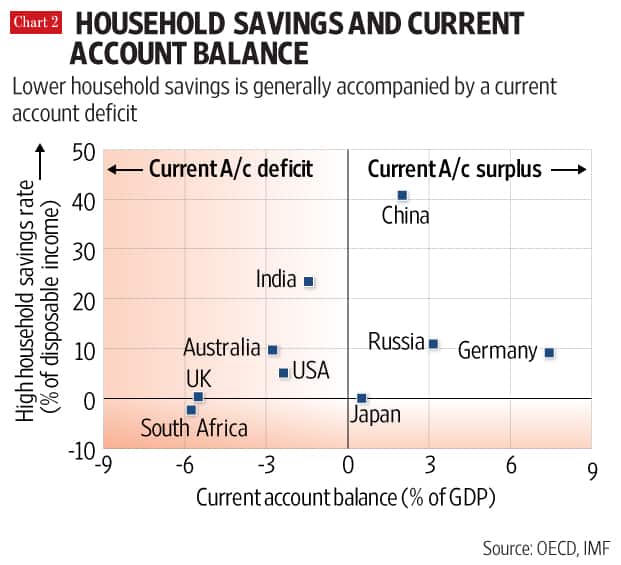 India is some kind of an exception to the above rule; India runs a current account deficit despite a relatively high household savings rate. This is because the savings of India’s corporate and government sectors are inadequate to meet the country’s investment needs. In some years, household savings made up as much as 67% of total savings. In fact, India’s government dis-saves (i.e. runs a deficit) and hence it is one of the countries in the not-so-enviable position of running a twin-deficit—on both the fiscal and the current account fronts.

Secondly, the recent trend of falling gross savings in India is another concern. India’s gross household savings rate is estimated to have decreased from around 28% of disposable income in FY2012 to around 23% in FY2014. This decline in savings likely reflects lower income growth. According to Nikhil Gupta of Nirmal Bang Institutional Equities, “although consumption growth has eased, falling savings confirm that income is growing even more slowly". Or it could mean that people are simply consuming more to maintain their standard of living at a time of high inflation.

Note also that the decline in savings rate in current account surplus economies—like China and Japan—need not necessarily be an alarming development. After all, the IMF and other global institutions have routinely called on China to increase its domestic consumption and reduce its surplus for the sake of correcting global trade imbalances.

The more curious development is the recent fall in household savings in current account deficit economies like the US and UK. According to the OECD, household savings rate in the US fell to a six-year low of 5.03% in 2013. The steady decline in US households’ savings rate is often attributed to rising costs of healthcare and also to the increasing use of student loans (which decreases the savings rate among younger households).

A decline in the already low household savings rate in US and UK runs the risk of exacerbating global imbalances (of some countries running huge current account deficits while others like China running huge surpluses). Thus, the decline in household savings could pose fresh challenges to policymakers across the globe in coming years. Of course, the effects of falling household savings can be mitigated by an increase in savings of the government and corporate sector. This is partially underway in the US.

CHART 3 shows that gross savings in the US have risen in the past few years mainly on the back of reduction in the government’s fiscal deficit, thereby offsetting the stagnant to falling household savings rate. 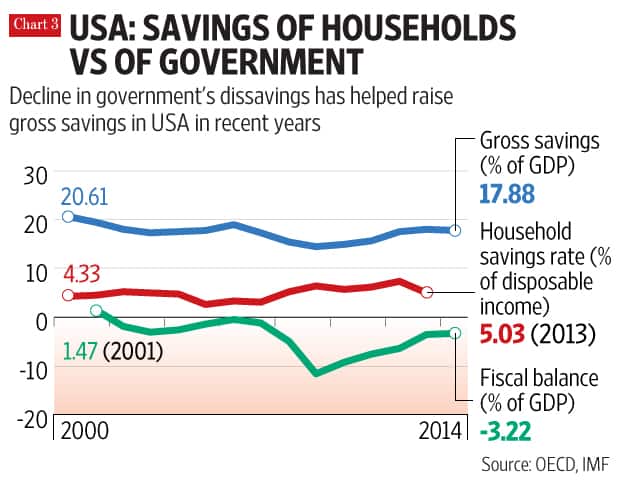