Views | The pain of commuting in Indian cities

Views | The pain of commuting in Indian cities

Harried Bangalore commuters trapped in rush-hour traffic snarls have a glimmer of hope, thanks to the new metro.

Take a look at these numbers. 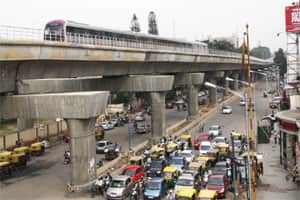 A Metro train moves along an elevated track past waiting traffic on the street below in Bangalore. Photo: Bloomberg

That’s a lot. Even New Yorkers spend less time on the road every day: 31.37 minutes one way on average, according to the US Census Bureau.

Long commutes are not only a waste of time, but also hurt productivity.

According to IBM’s Fourth Commuter Pain study, people of Delhi ranked number three in complaining about the effect of traffic on their productivity. Eighty six percent of the respondents in Beijing, 87% in Shenzhen and 70% in New Delhi said traffic was "a key inhibitor to work or school performance."

Sixty nine percent of those surveyed indicated that traffic has negatively affected their health in some way. Some 42% of respondents globally reported increased stress and 35% reported increased anger. With increasing instances of road rage cases in our country, this finding does not come as a surprise.

According to the same study, Bangalore is the most ’painful’ city in India to drive in, and the sixth most painful in the world.

It is no secret that Indian cities have grown faster than the infrastructure needed to support a decent life. The long commuting time that most white collar workers have to live with is a huge waste of human potential, besides fuel.

New Delhi has its metro. Bangalore has got a glimpse at a new public transport system. Other cities such as Mumbai are due to get new metros soon.

It’s all been excruciatingly slow, but there seems to be light at the end of the long tunnel.