A unending debate on the gross domestic product (GDP) growth numbers brought out by the Central Statistics Office (CSO) has been doing the rounds. In 2014-15, the CSO updated the methodology of calculating various macroeconomic parameters produced in the National Accounts Statistics (NAS), in sync with the System of National Accounts (SNA) (2008), which is the internationally agreed, standard set of recommendations on compiling measures of economic activity. However, there is a mismatch between recent trends in the growth rate and an array of high-frequency macroeconomic growth indicators. In light of this, I discuss the shortcomings of the deflation methodology used to calculate growth rates.

The CSO has been using a mix of the two methods. For sectors other than agriculture, and mining and quarrying, it has been using the single deflation method. This approach is debatable since the eight key components of GVA and their sub-components are not treated in a similar fashion, preventing the comparison of progress across sectors. Using a different method for each sector is prone to bias, thus affecting the ultimate numbers. Ideally the deflation of current price numbers must be done using one of the two methods, treating all the sectors in a like way. This essentially means that one should use only one method across the sectors and sub-sectors to be able to compare the trends across sectors. Based on this, I have calculated growth rates using the two methods applied to all sectors uniformly. 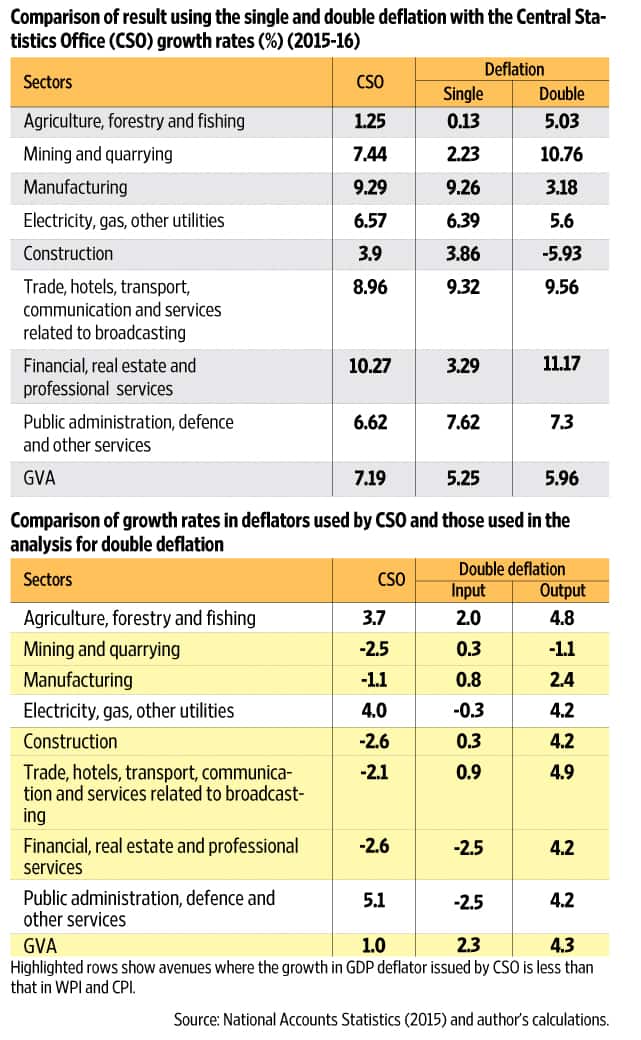 The calculations suggest that a growth rate in GVA of the order 5.25-6%, as against the 7.2% growth rate claimed by CSO. The manufacturing sector has a share of 30% and shows a growth rate of 3.18% through the double deflation method, in contrast to 9.29% issued by CSO. The high-growth figures in the sector are a stark contrast to the downward trends exhibited in the Index of Industrial Production (IIP) in 2015-16. In the construction sector, the key indicators are cement and finished steel consumption, of which a substantial proportion goes into the housing sector. While the CSO claims positive growth in the sector, the downturn in physical savings by households doesn’t support this. The financial sector showing a growth rate of above 10% hints at the lack of credibility of the nominal numbers in the sector since financial liabilities (loan advances) and financial assets (deposits) of households have been plunging in recent years.

The main reason for this huge mismatch is the choice of deflator. The CSO uses a mix of consumer price index (CPI) (industrial workers), CPI (agricultural labourers), Quantum indices (indices based on the quantity or units of goods and services independent of the monetary values) and wholesale price index (WPI) to blow up the nominal values at current prices into their constant price equivalents. My argument is that one should use a deflator approximated by the CPI as a deflator for output, and WPI for input values. While the expectation is that the GDP deflator lies between the minimum and maximum of CPI and WPI, the deflator used is well below the minimum of the two CPI and WPI; the deflators used for various sectors show year-on-year growth lower than that of WPI and CPI.

Another issue is of credibility of the nominal numbers at hand. The shift from ASI (annual survey of industries) to MCA (ministry of corporate affairs) for the production activity data of the corporate sector, wherein the MCA enables companies to e-register, puts the nominal data at risk of being overstated. It is unlikely that the MCA-21 data set used in the new GDP series is uniform, and the record of compliance with the mandated requirement to file annual returns is by no means exemplary. Likewise, there is uncertainty regarding authenticity of data on the services sector, mostly relating to the household component of the financial sector where household savings, a key indicator, is on a downturn.

Yet another issue is the availability of data that causes inconvenience in cross-checking the numbers. The CSO comes up with data on various sectors and sub-sectors in NAS after a lag of at least one year. Besides, it uses a proxy statistic based on the previous year values for various sectors. One example of such a sector is construction where even the current price numbers are obtained through an indirect approach based on various rates, ratios, and proxy values.

A layman may not understand that when the CSO uses double deflation for primary sector and single deflation for secondary and tertiary sectors, it is putting the primary sector to a more aggressive test. This gives an impression that India is evolving with a manufacturing- and services-led growth, but that may not be the case—as is suggested by other indicators of macroeconomic health.

Thus, there is a need to revise the relevant methods and concepts, and stick to one of the deflation methods for all sectors and sub-sectors to arrive at reliable numbers, which are crucial for sound policy formulation.

Published with permission from Ideas for India , an economics and policy portal. A longer version of this article appeared here.

Jyoti Sharma is a former research analyst with the Institute of Economic Growth (IEG), New Delhi.