Following a talk by Martin Kohler, a photographer and urbanist, on his project: Urban Walks, I was determined to find a place to walk in Hyderabad. Kohler is on a quest to capture cityscapes and spaces walking from one end of a city to another in a somewhat straight line. Having walked cities like London, Istanbul, Seoul, Sao Paolo, Las Vegas, etc., he was in town to walk in Hyderabad. His walks culminate into slideshows of his photographs that allow you to, for instance, traverse London in 10 minutes.

His main observation about walking in Hyderabad was that nobody uses the footpaths to walk. Rather people walk at the fringes of the roads and the pedestrian pathways appear to have evolved into places to sell tea, goods, fruits and vegetables, furniture, plants, carpets, curtains, etc. and even to build stoves for making haleem during Ramzaan. And that where there is not commercial activity on pathways, the pathways are of differing heights, have holes dropping down into drainage systems or trash heaps making it all impossible and dangerous to use the pathways for walking.

His observations were bang on with my initial attempts at early morning walks on the streets of Banjara Hills. While traffic was minimal, the footpaths were treacherous and the focus was on avoiding injury rather than to let the mind chase after epiphanies or unclog the dammed trains of thought interrupted by yet another bit of breaking news or a tweet from trendy tracker. 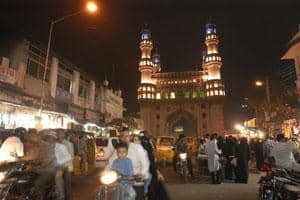 Not a great way to embark on a peaceful walk, but it put some things into perspective. Like many things in India, we have people, mainly women, who walk for miles just to fetch a pail of water and at the same time we have many urban citizens who would love to walk short distances but cannot. This is especially true for older folk who long to walk to the corner shop or chemist but cannot because they are scared of being hit or falling. My ear, nose and throat specialist, an elderly man, was lamenting about how it is impossible for him to walk anywhere in his neighbourhood and more importantly that there is no mechanism in place for complaining about the problem nor any recourse for rectifying it.

Deep at the heart of this problem is the “So what?" mindset displayed by the jerk at KBR park. Many Indians have it inbuilt in them it seems the trait of getting ahead at any cost. Beg, borrow, steal and more is evident in the daily landscape of all Indian cities. People have no qualms about getting ahead at the cost of their friend, neighbour or relative. In fact, there is joy and satisfaction when you come out at the winning end of a swindle or unfair bargain. There is no sense of the greater good. This is a deep seated mindset problem on the part of citizens.

The government on the other hand has shown that it is capable of uprooting its gargantuan glutei to get busy beautifying the city in preparation of the international biodiversity summit, COP 11. According to a Times of India article, “the CM had sanctioned ₹ 125 crore for city beautification, which includes a plan to upgrade 125km road corridor from airport to star hotels, constructing 35 new fountains, proper sanitation and remodelling of junctions among others." The article also states that the government has ordered Larsen and Toubro (L&T) to stop working on the metro rail until October 19th when COP 11 ends. The loss by L&T is estimated at ₹ 300 crore and it is stated that some of the beautification will be demolished to make way for the metro anyhow.

Citizens should be asking the government why it is so keen to impress foreigners who are here for a couple weeks by creating a false impression of the city when citizens who are paying taxes year round are not being given basic amenities. While we may not have a constitutional right to walk, it is a basic civic amenity that should be available to all citizens. Investing in proper footpaths will put the foot back in the path and allow for people to walk instead of using their vehicles for short trips. This will add up in terms of energy saved, fewer emissions and a less polluted environment. It will also serve as a long term investment in the health of citizens who can reap the benefits of walking for a few hours a week for a better and healthier lifestyle diminishing healthcare costs.