Manufacturing growth runs out of steam in July

The seasonally adjusted HSBC Purchasing Manager's Index declined to 52.9 from a reading of 55 in June, indicating that growth in the manufacturing sector is slowing down

India’s manufacturing Purchasing Managers’ Index (PMI) for July has fallen to its lowest level this year. The seasonally adjusted HSBC Purchasing Manager’s Index declined to 52.9 from a reading of 55 in June, indicating that growth in the manufacturing sector is slowing down. This PMI index, which had shown a bounce April onwards after slowing earlier in the year, has once again lost momentum. 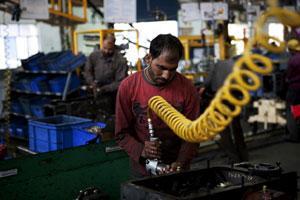 The new orders sub-index plunged 3.6 points to 54.9 in July, but the real worry was in exports, as the new export orders sub-index fell below 50 to 49.7 for the first time since October 2011. Any reading below 50 indicates contraction from the previous month. The new orders sub-index is a forward-looking indicator and could be pointing to sustained weakness, while the fall in export orders shows that demand remains sluggish globally. Also, as Mole Hau, economist at BNP Paribas, points out in a research note, “the fact that the wedge between the overall new orders and export orders narrowed a touch also suggests a domestic element to overall orders’ drop in July."

Leif Eskesen, chief economist for Association of Southeast Asian Nations at HSBC, said, “Orders decelerated faster than inventory accumulation suggesting that the more moderate expansion in output will continue in the months ahead."

The silver lining is that output price inflation has finally showed some moderation, indicating that pricing power by manufacturers is weakening. Output prices dropped to 57.5 in July from a seven month high of 59.5 in June and input prices also eased to 61.9 from 65.1 in June. However, economists said that price pressures continued to persist as these indices remained above their historical averages.

While companies blamed power outages, among other factors, for the slowdown in July, the impact of the recent power breakdown will be reflected in the PMI numbers in August. Gaurav Kapur, economist at Royal Bank of Scotland, Mumbai, said that “While the number above 50 indicates that there is expansion, since other indicators such as non-oil imports remain subdued, this may or may not reflect in the IIP (Index of Industrial Production) data. The loss of momentum between June and July in the manufacturing PMI is inline with the overall slowdown in manufacturing sector."

While the PMI data indicates more pain ahead, the Reserve Bank of India may still not cut rates in the coming months, simply because the poor monsoons may drive up prices.