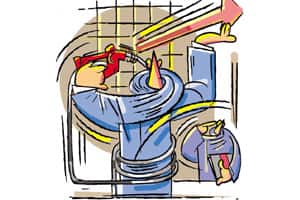 Over the past decade, the dominant firms in the petro-retailing business—public sector companies HPCL, BPCL and IOC—have sold petrol and diesel at below market prices. As a result, new entrants—from the private sector—have not only lost money invested in this segment and have been unable to compete with these public sector giants.

PNGRB has argued that the anti-competitive outcomes have emerged as a result of the pricing policy inflicted on the public sector units by the government. Further, these policies have not led to any economic benefit for the companies.

While this argument may seem plausible—after all, the government is the owner of these oil marketing companies —in reality, it holds no water. The top management of these companies have been rather supine in complying with the government–inflicted pricing policy even though it has injured them—the shortfall in price realization has been made up only partially through budgetary provisions and inflows from upstream companies ONGC and Oil India Ltd.

A sovereign fiat would have left less room for the kind of prevailing informal engagements between the government and the oil marketing companies that have ensued over the last decade. This has given the government the upper hand in perpetuating a subsidized pricing system. The prevailing informality has meant fewer price revisions, and even those, provoked only by a financial crisis at the oil companies’ end. A formal system would have lowered the losses suffered by the private companies and hastened the pace of price reforms.

The oil regulator has failed to take note of this “walkover". Rather than sending a strong message that this conduct is unacceptable—that the chief executives of these companies must put up a strong fight and not succumb to the flawed pricing regime—the regulator has implicitly supported their, and the government’s actions.

Government or oil companies: who is to be blamed for the fuel pricing mess? Tell us at views@livemint.com