The Reserve Bank of India (RBI) has set the cat among the pigeons by signalling that it is getting ready to mount an interest rate defence by tightening liquidity conditions. Markets appears shocked, analysts are getting trigger-happy to downgrade their growth forecasts and there appears to be a sense of (irrational) bewilderment at the latest move.

But Monday night’s move should not come as a real surprise when one considers the damage that a sharp rupee depreciation can unleash, the funding gap that exists on the balance of payments, the speculation that is riding on this funding gap, and therefore the outlook for the currency in the absence of any action. Indonesia and Brazil have already raised rates over the last week, and Turkey appears to be on the verge of doing so. 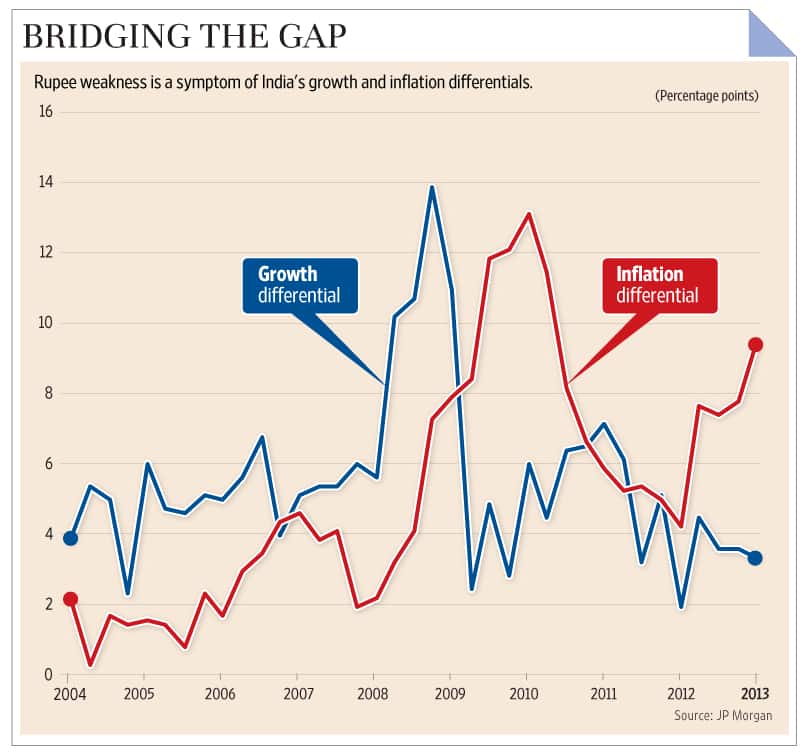 This much is known. The burning question is whether the bleeding is over. Is there more to come? Or has the move been overdone? Is the rupee stuck in a self-fulfilling spiral? Or are these fundamental imbalances playing out?

Answering this will inevitably involve an assessment of the rupee’s fair value. While there are different approaches to estimating an equilibrium exchange rate, ultimately what matters is a country’s growth (productivity) and inflation differentials vis-à-vis its trading partners. History has shown that countries that have high growth differentials vis-à-vis their trading partners experience a real appreciation of their currencies. That real appreciation can be manifested either through higher inflation or an appreciation of the nominal exchange rate. Therefore, the higher the inflation differential, the lower will be the nominal appreciation (or the greater will be the depreciation!)

In sum, countries that have relatively high growth differentials and relatively low inflation differentials vis-à-vis the rest of the world (India in the mid-2000s) should experience trend nominal appreciation. If the opposite is true (India over the last two years), the sustained bias on the nominal exchange rate is to depreciate.

Yet, assessments of fair value are medium-term concepts, and the currency can deviate from its equilibrium for months on end. On a more immediate basis, balance of payments (BoP) fundamentals will drive the rupee. The question, therefore, is in the current environment—in which the rupee has already depreciated by 11%, gold imports have seemingly abated for the moment, US treasuries have surged by 100 bps and the Fed tapering is expected soon—what will India’s BoP look like this year?

To answer this, we first need to have a view on India’s expected current account deficit (CAD). One of the presumed benefits of a floating exchange rate is that it will help equilibrate external imbalances. Rupee depreciation should be welcomed under certain circumstances, because it should boost exports (by making them cheaper), curtail imports (by making them more expensive) and thereby narrow the trade and current account deficit.

Unfortunately, this hypothesis has not played out in India. Between 2010 and 2011, the rupee depreciated almost 5%, yet the CAD surged from $46 billion to $78 billion. Part of this was undoubtedly rising commodity prices but there were several disturbing India-specific factors (discussed below). Last year’s case is even more damning. The rupee depreciated almost 12%, crude prices actually fell, and gold imports moderated in value terms. Yet, CAD increased further by $10 billion to $88 billion.

What’s going on? Why is CAD not more responsive to sharp currency movements? The problem is twofold. On the export side, our merchandise exports have become increasingly price inelastic. Exports rise when global growth pick-up but don’t respond meaningfully to depreciation of the real exchange rate. Despite the 12% rupee depreciation last year, exports actually contracted as global growth fell off. More generally, the lack of manufacturing productivity and competitiveness has meant that exports have not been able to exploit nominal and real currency depreciation in recent years.

But this is only half the story. Worryingly, policy and regulatory logjams have resulted in several rigidities on the import side. Coal imports have more than doubled over the last five years, iron ore exports have fallen off from $6 billion to virtually zero, scrap metals imports have doubled and fertilizer imports have risen 33% over the last three years. The deficit on these fronts rose from $22 billion to $38 billion between 2010-11 and 2011-12—driving 50% of CAD increase during that year. More worryingly, on some of these fronts, things are likely to get worse before they get better.

Given this, a lot of hope is being pinned on gold imports after they fell sharply in June. But let’s not count our chickens before they hatch. Gold imports are weak every single June—as nobody buys gold during the monsoon. The real test of whether gold demand has abated will be in September.

Yet, even assuming that gold imports fall by 20% over the last year, the Indian oil basket averages $105 and exports actually turn around, the FY14 CAD is expected to stay at a bloated $85 billion.

The question, therefore, is whether this can be funded in the current environment?

To answer this, we need to separate the more stable sources of funding (FDI, ECBs, trade credits, NRI deposits) from the more volatile risk-on, risk-off flows such as portfolio debt and equity flows. Worryingly, over the last three years, the more stable source of funding have only averaged $50 billion. To be sure, they rose to $62 billion last year as trade credits rose on the back of lending normalizing in the euro area.

Prima facie, attracting even last year’s quantum will not be trivial. Foreign direct investment (FDI) flows could potentially rise if the government were to increase sectoral caps but it is hard to see them surging given the weak investment climate and the looming election cycle. Furthermore, external commercial borrowings (ECBs) will be far more expensive given rising treasury yields and credit spreads. Offsetting that, perhaps, NRI deposits could get a boost from the weaker rupee. But, all told, India will do well to attract another $60-62 billion from these “stable" sources.

But this still leaves us dependent on a fresh $20-25 billion of portfolio inflows, even assuming there are no further outflows. Can that be achieved in a world marked by debt outflows in EM markets, US treasury yields at a two-year high, concerns about the stability of the rupee, no discernible signs of a growth pick-up in India, and a general election months away? Net portfolio flows for the first quarter of the fiscal year were essentially zero. So attracting $20-25 billion in the remaining three quarters will tough by any stretch of the imagination.

Something has to give

And that is the bottom line. That we have been relying on $20-25 billion of volatile portfolio flows to finance a bloated and rigid CAD in a world fuelled by monetary accommodation. At some point, the party had to end and these volatile flows would stop or reverse. And a $25 billion gaping hole in the BoP would emerge.

So how do we bridge this gap? There are only three alternatives. The first is to hope to fill the gap through other sources of funding (e.g. sovereign bonds). But to raise anything close to this quantum in the current global environment of rising interest rates and a marked distaste for EM assets appears very challenging.

The second option is for RBI to intervene aggressively in the forex market to bridge this gap and avoid more depreciation. But is the central bank prepared to intervene to the tune of $20-25 billion? Should it be spending 10% of the reserves to finance one year’s CAD?

The theoretical case for intervention rests on either the real effective exchange rate (REER) being significantly undervalued or the macroeconomic consequences from sharp depreciation being very severe. With India’s growth differentials narrowing and inflation differentials high, it’s hard to make a convincing case for the former. The case for destabilizing macro consequences is stronger—the depreciation is likely to fuel more inflation and play havoc with public and private balance sheets. But even so, should RBI be filling a $25 billion gap? After all, reserves have been accumulated through capital flows—as opposed to current account surpluses—and so there are corresponding liabilities in the economy.

A case can be made that if the time that this intervention buys is used to address the structural imbalances in CAD. However, if there is little adjustment on CAD, and the global backdrop does not change, expending a sizeable fraction of reserves would make the economy even more vulnerable to BoP pressures later.

There is a third way to bridge the gap: by further tightening fiscal and monetary policy to squeeze growth and thereby choke the current account deficit. In markets where fixed income flows are material, raising rates also makes local currency debt assets more attractive. This is the classic interest rate defence, and one practised by Indonesia and Brazil over the last 96 hours. And that is one RBI has (correctly) chosen to go down through its measures on Monday night. But will it hold its nerve even if there is collateral damage to growth in the process? Will this be politically acceptable in an election year?

None of these options appear very palatable. And that explains the rupee’s problem. That, without any of these options being taken to their logical conclusion, the exchange rate would need to bear the brunt of the adjustment. No wonder then that no level of the rupee appears sacrosanct any more. Because, given the low price elasticity of India’s current account deficit, nobody is quite sure of the extent the rupee will need to weaken to bridge a $25 billion gap. And given this lack of anchor, the climate is ripe for self-fulfilling spirals.