Learnt in Godhra, forgotten in Jaipur

Learnt in Godhra, forgotten in Jaipur

This month is the 10th anniversary of the incident at Godhra and the events in Gujarat that followed. When the violence began, it was said that the media had made the violence worse. Often this was by its innocence and sometimes by its malice.

Was this true? The Editors Guild of India sent a team to investigate. Dileep Padgaonkar, B.G. Verghese and I were the three men on this team. We visited Ahmedabad, Gandhinagar, Vadodara, Anand and Godhra. We went in March. The smell of roasted flesh had not yet gone when we entered the burnt Sabarmati Express compartment.

It had been detached from the train and kept just off the platform at the station in Godhra. The bodies had been sent onward by train where at every station they stopped, passers-by gawked and were angered. The Vishva Hindu Parishad called for a bandh. The slaughter began the next morning. 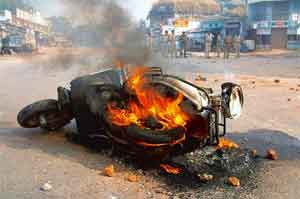 Mob mentality: A scooter is set on fire in Ahmedabad in November 2003. Photo: AFP

The critical learning was that freedom of speech in India must be regulated. To illustrate why, let’s look at our meeting with the owner of Gujarat’s second largest newspaper Sandesh, Falgunbhai Patel. Here is what he told us for the record: “Hindus were not temperamentally prone to starting riots. Gujarat had known worse disturbances (for example in 1969). But this time Hindu anger ‘irrespective of class’ was inflamed by the burning of innocent women and children at Godhra. Even Hindu women felt ‘theek hai, salon ko maro (it’s right to fix them)’.

“The English media had sided ‘out and out’ with the Muslims and the Gujarati papers were, by and large, pro-Hindu."

This is the approach of someone who owns and runs a newspaper read by 3.2 million people. Sandesh led with a report that the breasts of women had been sliced out in Godhra. The government said this wasn’t true, but Sandesh had a policy of not publishing retractions. Such stories became truth for its readers.

This was the sort of journalism that the Gujarati papers were doing.

When in Anand, I noticed the front page of a newspaper called Madhyantar. I read out its headlines to Padgaonkar and Verghese. One read: “Musalmanon-e puravo aapvo padshe ke te kharekhar Hindustani chhe (Muslims must prove that they are true Indians)."

How were they supposed to do this? That the paper did not say.

We met the collectors administering Gujarat’s districts. Many of them good and decent men and women trying to put out the fire. Some were in their 30s and in over their heads. Time and again they told us that the media was doing damage. That information put out during an episode of violence usually caused more violence. A blackout was best, and they tried to get the cable channels off air.

A principled argument on free speech would find fault with this, true. But having seen what free speech does in India, I take their side.

Article 19 (1)(a) of our Constitution guaranteed free speech to Indians on 26 January 1950. Fifteen months later, Nehru backed down from this guarantee and imposed restrictions.

Half a dozen laws restrict freedom of speech in India. These have to do with provoking religious violence, promoting enmity, insulting a religion and wounding religious feelings. But these laws aren’t new.

Our laws curbing free speech were drafted in 1837. When he was only 33, Thomas Macaulay began producing the Indian Penal Code. It has continued in more or less the same form for 175 years. It shows what a remarkably unchanging culture we are despite living amid the trappings of modernity. The code, a colonial set of laws, remains in force in free India. This is because an Englishman accurately assessed us, and predicted our behaviour and our reaction to external stimulus. This makes Macaulay a very great man. He could tell with confidence in 1837 how Gujaratis would go bestial in 2002. The Constitution made great and universal promises, but then succumbed to the reality of India’s communal violence.

The words “communal violence" are misleading, because they indicate a skirmish between equal communities. Violence by civil society in India is one-sided. The Muslims of Gujarat and the Sikhs of Delhi were recipients. The Hindus dished it out. The second aspect is that the participants are usually known to those they kill, maim and rape. The two most violently communalized cities of India are Ahmedabad and Vadodara. In both, it is neighbourhoods that go to war, with outsiders in supporting roles.

On a later visit to Ahmedabad (a depressing, segregated and oppressively vegetarian city), I was driven through its upper-class neighbourhoods. Here the homes and offices of Muslims had been neatly picked out and burnt. Muslim colonies, what Gujaratis call societies, still had their entrances barricaded as forts. The compound walls had been raised and the gates were blocked, reinforced with metal, wood, whatever was at hand to protect them from their neighbours.

The third aspect of the Indian riot is that the state steps aside and lets the aggrieved party avenge itself.

A few weeks later, at a session hosted by Gujarat’s finest scholar of Islam, Asghar Ali Engineer, we tried to make sense of this. The former IAS officer, Harsh Mander, said the British system of administration and policing was so designed that the state could bring its wild citizenry to heel inside two days. That this had not happened in Ahmedabad and Vadodara showed the intention of the state.

When vengeance is taken, there is a swift return to neighbourhood normalcy and the hatred vanishes. Where did it go? I found this disturbing because I could not understand it, and still don’t.

Vadodara’s physics professor J. S. Bandukwala, whose house was vandalized, observed something about the 2002 violence. There is still an absence of remorse and absolutely no regret among Gujaratis.

No truth and reconciliation commission for Gujaratis, or the barbarians of Delhi who cut down 3,000 Sikhs.

When confronted with their behaviour against Gujarati Muslims, the snarling response of Gujarati Hindus, and I include my friends and family in this, is, “Ae loko-e sharu karyun (They started it)."

One cannot argue against this because chronologically it is true. The use of “they" convicts all Muslims for an incident in which some individuals participated.

It is difficult to explain to Indians the wrongness of collective punishment. This is because our identity is collective, and so is our behaviour. The understanding that this is wrong comes mainly to those who speak English. Individuals are more easily produced by English because it opens access to the world outside the tribe. It is able to place us outside the narrow definitions assigned to us by Gujarati and Hindi.

But for most Indians, if they started it then they must suffer for it.

This mindset is something we have to accept. The focus must be on how to limit its damage.

The damage is done by a Hindi-medium world view. Trying to fight it with English-medium tools will end in frustration. This is why a debate about free speech here has no meaning. All these things dissolve to nothing in the knowledge that a real price is extracted for this freedom.

The men who read Rushdie aloud in Jaipur and fled after lighting the fuse were neither brave nor considerate. Such deliberate mischief has consequences.