UPA is ignoring a good narrative

UPA is ignoring a good narrative

In an interview granted to the Hindustan Times, Prime Minister Manmohan Singh said, “The biggest achievements of UPA-1 were the healing touch which we managed to bring in and the focus on inclusive growth." 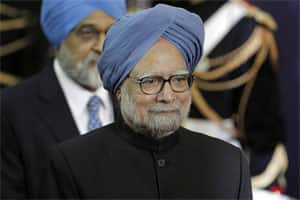 Yet, not just Singh, but no political figure in the government or in the Congress party has so far sought to own this good news. Enigmatic, indeed, because the best proof of inclusion is the expanding list of stakeholders in the country’s growth process. It is another thing to say that this is not good enough, but one can’t certainly deny the politically enviable evidence.

So why would the UPA not want to own it?

Especially since it is struggling with the legacy of near double-digit inflation in the past two years, perceptible flagging of growth, inability to generate jobs and alleged acts of corruption. And with less than 24 months to go before the next general election, the UPA is desperately seeking to alter the narrative; but for the bumbling opposition, which has succeeded in kicking a gift horse in the mouth repeatedly, the UPA story would have unravelled sooner.

By proving that inclusion is working, albeit slowly and not uniformly, the UPA will be able to stave off the worst of its critics—some of whom are in the coalition.

Undoubtedly, it will give the UPA’s leadership the much needed firepower to push through a politically tough reform agenda.

Just look at what the two rounds of census numbers reveal.

Then, in June, the census commissioner released the same data for the demography of SCs and STs.

With the exception of some variations across regions, like in the case of national houselisting data, SCs and STs demonstrated a visible improvement in their material well-being, especially in terms of their access to telecommunication and banking services—two key parameters to measure inclusion, or the effort to integrate the underdeveloped and underprivileged into the country’s economic mainstream.

To be sure, material improvement in life does not mean that the poverty problem has been fixed. In the case of telecom, it is an outcome of technology and pricing that are bringing in new customers from the lower income strata; in the case of banking, the government has been pushing for financial inclusion.

Narendra Jadhav, a member of the Planning Commission and author of Untouchables, in an interview to Mint for the houselisting report, had candidly suggested: “There is much greater transformation taking place than what we care to admit," before adding, “The broad-basing of the benefits of growth has given birth to new stakeholders."

One can only, therefore, surmise as to why the UPA has so far not staked claim to these numbers flowing from the census.

It could presumably be because the data is a broadsword—cuts both ways; so if it suits the government now, there may be a new set of data that may show up the government politically.

Take, for instance, the general reluctance of the UPA to draw the right inferences from the employment data generated by the 66th round of the survey conducted by the National Sample Survey Office (NSSO).

It showed that between 2004-05 and 2009-10, when India’s economic growth was at a peak, fewer than two million jobs were added—compared with the 55 million, aged between 15-59 years, who joined the workforce.

The first response was to discredit the assessment and, later, the data.

Regardless, the UPA’s actions are surprising.

Alternatively, it may just be yet another instance of inertia in government.

As a cynical colleague quipped, “You give far too much credit; you think there is some serious analysis being undertaken in the government. None of this must be happening; it is pure neglect."