Kaushik Basu as an adviser

Kaushik Basu as an adviser

The appointment of Kaushik Basu as India’s new chief economic adviser (CEA) should be a matter of satisfaction. He is an accomplished game theorist who knows a thing or two about human nature. For a CEA in India today, that counts more, much more, than knowledge of macroeconomics. Government advisers think their advice is good and their masters should accept it. Mostly it is ignored. Basu does not suffer such illusions.

A great deal of his recent work has focused on not treating the government as a kind of black box where advice is put in and good outcomes are the result. There is no better place to begin understanding the problems of advising government than his paper “On Misunderstanding Government: An Analysis of the Art of Policy Advice" (Economics and Politics, volume 9, November 1997). 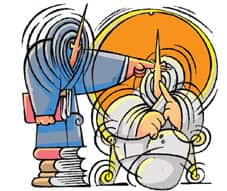 What is his conclusion?

Players in the government, ministers and civil servants, have their own preferences that may be at odds with the advice tendered by advisers. That is common knowledge (in general and in the game theoretic sense as well). The task of an adviser is to understand those preferences and then give advice that will work. In other words, there is no point in treating the government as an “exogenous" entity. Only “endogenizing" it will work. That’s where his problems will begin.

Much of our political class believes that solving a problem— may it be that of rural poverty, foreign exchange management or combating corruption, to give a few examples—just requires minting new laws. A concrete example is in order here. Take the National Rural Employment Guarantee Scheme. It works on the basis of a law, the National Rural Employment Guarantee Act (NREGA). There are specified officials who run the scheme. Any poor citizen demanding work just has to ask for it from these officials and, lo and behold, he will get work. That has not happened because the preferences of the officials concerned and the citizen demanding work are misaligned. The official wants to pocket some (usually all) of the money meant for the worker. NREGA is, as Basu would put it, nothing more than ink spilled on a piece of paper.

What is his task, then? To nudge our politicians from choosing the wrong kind of Nash equilibria. This, as in other problems of equilibrium selection, is a tough thing to do. It would be a good idea for him to revisit his paper. But it is only fair to forewarn him: The games he describes there have already been analysed by our wily politicians (they’re past masters in the art of backward induction). It would be interesting to see what he has to say.

Is advising government a futile task? Tell us at views@livemint.com