It has been a year since Prime Minister Narendra Modi surprised the country with the demonetisation announcement. Numerous commentators had criticized the move at the time for a variety of reasons, the most prominent among these being: (a) demonetisation was the wrong instrument for the intended objective of eliminating black money from the Indian economy; (b) the economy would suffer a severe adverse shock as a result of the draining of 86% of the currency from the system.

At that time, much of the criticism was on conceptual grounds, bearing in mind the importance of cash in the Indian economy. As time has passed since the withdrawal of currency from the economy, evaluation of the move is no more based on only a theoretical understanding of the economy; this is now being supplemented by hard data. Much of the recent analyses have validated the fears that had been expressed in the immediate aftermath of demonetisation. Quarter 1 (FY2017-18) growth rate has slumped while the Reserve Bank of India Annual Report (2016-17) states that, belying most expectations, all extinguished currency notes have been returned to the banks.

Jagdish Bhagwati, Vivek Dehejia and Pravin Krishna have been at pains to point out that demonetisation had some beneficial effects on the Indian economy (goo.gl/Z619ud). Referring to the apparent boost to digital banking and digital transactions, they write: “We would note that while this was not the original intended goal of demonetisation, it may yet prove the most important long-lasting benefit". Should such serendipitous benefits be employed to buttress support for a policy? Also, if unintended benefits are to be claimed as positives for demonetisation, then unintended costs (e.g. productive time lost in queues outside banks) should also be included on the negative side. As Shruti Rajgopalan and Lawrence White point out, Bhagwati et al do not carry out a cost-benefit analysis of demonetisation (goo.gl/LwqUE9). In fact, they carry out a simplistic benefit analysis of it.

It has been pointed out that demonetisation has resulted in the extinguishing of jobs, especially in the informal sector. The Centre for Monitoring Indian Economy has estimated that 1.5 million jobs were lost during the January-April period (goo.gl/kCQXBy). Alongside this loss of jobs, there has been a decline in the labour force participation rate (LPR). Figure 1 shows the trends in total (all India) unemployment rate (UR) and total LPR. 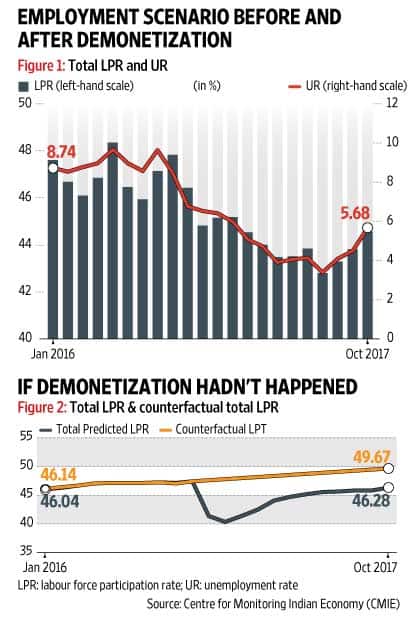 The reported job losses are not reflected in the UR but the declining LPR shows that persons are dropping out of the labour force. However, the UR and the LPR have both been increasing over August-October. Declining LPR was a phenomenon that was witnessed in the US also during the recent recession: the dismal jobs situation led many to drop out of the labour force, i.e. they stopped searching for jobs (goo.gl/TThnCE).

It has often been stated that India has a young population; approximately half the population is under the age of 26. It seems inconceivable that LPR can show a declining trend unless something dramatically unusual is happening in the Indian economy.

For the US, president of the Federal Reserve Bank of St Louis, James Bullard, put forward two reasons for the declining LPR (goo.gl/yjvshx): (a) The “demographics" view, which states that the changes in the rate are a reflection of changes in the demographics of the labour force; (b) The “bad omen" view, which says that the declines in the LPR rate are due to people leaving the labour force because of the poor state of the economy

Bullard comes to the conclusion that the demographics view best explains the declining LPR in the US. However, India’s demographic profile is completely different from that of the US. Consequently, the only explanation that holds some credibility is the “bad omen" view. The state of the economy, already fragile before the shock of demonetisation, nosedived after November 2016.

First, I carry out a simple exercise by estimating a regression of total LPR on a binary variable representing demonetisation, which essentially calculates average LPR before and after demonetisation. The pre-demonetisation average LPR was found to be 47% which fell to 44% in the post-demonetisation period, a sharp (statistically significant) fall of 3 percentage points.

I extend the above analysis by linking LPR to the amount of currency with the public (CURR) which in turn was affected by demonetisation. In the language of econometrics, I endogenize CURR and use demonetisation (which I believe to be an exogenous, unanticipated event) as an instrument (my blog gives details: goo.gl/pj5NNt). In Figure 2, I chart out the estimated path of LPR and the path that LPR would have taken if demonetisation had not taken place.

The grey line shows what did happen in the Indian economy with total LPR collapsing after November 2016. In contrast, the orange counterfactual line shows the path LPR would have taken had demonetisation not taken place. The contrast between the two lines clearly shows that demonetisation was responsible for the sudden fall in total LPR.

The decline in the LPR should be a matter of deep concern for the Indian economy. Persons may drop out of the labour force due to discouragement, the inability to find a job. In the meantime, they may take up part-time jobs to make ends meet or may be compelled to start a small business (“forced entrepreneurship") as a desperate move for their very survival. A remedy for this dismal state of affairs will not be forthcoming until the government recognizes the reasons behind this phenomenon. Unfortunately, there seems to be little hope of that with the government and its ministers continuing to aggressively defend demonetisation and denying that the economy is in deep trouble.

Ajit Karnik is professor of economics at Middlesex University Dubai.