What’s the colour of Mumbai’s revolution?

Whether or not Mumbai’s candlelight vigilantes will succeed in triggering a Colour Revolution type of movement or not is yet to be seen. 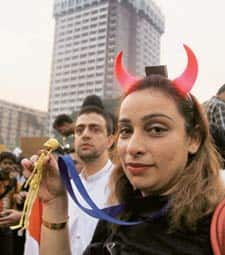 The previous year, in Georgia’s Rose Revolution, a movement that was, once again, a response to corruption and political stagnation, citizens played a crucial role in changing their leadership. Incidentally, there, too, the protest movement was called Kmara or Enough, a word that is being used frequently enough on television and in Mumbai.

If Mumbaiites are really serious about kick-starting a citizen’s movement that means something, maybe they should stop demanding we bomb Pakistan/embrace dictators and, instead, read up on the civic movements in Eastern Europe in the last decade or so. Or they could just brush up on the tactics of that original Indian non-violent gent who inspired South Africa’s anti-apartheid movement. Mohandas Gandhi taught us everything we need to know about how to power a civic movement for liberation.

And if we don’t have time to read international history and ruminate and if, at the end of the day, we go back to newspapers that as a policy ensure we read only frothy, good news on the front page, we should at least make sure our children turn out different.

We should ensure they don’t grow up to be apathetic, uninvolved citizens like us. That they understand what it takes to live in India. And for that, they must have a political view that only you, as parents, can nurture. It’s not going to be easy.

Of course, if we want our children to believe that India is a country worth living in, we will probably have to make some lifestyle changes ourselves.

Like not participating in this country’s underground economy, i.e., cash transactions.

Like not bribing our way out of every situation.

Like not rolling down the windows of our cars to throw out the trash.

Like getting involved in civic issues in our neighbourhood, getting to know our local councillor and putting pressure on him to fix things that need fixing.

Like understanding the Right to Information Act and learning to use it.

Like promoting real-life heroes who come from spheres beyond films and cricket. Men such as Raj Arole, for example, who is featured in the latest issue of National Geographic magazine. The Aroles, both doctors, came back to India after studying public health in the US to work with the rural poor.

And, of course, all this can work only if we share a deep emotional connect with our cities. A member of an Istanbul rock band interviewed in director Fatih Akin’s Crossing the Bridge—The Sound of Istanbul sings it best, “This city sucks our blood, it’s worth dying for."