While compositional shifts in resource transfers are indeed desirable in core services, scheme-specific transfers, together with independent monitoring, are equally necessary

The Constitution clearly defines the role and activities of central and state governments by specifically enumerating them in the central list, state list and concurrent list. While there is no ambiguity with regard to the central list and state list, activities falling under the concurrent list are subject to the overlapping jurisdiction of the Union and states. States are primarily responsible for maintaining law and order, defining and ensuring property rights and providing key social and economic services covering health, education, employment and economic infrastructure, etc. which often involve large public expenditure. Most of the services and activities which have an interaction with people are in the domain of a state. In contrast, the powers to raise resources are largely biased in favour of the Union government.

If we consider developmental expenditure (the expenditure on social and economic services), the share of states together has averaged around 66% during the last 25 years and, except for some years, this share has generally been stable. The increase in the share of expenditure in the last two years is largely due to an accounting adjustment as the expenditure incurred on schemes where funds were earlier transferred directly to implementing agencies was included in the state budget and accounts. 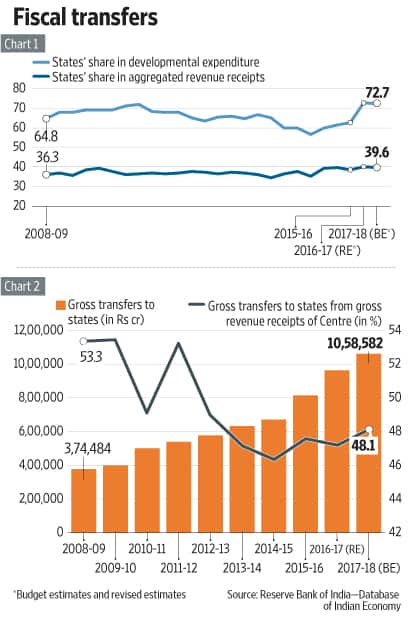 In contrast, the share of the states in aggregate revenue receipts (excluding the tax devolution and non-tax transfers from the centre) averaged only 37% during the same period (Chart 1).

This asymmetry in resources has been to an extent deliberate and designed. Recognizing the higher resource requirements of the states relative to their resource-raising powers, the Constitution, therefore, has mandated transfer of funds to the state governments through statutory and other transfers in the form of tax devolution and allocation of resources for specified schemes/programmes. The rationale of our cooperative fiscal federalism has been the belief that the multilevel governments, through cooperation, competition and collaboration among themselves, can have optimal solutions to these issues of resource availability and needs within the constitutionally-mandated framework of a set of well-defined rules.

Resource transfers from the centre to states have two dimensions. In the first instance, they relate to the vertical transfer from the centre to states, or the size of the divisible pool, and in the second, it is horizontal transfer, or transfers across states. Successive finance commissions have looked at both these aspects and tried to have the vertical share of states at an appropriate level and ensure that the allocations to individual states provide some kind of convergence in delivery of basic services across states. The commissions have recognized that as the services and programmes which are at the core of a more equitable social order are with states, realignment of resources in their favour may be necessary.

The report of the 14th Finance Commission, which raised the share of states in the centre’s tax receipts by 10 percentage points to 42%, was in a way giving expression to these expectations. But the overall transfer of resources, taking together the transfers from the finance commission and other transfers for schemes and programmes, as a proportion of the centre’s gross revenue receipts, did not change, only the modes of transfer did. (Chart 2).

The centre has already effected a change in 2013-14 in its release of funds to states for centrally-sponsored schemes (CSS). Nearly 20% of the total transfer of funds during 2007-14, which were transferred directly to the implementing agencies, began to be re-routed through the treasury route. Though there have been some delays, this mode is robust, transparent, has a well-defined system of tracking and cash management, and is duly validated by the accountant general and audited by the comptroller and auditor general (CAG). This, together with the compositional shift in finance commission transfers from grants to tax devolution, did not result in any additional fiscal burden to the centre and did not result in any augmentation of resources for states. There was, in effect, a decline in the share of states from around 53% in 2011-12 to an average of 49%. The commission considered this compositional shift desirable since it is formula-based and conducive to sound fiscal federalism, though it did not deny it would need to be supplemented by grants-in-aid to fiscally-stressed states in a fair manner.

In its recommendations for distribution of resources among states, it assigned a 50% weight to income distance, taking cognizance of the capability of states to raise resources on their own. The commission’s rationale in vertical distribution was affordability for the centre; while the implicit assumption in the horizontal distribution was a kind of convergence or a move towards some kind of uniformity in delivery of core services across states.

As the 2017 Economic Survey points out, there is strong evidence of convergence on two health indicators—life expectancy and infant mortality rates—across states, but in income and consumption, there is evidence of an increasing divergence. This divergence could be due to a variety of reasons, but the importance of education, skill development, availability of infrastructure and civic facilities continue to be the contributing factors.

Unequal access and poor delivery of services, including their quality across states, may partly be contributing to this lack of convergence in income and consumption parameters. This raises the issue that while a compositional shift in resource transfers is indeed desirable in core services, scheme-specific transfers, together with independent monitoring, are equally necessary. On the ability of the centre to afford resource transfers to states, opinions will differ, and that may be left for the consideration of the next finance commission.