India has one of the lowest per capita daily supply of calories, protein and fat, according to OECD, a club of rich nations

In December last year, the government promised a 40% increase in the supply of subsidized grain to expand coverage of the food security law. Whether the target of higher food supply coverage will be accomplished is hard to tell, but data show how the supply of nutritious food remains a challenge.

India has one of the lowest per capita daily supply of calories, protein and fat, according to the Organisation for Economic Co-operation and Development (OECD), a club of rich nations. This is lower than even South Africa, Brazil and Indonesia. Per capita amount of food available is typically calculated as production plus imports minus exports divided by the population. 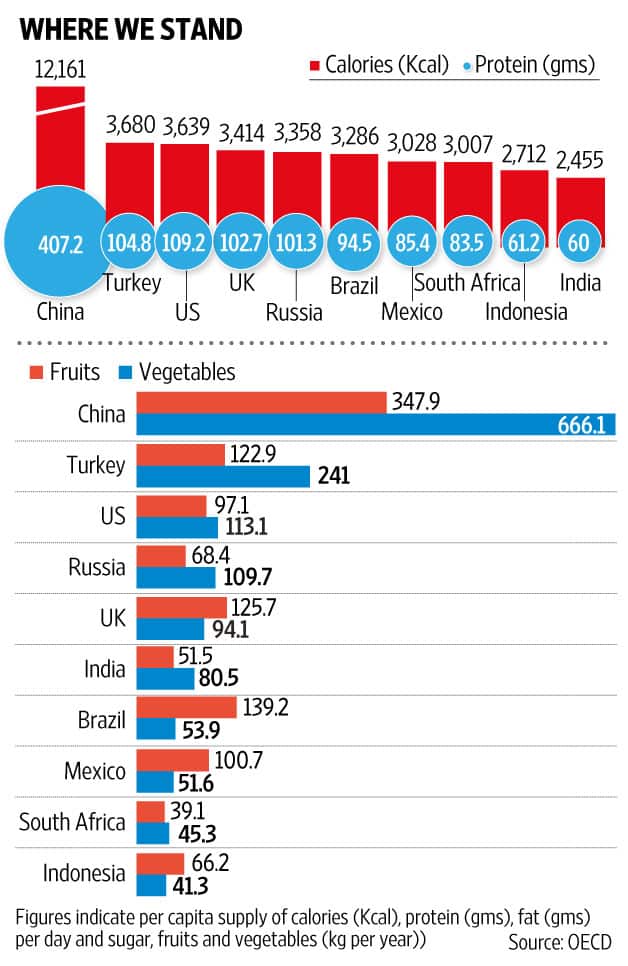 In India, poor per capita availability is largely a reflection of high poverty, which makes it difficult for a large fraction of the population to access nutritious food. In an October report, the World Bank said India has been the biggest contributor to poverty reduction between 2008 and 2011, with around 140 million or so lifted out of abject poverty. Even that hasn’t been enough. with the country accounting for 30% of those living in extreme poverty in the world in 2011.

“India is a hugely demand-constrained economy. People don’t have enough money because of which per capita food supply is low despite high production. If people had enough resources, per capita food availability would have been higher and India would not have the huge buffer stocks it currently has," said Biswajit Dhar, professor at the Centre for Economic Studies and Planning School of Social Sciences at Jawaharlal Nehru University in Delhi.

When demand is low, an increase in local production need not translate into increased availability as a larger portion of the produce may be exported. In India’s case, it also depends on changes in government stocks. The Economic Survey show that net cereal production has hardly changed at 465gm per person per day from 2000 to 2013. However, per capita availability of cereals has increased from 422gm in 2000 to 468gm in 2013. However, it was largely a function of changes in government stocks. In the previous two years, availability of cereals was lower at about 410gm per person per day.

The average Indian had access to 2,455 kcal per day with protein and fat availability at 60gm and 52.1gm, respectively, according to OECD. This is far lower than the at least 3,000 kcal per day availability for OECD nations. Things have also not improved since the beginning of this century (see chart 3). Factors such as wastage of stocks are also to blame for poor availability. For instance, Food Corporation of India data show 3,000 tonnes of foodgrains were damaged in 2015-16. In 2014-15, quantity of damaged grains stood at 19,000 tonnes . Per capital food availability doesn’t reveal the whole picture. Actual consumption may be even lower depending on the magnitude of losses and wastage in a household, for instance, while cooking and preparation. As data from the National Sample Survey Office show, both total calories and proteins consumed have fallen in the two decades to 2011-12. The average rural Indian consumed only 2,099 kcal per day and urbanites 2,058 kcal per day.

The average intake, according to NSSO, is higher than what is needed. India has a minimum dietary requirement of 1,760 kcal per person per day, according to the Food and Agriculture Organisation (FAO). This number is calculated as the weighted average of minimum energy requirements of different gender and age groups in the population.

However, calorie intake is also clearly a function of income, NSSO figures show. The bottom 5% of the rural population (ranked by per capita expenditure level) consumes only 1,633 kcal per person per day compared with 3,264 for the top 5%.

Poor supply of nutritious food and inadequate per capita income to access good food feeds into health issues such as disability and malnutrition.

“Whether it be poor women’s participation in the workforce or wasting and stunting in children under 5 years of age, it can all be addressed to a large extent by supply of good food," Dhar said.

While the government is making efforts to fill shortages in dietary consumption, it is long-term solutions that are truly needed. One fear among experts is that policy makers will start working towards short-term solutions.

“Providing cheap sources of energy in the form of refined cereals, sugars, oils … may lead to earlier onset of risk factors like overweight and obesity, high blood pressure, etc," said Shweta Khandelwal, associate professor at the Public Health Foundation of India, an autonomous foundation in New Delhi. While calorie and protein consumption have fallen, fat intake has increased both in urban and rural households, NSSO data show.