Looking back at an amazingly chaotic 2011, it is difficult to pick out one outstanding strain. Rather, it is easy to be swept away by the maelstrom of images and events that unfolded with such bewildering frequency globally. Yet, if one stepped back for a moment, there is a very important message that comes from what was certainly the year of globalization of protest: it is the end of status quo. 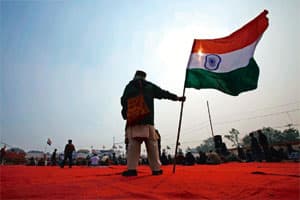 After Hazare’s flop show in Mumbai and the midnight capers last Thursday in the Rajya Sabha, it would be tempting for politicians to believe that status quo can be restored. It would, however, be a fatal mistake. This is the singular message which comes from the foment in society, witnessed not just in India but across the world. And this is a message of hope for 2012.

Change does not mean that it will necessarily be good for everybody. Most certainly though it will mean that there is nothing permanent about the list of beneficiaries any more. This reordering is unlikely to be radical, but it will have an unprecedented frequency.

This year is going to see regime change in a host of key nations. The US is already taken up with the run-up to presidential elections, due in November (Barack Obama’s election four years ago had signalled the biggest change in race relations in a country that allowed universal suffrage well after India, the largest democracy, provided for it); similarly, France is up for presidential elections; Russia is in the throes of tumult after popular protest rejected the charade being attempted by Vladimir Putin; China will usher in a new leadership in a style so unique to it; and, finally, India is due for a mini-general election with Uttar Pradesh (where Congress general secretary Rahul Gandhi has for the first time very overtly claimed ownership of his party’s campaign and thereby ownership of the outcome), Uttarakhand, Punjab, Goa and Manipur due to elect new state assemblies, starting later this month.

No matter who is elected, they, most certainly, will have to incorporate the new mantra of inclusion defined by the waves of global protest. The lexicon of governance, which has long been appropriated by the status quoists, is changing. Politicians who acknowledge this would thrive. The polity that ignores it will inevitably invite chaos that will underlie mass social unrest.

In a recent interview to Mint, Thomas Pogge, one of the foremost global philosophers and Leitner Professor of Philosophy and International Affairs at Yale University, summed this up perfectly: “People always say that the poor are poor and we have to redistribute from the rich to the poor. But, of course, the whole system is one that redistributes to the advantage of the rich; all the rules are designed such. And then when they have so much and the poor so little, they say “Oh", we have to redistribute a little to the poor. We should not allow that language to win. We should say that we do not want redistribution, we want a different distribution that assures poor people of a minimally decent share of the social product and of a genuine chance to participate proportionately in national economic growth."

In this sense, the shift to an entitlement regime in India—whether by accident or design—signals this new phenomenon.

It seeks to restore some element of parity between the beneficiaries of unprecedented economic growth and the legions that do not even possess the wherewithal to even attempt to be part of it. Those who attack it on the grounds that they are not fiscally sustainable are desperately seeking to hang on to status quo.

For this to have a fair chance, the governance parameters have to change. The short-lived popular support to Hazare (which may yet revive) was a reflection of a demand from society for a better governance—an entitlement that is enshrined, albeit ignored, in this country’s Constitution. The politicians have, surely at their own peril, focused on the messenger and not the message.

However, it is apparent that all this is changing; 2011 was the beginning. It would then be appropriate to close with the sobering reminder: “There is nothing constant in this world, excepting change."