De-stress or distress at Indian spas?

De-stress or distress at Indian spas?

If you’ve seen Never Say Never Again, the 1980s movie that marked the return of Sean Connery to the role of James Bond, then you’ll remember the sequence where Bond gets sent to a health farm. The film opens with Bond failing a training exercise and being told by the new M (Edward Fox) that he must seek a naturopathic cure (this M is a health nut). 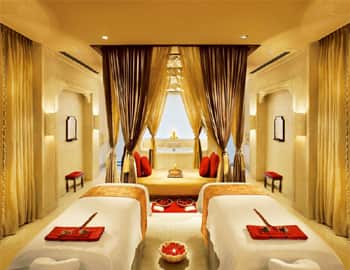 Bond is duly dispatched to a health farm where he eats the worst food imaginable (nut cutlets and the like) and is bored out of his skull. Being Bond, of course, he is well prepared for all eventualities. In a day or so, he’s up to some rumpy pumpy and his suitcase is revealed to have a false bottom which conceals champagne, foie gras, caviar and the like.

When Never Say Never Again was made, spas were essentially European operations, only a step above nursing homes and clinics. You went to one to recover your health. If, like Bond, you had become flabby and out of shape, then your diet was restricted and white-uniformed nurses pummelled your body till it acquired the required dimensions.

Indian versions of spas were much the same, only they replaced traditional medicine with ayurveda or some ethnically Indian discipline. In the 1980s, I went to the then trendy fat farm, Jindal Naturecure Institute, in Bangalore, and fled very quickly. Though Jindal had the reputation of being the haunt of the glamorous (Rekha, Dilip Kumar, etc.), I found it icky, tired of the nimbu pani diet and was alarmed by the appearance at my door each morning of an eager uniformed attendant, apparatus in hand, to give me my daily enema.

Many, many years later after Asia had got in on the act and transformed the European spa concept to something much gentler and more tranquil, I swallowed deeply and spent the vast sums required to go to Chiva- Som which usually appeared in lists of the world’s top 10 spas. I loved Thailand, liked the Thai tradition of massage, had heard that Hua Hin (where Chiva-Som is located) was beautiful and so, was convinced that I would have the time of my life.

In fact, I hated every minute of it and checked out early. I thought the accommodation was too small for the price, found the treatments too “health-farm" like and loathed what they kept describing as “Chiva-Som’s award–winning spa cuisine". As Bond had done in Never Say Never Again, I escaped the terrible meals (included in the rate so I was paying for them anyway) and explored the town of Hua Hin via the beach. The local food was so good that I pitied anyone eating at Chiva-Som.

In retrospect I suppose it wasn’t Chiva-Som’s fault — just as it wasn’t Jindal’s fault. I’m just not a health-farm sort of guy. Too many of them are too much like hospitals and as somebody who is terrified of hospitals I find that health-farms actually cause me more stress not less.

Even so, there are spas that encourage you to just relax, where the staff do not pretend to be healers and where the emphasis is on luxury rather than good health. Shortly after it first opened, I went to the Banyan Tree in Phuket and was blown away by the massages, by the quality of the experience and by its “spa cuisine" (much, much better than Chiva-Som’s).

Later, I learnt that The Oriental, the grand hotel that is to Bangkok what the Taj is to Mumbai, had started a day spa, that is to say, you got the same treatments as the spa-hotels but you could be — in effect — an outpatient. I hurried to The Oriental and was massively impressed by the sheer elegance of its spa. I was not surprised when, within a few years, nearly every Asian deluxe hotel had a spa that was, in some way, inspired by The Oriental’s trend-setting effort.

But India never seemed to get it right. Spas at Indian hotels were always a disaster. Bikki Oberoi more or less admitted this when he outsourced The Oberoi Group’s spa operations to the Banyan Tree chain. The Oberoi spas are wonderful but they are not Oberoi spas, if you see what I mean.

The Taj group counter-attacked with the much-praised Jiva brand. Sadly, I have never been a fan. Rarely have I been to a spa at a Taj hotel in India (abroad, it’s a different story: the Mauritius spa is world class) that compares with a similar spa in East Asia.

But now there are signs that India is finally getting into spa first division. ITC has just entered the spa area with Kaya Kalp, a huge spa at Agra’s The Mughal. I haven’t been there yet but I’ve heard nothing but good things about it. Last month I was startled to see that Tatler, the British magazine, had rated it as the best city spa in the whole world, an accolade that put it ahead of even The Oriental’s spa.

As much as I love the ITC chain, I hadn’t previously thought of them as being able to conquer the spa world so effortlessly so I was more than a little surprised by the accolade. I was pleased too to find other Indian hotels on the list.

Usha Kiran in Gwalior, India’s only hip palace hotel (thanks to a quirky but trendy overhaul by the young maharani) features because, though its spa “is neither mega-swanky nor hi-tech", it has “super-skilled therapists and tip-top treatments". Also on the list is Ananda in Uttarakhand about which Tatler says “the beauty of Ananda is that you don’t have to do what’s good for you."

To my eternal shame, though I’ve often been to the excellent Usha Kiran, I’ve never tried the spa. I keep making plans to go to Ananda but it never seems to work out. And as for the Mughal spa, I’d have to be crazy not to drive just 3 hours to the best city spa in the whole world — it takes longer to check in at Delhi airport.

So maybe I’ll go. Maybe the days of lusting after The Oriental spa are over. It does seem as though India’s finally entered the spa-age.