Latest data shows that while it is true that around 2.5% Indians filed returns in 2012-13, less than half of them paid any tax

People say that none can avoid death or taxes. But it seems a large number of Indians do know how to avoid taxes. The most striking revelation from data released by the income tax department is the fact that only 1% of Indians pay income tax, which is even smaller than what was previously thought.

In 2012, then finance minister P. Chidambaram had said that only 2.89% Indians filed income tax returns. However, latest data released by the tax department shows that while it is true that around 2.5% Indians filed returns in 2012-13, less than half of them paid any tax.

Even among those who paid income tax, there is a great deal of variability, with 80% of all income tax payments being made by only the top 11% of individuals (CHART 1). This means, on a national level, only 0.1%, or only 14 lakh individuals, paid 80% of the country’s individual income tax. 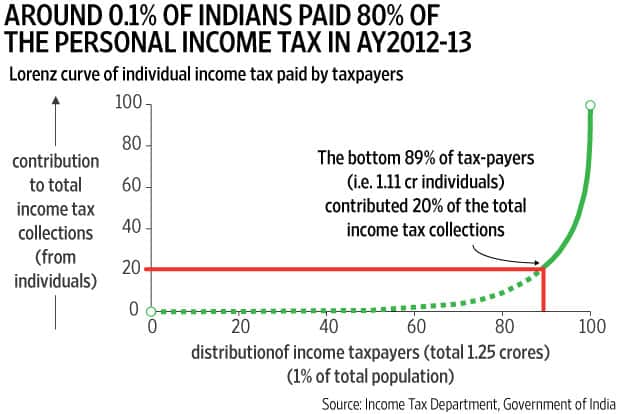 To be sure, there is a possibility that this analysis might be slightly underestimating the number of taxpayers because the data released by the department for assessment year 2012-13 captures only those returns that were filed up to 18 December 2014.

How different is India from other countries?

The first thing to note is that the proportion of population that pays income tax is much higher in three other countries that have been taken for comparison—the US, the UK and South Africa. In the US, around 45% of residents pay income tax, while in South Africa it is around 10%—way more than India’s tax base of around 1-1.5%. The shape of the curve of cumulative tax contributions is much more skewed in case of India, showing that only a very tiny fraction of the population contributes to almost all of India’s income tax collections.

Why is this important?

When the government is unable to tax people, it starts to tax goods and services and resorts to levying additional cess on such taxes whenever it needs revenue. That has been the case with India—an extremely high reliance on indirect taxes. This category of taxes refer to taxes like the VAT, sales tax, excise duty, customs duty and any cess over such taxes. 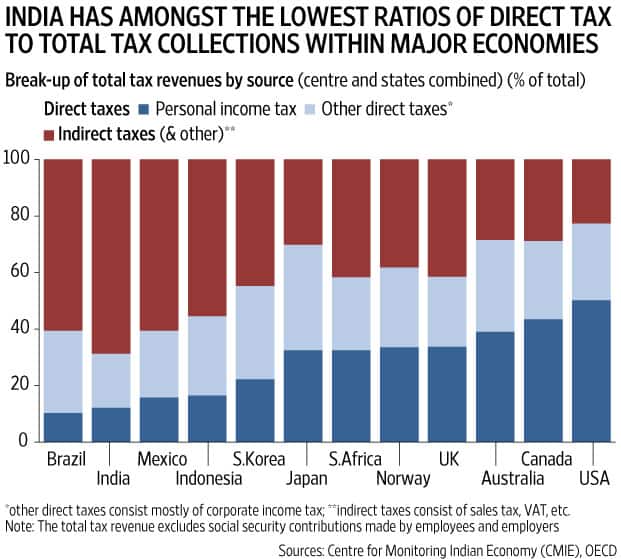 Indirect taxes are regressive in nature because they do not differentiate between the rich and poor and the poor generally end up paying a greater proportion of their income in indirect taxes.