Where the mind is without cliches

Patriotic songs, political speeches that have been recycled to death, and the relevance of Sahir Ludhianvi

On the morning of this Independence Day, I stood on the balcony of my apartment and watched the flag-hoisting ceremony our residents’ association had organized on the lawns. The 30-40-strong crowd milling around could be classified into two distinct groups: retired people and pre-teen children. The children waved flags and ran around and ate the snacks on offer. The retired sat on benches and chatted. Old patriotic songs played on the sound system. 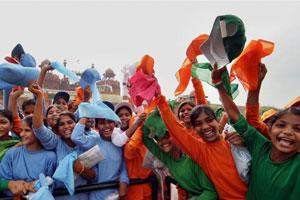 I wouldn’t even think of attempting to translate Sahir Ludhianvi’s searing lyrics. But I suppose it’s not difficult to get the drift. Guru Dutt, the impoverished poet, stumbles down alleys lined with whore-houses and asks where all those eminences are who are proud of India.

In a matter of a few years, we as a nation have plunged into a well of despair. Just five years ago, I remember Raghuram Rajan, the newly appointed Chief Economic Advisor to the government, telling me that what India should be careful about was “overconfidence"—that every Indian was going around thinking he was a “big swinging dick", a term that originated among Wall Street investment bankers as they whoopied their way to rack and ruin. Almost a century seems to have passed since then. Forget about “superpower" rhetoric, our politicians don’t even utter that hackneyed phrase from the Indira Gandhi days: of taking “our rightful place in the comity of nations". The one positive thing about hard times seems to be that some pointless clichés get junked. Now we have our Prime Minister talking about unleashing “the animal spirits" in our economy (His Madam Tussauds demeanour doesn’t go with that phrase, but never mind).

Unfortunately, “nation-building" seems to have come back into favour, the Prime Minister used the phrase in his Red Fort speech (How long do we keep building? We are 65 years old!). And I fear we will never see the exit of “dastardly act" from our political vocabulary. I think that has reached some sort of Pavlovian reflex level, whenever there is an act of terrorism.

The good news is that “unity and integrity of the nation", “the cancer of corruption", and “together, we will meet the challenges of the future" seem to have been mothballed. On this Independence Day, let us thank our politicians for these small mercies. (Did some channel show the film Gandhi this year too? I haven’t checked.) Where the mind is without fear and meaningless clichés disappear slowly, into that heaven of freedom, my Father, let my country awake. While we continue that search Guru Dutt and Sahir spoke about.