A picture on our TV screen, which has now become all too familiar to us, is that of some suspect being escorted to the court room by the police. He is handcuffed, occasionally prodded to move forward and led into a waiting van. He is surrounded by a posse of journalists and photographers. They jostle and push to get close to the suspect. Some want to ask questions bluntly: “Why did you do it?"

As this is happening, the hapless victims try to hide their faces. Some pull their shirts over their heads and some bend their head down to their chest. In the telecast, the same strip of video is played repeatedly as the report is read. 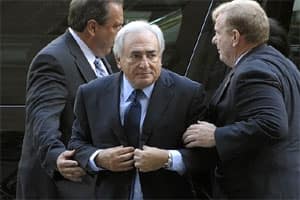 To put someone to shame for some criminal act is not anything new in history. Some of Shakespeare’s characters are punished for their misdeeds by being exposed to public ridicule in a pillory or in the stocks. These are wooden frames with holes for the head, hands and feet in which the victims were locked in a public place. Not free to move, they were humiliated by passers-by who threw things at them and abused them.

When did it all begin? Some commentators believe that the first perp walk took place when Adam and Eve were expelled from Eden by a sword-bearing angel. More authentic instances on record are the transfer of condemned aristocrats taken by dump carts to the guillotine during the French Revolution, facing public scorn all the way.

Edgar Hoover, director of the Federal Bureau of Investigation, permitted the press corps to cover the perp walk done by notorious gangsters. In 1963, after the assassination of John F. Kennedy, a perp walk took an unexpected turn. As Lee Harry Oswald was being taken to the county jail, a man came out of the crowd in the basement and shot Oswald. He was identified as Jack Rubin, owner of a Dallas night club.

Rudolph Giuliani, as US attorney, used the perp walk as an instrument to tame white-collar traders of Wall Street who faced charges of financial fraud.

The perp walk became big news last year when Dominique Strauss-Kahn, International Monetary Fund director and a strong candidate for the French presidency, was arrested in New York on a charge of sexual assault of a hotel maid. The perp walk that followed shocked the French nation. Kahn was handcuffed and made to walk, distraught and exhausted, prodded by the police. In France it is illegal to publish pictures of someone in handcuffs or in other restraint, unless the person has been convicted. Critics said that such images are “brutal, violent and cruel". Mayor Michael Bloomberg told The Wall Street Journal: “I have always thought that the perk walks were outrageous." He thus modified an earlier comment he made in defence of such walks.

The discussion that followed the Strauss-Kahn case centred on two basic rights. The first is the right to privacy: here judges tended to object to operations within private homes being photographed, but did not object to those in public places. The second is the right to be presumed innocent until proved guilty or until convicted. This is grossly violated in most cases. Sometimes the walk is restaged for the benefit of those who missed the original. Judges have ruled that such cases do not enjoy protection.

Can the law in force in France be applied to proceedings in foreign countries? Here France has to accept that American judiciary works differently. Its boast is that the billionaire and the ordinary citizen get the same treatment.

Even now I find my position ambivalent in deciding which side my sympathies should lie with.