Home / Opinion / A strong rupee hurts the economy
Back
Share Via

A strong rupee hurts the economy

A more appropriate exchange rate would stimulate exports and dampen imports, just as it would help domestic manufacturing firms to be more competitive

The exchange rate of the rupee rose to Rs63.50 per US dollar last week, attaining a two-year high, while foreign exchange reserves were at a record level of $393 billion. It has led some financial analysts to predict that the rate might climb down to Rs60 per dollar by end-2017. This might be a source of joy and pride for a few. But if our object is to stimulate investment, create employment and foster growth, it is a cause for serious concern.

The exchange rate is a crucial price that determines the amount of rupees earned per dollar of exports and rupees paid per dollar of imports. Thus, it is a determinant of the price competitiveness of exports in world markets and the price competitiveness of imports in the domestic market. Similarly, it exercises an important influence on the profitability of domestic firms that produce goods which are exported, or produce goods which compete with imports. The relative profitability of domestic firms is particularly important in a large economy such as India, because most exports are goods that can be sold either in the world market or in the domestic market, while most imports are goods that can be bought either from abroad or at home. 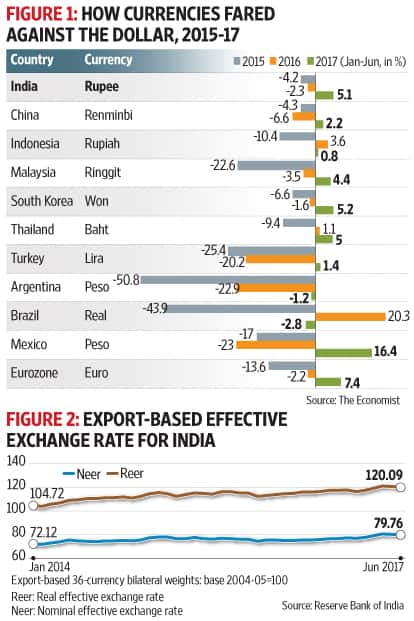 Figure 1 compares the depreciation, or appreciation, of the rupee vis-à-vis the dollar during 2015, 2016 and the first half of 2017, with that of the euro and the currencies of nine emerging economies. It shows that the rupee depreciated the least in 2015 and among the least in 2016 (less than the Chinese renminbi in both years). In 2017, almost every currency appreciated against the dollar, but the rupee rose the most (along with the Korean won).

Such a comparison of nominal exchange rates, which is by definition bilateral, is necessary but not sufficient. There are two derived concepts that are important. The nominal effective exchange rate (Neer) is an index that measures the value of a currency against a weighted average basket of currencies. The real effective exchange rate (Reer) adjusts the Neer for differences in rates of inflation at home and abroad. The Neer and Reer can be either export-based (with appropriate weights for currencies of countries that are major markets for, or competitors in, its exports) or trade-based (with appropriate weights for currencies of its important trading partners). For India, the trends in both are very similar.

Export-based effective exchange rates for India, both Neer and Reer, for every month from January 2014 to June 2017, are plotted in Figure 2. These provide a better measure of movements in the exchange rate of the rupee over time in both nominal and real terms. Over this period, the Neer index fluctuated but appreciated by 10%. In contrast, the Reer index shows a clear upward trend and appreciated by 15%. This significant appreciation of the rupee must have diminished the competitiveness of exports in world markets and enhanced the competitiveness of imports in the domestic market.

India’s export performance in the past three years provides confirmation. During the period 2011-12 to 2013-14, average annual exports were $307 billion. Total exports were $310 billion in 2014-15, $262 billion in 2015-16 and $275 billion in 2016-17. Thus, there was a stagnation followed by decline in the value of exports in current prices at market exchange rates. India’s share in world exports, around 1.65%, was just about maintained. The slow growth in world trade does impose a demand constraint on total exports from developing countries taken together. But this demand constraint is not binding for single countries such as India, particularly if their share in world exports is small. In fact, from 2014 and 2016, China and Korea managed modest increases in their large shares, while Vietnam, Thailand, Taiwan, the Philippines, and even Bangladesh, managed to increase their small shares in world exports.

Clearly, given this comparison with other Asian countries, it would be misleading to blame the world economy for India’s dismal export performance. Some part of the explanation lies in domestic economic factors such as infrastructure or quality but these have been problems for a long time. The exchange rate of the rupee has been the main culprit in recent years. Software exports, which have continued to grow—from $98 billion in 2014-15 to $108 billion in 2015-16 and $117 billion in 2016-17—appear to be an exception to the rule, but these would have done far better if the overvalued and appreciating rupee had not squeezed the profitability of domestic firms.

The story of imports is an analogue. During the period 2011-12 to 2013-14, average annual imports were $477 billion. Total imports were $448 billion in 2014-15, $381 billion in 2015/16 and $380 billion in 2016-17. However, these totals are deceptive because of the collapse in world oil prices from early 2015, which led a sharp contraction in the petroleum import bill. The total value of non-oil imports, at about $300 billion, remained unchanged during 2014-15 to 2016-17. Yet, from 2014 to 2016, India’s share in world imports—significantly higher than its share in world exports—rose from 2.25% to 2.66%. The essential underlying factor was the exchange rate of the rupee, which made imports distinctly cheaper than home-produced goods, whether fruits, mobile phones, consumer electronics or household goods. Every consumer in India is familiar with the overwhelming presence of Chinese manufactured goods. The consequent switch in domestic expenditure from home-produced goods to imports did lead to a contraction in aggregate demand which would have had a dampening impact on economic growth.

The persistently overvalued exchange rate in India means that the rupee is overpriced. Why? In the past, when exchange rates were fixed, devaluations often had negative political consequences for governments. However, in the present world of floating rates, currencies do depreciate. The dollar has, since Donald Trump assumed office. The politics of exchange rates is now passé. But it might have a corollary in the form of a macho belief system that thinks of a strong rupee as a plus point for the government. Any such belief is flawed.

It might just be a camouflage for the real reason, which is never made explicit. This stems from the compulsion of financing large current account deficits in the balance of payments through capital inflows provided by foreign institutional investors. The economy needs a strong exchange rate for confidence, together with high interest rates for profitability, to sustain such portfolio investment. These capital inflows drive prices up in stock markets and add to foreign exchange reserves. It might reinforce the macho feel-good factor. But this solution can turn out to be worse than the problem. There is considerable collateral damage to the economy.

First, portfolio investment flows have a significant impact on the exchange rate. If we plot the exchange rate of the rupee on one axis and portfolio investment inflows on the other axis in a graph, for every month in recent years, it is apparent that large inflows lead to an appreciation of the rupee and large outflows lead to a depreciation of the rupee. The appreciating overvalued rupee erodes the price competitiveness of exports and enhances the price competitiveness of imports, which hurts the profitability of domestic firms and is bound to enlarge the trade deficit. At a macro level, this also leads to a contraction in aggregate domestic demand so that economic growth is slower than it would have been in the absence of an appreciating rupee.

It is essential to recognize that the exchange rate is a price which matters for the economy in many spheres. It is far more important than portfolio investment inflows that can be unstable, fickle or volatile. The overvaluation of the rupee, which makes exports difficult and imports attractive, must be corrected. The time has come to let the rupee depreciate not just in nominal but in real terms. A more appropriate exchange rate would stimulate exports and dampen imports, just as it would help domestic manufacturing firms to be more competitive, both abroad and at home, to “Make in India" and combat the onset of deindustrialization.

The way forward, now, is to drop interest rates, which would also help the exchange rate depreciate. Together, these would stimulate investment and revive exports, which in turn will drive economic growth and employment creation from the demand side. The time is also most opportune as the consumer price annual inflation rate has dropped to 1.5% in June 2017.