Hiking through a rainforest in Costa Rica some years ago, I kept stopping to look at animals. Several diminutive frogs, no larger than my thumb, hopped daintily across the trail. Later, a much larger frog, easily the size of a small shoe, also hopped across, though not daintily. There were yellow-billed toucans, elegant black ferret-like creatures, howler monkeys, macaws zooming overhead like jet fighters. 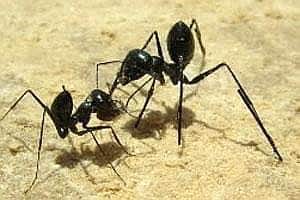 These were Central America’s notorious leafcutter ants, heading home with their loot. Sweating my way through thick forest, I had stumbled upon the animal world’s hardest workers. So efficient are these beasts, a colony of them can strip a medium-sized tree of its leaves overnight. No wonder they are considered major pests.

But kneeling above them that day, it was hard to think of them as pests. Instead, I was captivated by their energy, even a mysterious elegance as they scurried with their leaf sails aloft. Later I learnt something still more fascinating, to see which I want Mint’s editor to send me back to Costa Rica (serving science, that’s me). Riding shotgun on those bits of green are even tinier ants. Not that these are lazy freeloaders; they perform a very specific task. There’s a particular fly that likes to lay its eggs on live ants. Rushing about the leaf, the little ants snap at these parasites to keep them away. That’s their sole task, and lives depend on how well they perform it.

In fact, life among ants is about specific roles. There are leafcutters and fly-chasers which do just those jobs. Others are like gardeners, nurturing a peculiar fungus that cannot live outside the colony. Some ants chew leaves into a mush used to fertilize the fungus. Still others feed this fungus to larvae. To guard the colony, there are soldier ants. And there’s the queen, weighty head of her colony, whose sole task is to reproduce.

One time in the rainforest, I left my trail and followed the ants, hoping to find their colony and study it. The service of science, I flattered myself. Fortunately the vegetation quickly grew impenetrable, or I might have been flailing through it for a while. For when they search for leaves, leafcutters can travel over a hundred metres from their colonies. An equivalent journey on a human scale? 30km. Imagine rushing on foot from Churchgate to Borivali and back, every day.

But how do ants find their way, over such distances, through the rainforest? Not by looking around—they can see, but their worldview is limited by their size—but by following a trail blazed by still more role-players: scouting ants. These guys mark routes with specialized chemicals, called pheromones, secreted by glands in their bodies.

In his autobiography Naturalist, Edward O Wilson, the world’s foremost authority on ants, tells a delightful story that nicely illustrates how important pheromones are to ants. When an ant dies, it simply collapses to the floor of the colony and lies there. But its mates take no notice at all. They carry on with their work, stepping around and over the corpse as they hurry about. A couple of days later, a few worker ants will suddenly pick up their deceased friend, carry the body out to a kind of garbage heap and dump it there.

Why wait two days for this graceless funeral? Because it takes that long for the body of the dead ant to release a particular chemical, a pheromone, that announces to an uncaring world that he really is dead. Wilson had theorized this, but it took a while to isolate the pheromone. Then he found dramatic confirmation of its efficacy.

Wilson smeared some of the chemical on an ordinary, but very alive worker inside a colony. Almost immediately, several of the worker’s companions picked up the struggling, squirming creature and carted him off to the dump outside. The ant wandered back into the colony, only to run into colleagues who flung him out again. Servants to the relentless logic of the pheromone, the ants on the graveyard shift paid no attention to their comrade’s frantic antics to show he was alive. He smelled dead, he was dead.

Only when the odour wore off did they leave him alone.

Wilson had found out just how powerful pheromones really are. He had also left one ant thoroughly bewildered. All in the service of science.