Qatar Airways’ airline launch strategy is savvy, but what happens to Air India?

In providing options for air connectivity for the south Indian diaspora, the Persian Gulf carriers such as Qatar Airways offer a broader menu of destination choices

Singapore/ Sydney: In Qatar Airways Ltd’s decision to set up a brand new short-haul carrier in India, there’s a hint of commercial savvy that goes back a millennium and a half.

Otherwise, why introduce 100 new planes in crowded Indian skies? For all the lure of world-beating growth out to 2035, the hyper-competitive market has already seen the rapid implosion of local beer tycoon Vijay Mallya’s Kingfisher Airlines Ltd and is currently witnessing a painfully slow crumpling of state-run Air India Ltd. under a $7 billion debt load.

So what’s motivating Qatar to dive into this air pocket? A two-word answer may be: Southern India.

Centuries before Arabs first invaded the northern parts of the country, they controlled a flourishing trading empire between Kerala on the southwestern Indian coast and Yemen and Oman. As far back as the first century AD, Greek navigators remarked on how the Kerala port of Muziris “abounds in ships sent there with cargoes from Arabia."

Today, the ties are even stronger. The economic engine of the Persian Gulf region practically runs on an estimated 8.5 million-strong Indian workforce, sprinkled with a small but wealthy group of traders. A bulk of these come from Kerala. So it’s not a surprise that in providing options for air connectivity for the south Indian diaspora, the Gulf carriers offer a deeper understanding of the market—and a broader menu of destination choices—than their East Asian rivals such as Cathay Pacific Airways Ltd. and Singapore Airlines Ltd.

What is puzzling, though, is New Delhi’s uncharacteristic eagerness to let the Persian Gulf carriers exploit their historical advantage. Last year, India became one of the few countries in the world to allow a 100%foreign-owned airline to operate on local routes.

The opening up of Indian skies began in 2012, and led to an infusion of equity in debt-laden Jet Airways India Ltd. by Etihad Airways PJSC. Later, AirAsia Bhd. and Singapore Airlines entered the market via local joint ventures, heating up competition.

Amid an ongoing price war, it’s not clear why bureaucrats are so anxious to create fresh foreign-funded capacity that would only send Air India over the runway. 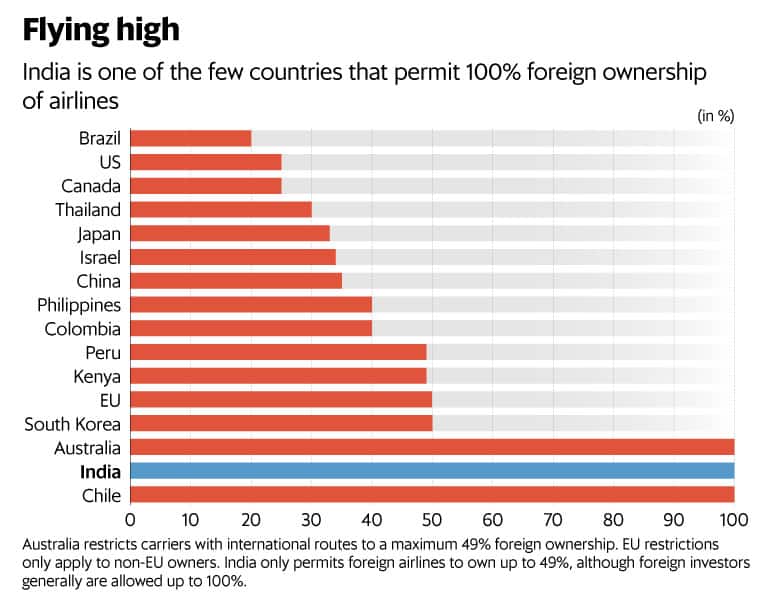 It’s more than just laying out the red carpet. As the Mint newspaper reported in January, the Qataris were actually invited by the Indian government to set up a local carrier when they were haggling for more flights to the nation.

From the point of view of the Qatar Investment Authority, the sovereign wealth fund that backs Qatar Airways, the opportunity makes ample sense. Etihad and Emirates are promoting airports in their home bases of Abu Dhabi and Dubai, respectively.

If Doha has to compete with them for the ultimate prize of the preferred regional hub for travel to and from South Asia, it has to put narrow-body Qatar Airways planes on the tarmac in southern cities such as Thiruvananthapuram (Trivandrum) and Kochi (Cochin).

Once they have 20 aircraft flying locally, they’ll get the Indian government’s permission to fly international routes. That’s when the hub strategy can kick in.

Singapore and Hong Kong have fallen so far behind in the South Asia hub contest, it’s unlikely they’ll bother trying anymore. It’s now only the Arabs slugging it out for dominance. Just as it was in the 7th century. Bloomberg