Just how high is income inequality in India?

The International Monetary Fund’s most recent report on the Asia-Pacific region confirms what we all know—India is a highly unequal society. But how unequal are we compared to other countries? The five charts on the right from the IMF report show the extent of inequality in India and its impact: Chart 1: India not only has one of the highest levels of inequality in the region, but it also shows very large increases in inequality since 1990. Its net Gini index of inequality (based on income net of taxes and transfers) rose from 45.18 in 1990 to 51.36 in 2013. Only two countries in the Asia-Pacific region—Papua New Guinea and China—are more unequal. Indeed, the net Gini coefficient in India is much higher than the average of 43.69 for Latin America, long excoriated as one of the most unequal regions in the world. Chart 2: This chart shows that the rise in inequality in India between 1990 and 2013 is one of the highest, not just in Asia, but also in the world. On the other hand, it also shows that other highly unequal regions like Latin America and Sub-Saharan Africa have seen a decrease in their net Gini coefficients. 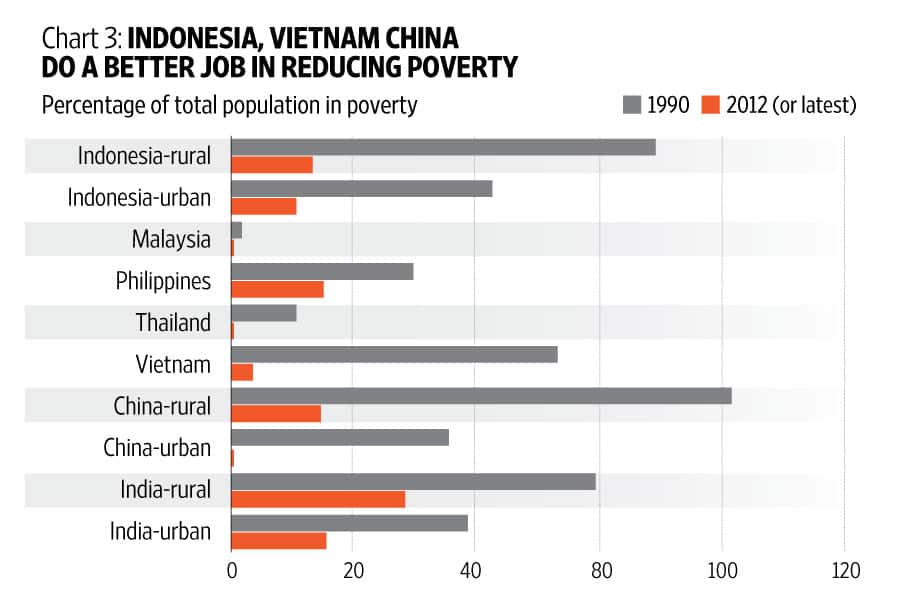 Chart 3: India has made great strides in reducing poverty, thanks to high growth. The chart shows the percentage of the population below the poverty line of $2 per day in 2011 purchasing power parity terms. But note that the rural areas of China, Vietnam and Indonesia all started with higher poverty levels than India in 1990 and have been able to do better than India in reducing poverty. A more equitable distribution in the gains from growth would have helped lower poverty further. Chart 4: Much has been made of India’s rising middle class. The chart shows the growth of the middle class in Asian countries since 1990—$10-20 per day in 2011 purchasing power parity terms being defined as middle class. Both China and Indonesia have done much better than India in growing their middle classes. The IMF report says, “Higher income inequality has also lowered the effectiveness of growth to combat poverty and prevented the building of a substantial middle class." Chart 5: One of the main reasons for India’s lack of productivity is the high proportion of its population in informal employment. The chart shows informal non-agricultural employment as a percentage of total non-agricultural employment. India’s share of 83.6% is much higher than those of China, Thailand and even the Philippines. “Reducing labour market duality and informality, while putting in place well-designed labour market policies to boost job creation, can reduce income inequality," says the IMF report.

The reasons for high income inequality include disproportionate returns to education for the well-off, the capture of subsidies by the rich and the rural-urban income gap, apart from the initial heavily skewed distribution of wealth, of course. The IMF says high levels of inequality hurt growth and “it is imperative to address inequality of opportunities, in particular to broaden access to education, health, and financial services, as well as to tackle labour market duality and informality. Strengthening the redistributional effect of fiscal policy is also essential."