Respect for the rules

Respect for the rules

There may be a million reasons to lose hope in India, but I see three reasons why the future of this country is secure.

The first is that India is being dragged, kicking and screaming, to a rules-based regime.

The second is that the information asymmetry that traditionally allowed the haves (as in those with information) to lord it over the have-nots is eroding and might soon cease to be. 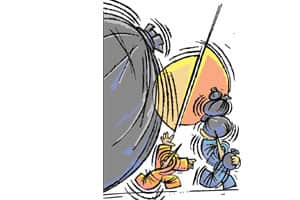 I’ve written on the collapse of the established information hierarchy before (you could say that it’s a sort of a pet theme) and the redoubtable Pratap Bhanu Mehta has a great piece in Thursday’s Indian Express on the change in public attitude to corruption in high places (bit.ly/P2116r), but all three points merit repeating simply because they are being reinforced all over again in the controversy over the allotment of coal blocks.

Mint’s editor R. Sukumar discusses some of the stories that have made the headlines over the week, from the coal block allocation controversy to the Supreme Court’s landmark judgement on foreign arbitration.

To really understand the change, though, we will have to return to the late 1990s (or early 2000s) when smart politicians decided to move away from petty corruption and focus on bigger things. The move reflected a nuanced understanding of the psyche of the Indian voter. Petty corruption affects the voter, but he is far removed from corruption in bigger things, such as, say, the allotment of national natural resources (take your pick from spectrum, coal, iron ore, water…). To be sure, this hasn’t meant the death of petty corruption, but it has made most politicians willing supporters of e-governance initiatives, including Aadhaar. After all, if you can make a few hundred crores from the allotment of coal blocks (either through a kickback from a company whose cause for a coal mine is being espoused or promoted, or by actually setting up a company and then ensuring it gets a coal mine), then why worry about a few tens of crores from a smaller racket?

The policy of the day regarding most resources facilitated this corruption. In the case of telecom licences and spectrum, the policy was merely out of sync with the times. In the case of coal mining rights, it was arbitrary as well. And while there were some efforts to make these policies more transparent and equitable, no one tried very hard to effect the changes simply because there were people from all political parties who benefited from the randomness and the arbitrariness of the allotment process.

The numbers tell the story of the decay in the 2000s. Take coal blocks, for instance: between 1993, when the arbitrariness was first introduced into the policy, and 2004, 43 coal blocks were allotted, but between 2005 and 2011, 245 were. The United Progressive Alliance has been in power since 2004, and while I believe it has to pay a price for the irregularities—including the resignation of the Prime Minister if it comes to that—I am also convinced that the same number of coal blocks would have been allotted had any other party been in power. I am aware of the weakness of that argument even as I make it because there is very little distinction between integrity and the absence of a chance to be corrupt and benefit from it. If I were in an opposition party I’d be delighted at not just the ruling party’s troubles, but at my party’s near-escape.

None of what is happening in l’affaire coal (and what happened with spectrum) would have happened had people been willing to condone and accept corruption. They don’t seem to be, and fuelling this, even as it feeds off this, is media, especially 24X7 television news channels. It is easy to question the journalistic processes of these channels on counts such as sourcing, due diligence, and balance, but the fact is, they are out there, breaking stories, being aggressive, and generally making life uncomfortable for a lot of people. In the case of spectrum, and now coal, their relentless intensity (complemented by the print media and amplified by social media), combined with the change in the attitude of voters, and reinforced by the principled stand of the courts could well mean the emergence of a rules-based regime.

The transition may be painful, but the move away from exception-driven governance can only be good for the country.