Fewer A-rated movies are made in India now, but censor asking for more cuts

Every once in a while, the censor board does something that results in outrage amongst the twitterati and movie critics alike. Last year, it was cutting short a kissing scene in the James Bond movie Spectre that did this; this year it was giving a U/A certification to The Jungle Book.

The censor board, its critics argue, should only certify movies and not ask for any cuts. After all, its formal name is the Central Board of Film Certification (CBFC).

They may have a point. CBFC’s own data shows that a greater proportion of feature films are being passed with cuts in recent times. About a decade ago, two out of every three Indian movies were certified without any cuts; now, that has fallen to one in every two. 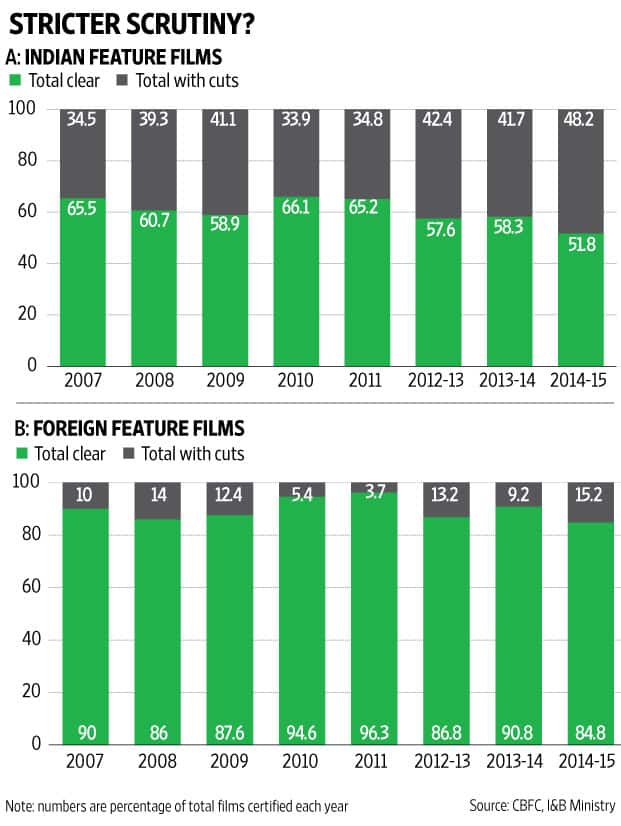 That said, there are fewer adults-only, or A-rated, movies released in India every year. Among Indian feature films, the proportion of A-rated movies has fallen to almost one in five compared to one in three at the start of this century. For foreign movies released too, the ratio has come down. 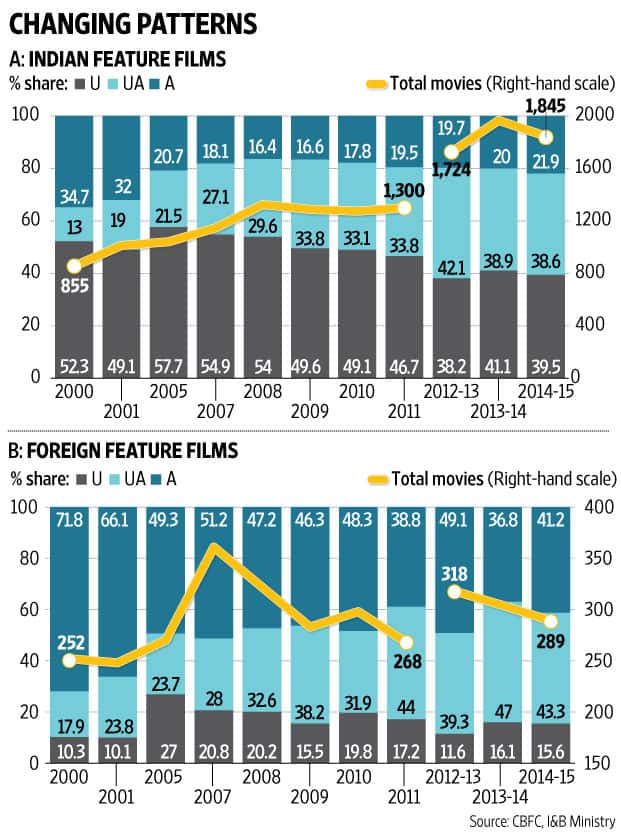 Has the board become more liberal?

The answer is not simple. One reason for the declining share of A-rated films is the fact that a lot of such content is readily available on the Internet today.

“A lot of adult cinema was made for small centre audiences earlier. Now that everything is available on the Internet, demand for such cinema has come down," said Bollywood film director and scriptwriter Akashaditya Lama.

Two, if a mainstream movie is rated adults-only, that is a death knell for its box office collections. An adult-rated movie can’t be telecast on TV, further denting the revenue stream. Hence, there is a possibility that directors are shying away from bold themes at the insistence of producers and financiers.

The fall in A-rated movies has been accompanied by a rise in the proportion of movies rated UA—a middle ground of sorts.

Film makers “are making films for (a) young audience. UA is sort of a middle category for them to make films on subjects they like as well as get rights for television. TV gives a lot of money for big films," said Ira Bhaskar, professor of cinema studies at Jawaharlal Nehru University.

Foreign movie makers have no such compulsion. So, what explains the increase in UA-rated foreign films released in India? And the decrease in A-rated ones?

Maybe, the censor board has become liberal, after all.

Some say that a lot of the disagreement over film certification is because of too tight an adherence to the Cinematograph Act of 1952. One part of this Act states that a film can’t be certified if it “is against the interests of (the sovereignty and integrity of India), the security of the state, friendly relations with foreign states, public order, decency or morality, or involves defamation or contempt of court or is likely to incite the commission of any offence".

With audience preferences having changed drastically over the years, adherence to the old censorship norms, particularly when it comes to definition of morality or decency, has resulted in an unfair scrutiny of films, they argue.

“In such a heterogeneous situation—or any situation for that matter—it is impossible for any small group of people, however well-intentioned, to represent the whole country, or even a city. Which is why some of us believe that there should not be any censorship (excisions and deletions) by the CBFC, only certification," said Shohini Ghosh, who teaches at the AJK Mass Communication Research Centre, Jamia Millia Islamia.

In April , a committee headed by veteran filmmaker Shyam Benegal recommended that CBFC should only be a film certification body.

But it’s anybody’s guess if that suggestion will be accepted.

The movies referred to in this story refer to mainstream films that are meant for a theatre release. The CBFC also certifies short films which encompass everything from movie trailers to advertisements; those are not included in this analysis. For language-wise data on film certifications, scroll below.