Honey, I lost the kids (I think the brats parachuted)

Honey, I lost the kids (I think the brats parachuted)

Do we have the worst-behaved children in the world or what? I’m writing this column on a long-haul flight. Across the aisle from me is a British father, travelling with his seven-year-old daughter. I have watched with astonishment how, over the last seven hours, the girl has not misbehaved once. She has read a book, she has peered at the in-flight entertainment, she has made conversation with her father and she has consumed her airline meal without dropping either the food or the fork. 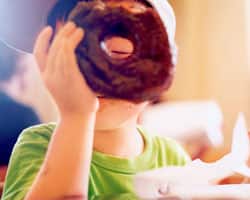 I woke up from a light sleep to hear one child loudly telling the other: “Don’t open the door. You can’t do that while the plane is flying."

Christ, I thought to myself, these brats are unwitting suicide bombers.

Through it all, the parents have either looked on indulgently or, weighed down as they are with too many handbags, polythene sacks of duty-free purchases and the debris of lunch, have shrugged helplessly. As far as they are concerned, none of this is their problem.

I am as patriotic as the next man and as unwilling to believe that Indians are worse than foreigners in any respect. But on this score, I’m quite willing to lower the tricolour and put up the white flag of surrender. There’s no doubt that we allow our kids to get away with much more than foreigners do. We are much less concerned when they inconvenience other people. And we take the line that their age exempts them from all norms of socially acceptable behaviour.More to the point, this is true of most Indian children, no matter where they are resident. If you are on a flight back from the US, the NRI kids will be the ones throwing orange juice at other passengers while the American children sit peacefully.

It’s the same at restaurants and other public places. Many of us have an advantage over people with similar jobs in the West: We can hire maids to look after our kids when we go out. Despite this, too many parents insist on bringing very small children to late dinners at expensive restaurants. Given that they can afford to eat at these restaurants, they can probably afford domestic help as well. But no, we will have to have our dinner interrupted as Pappu and Pinky keep running to the door or as Bunty cries loudly, shouting “Mujhe butterscotch ice cream chahiye." Surely, it can’t be good for the kids to be out that late? And can’t Bunty have his bloody butterscotch at home?

A friend of mine was enjoying a quiet dinner with her boyfriend at a Delhi pizza place when the children from the next table began invading their space and wrecking their dinner. Politely but firmly, she asked the mother if she could possibly keep her kids from hassling her table. Rather than offer any apology, the mother turned viciously on her. “I am sure you are the kind of woman who has no children of your own," she snarled. “That’s why you are complaining."

What is it with us? Why don’t we recognize that as much as we love Chunnu, Munnu, Pappu, Bunty or Pinky, the rest of the world is under no obligation to regard them with similar indulgence? Worst of all is the feeling of entitlement that prosperous parents have.They believe that because they are rich, their kids have the right to do whatever they feel like. It’s a funny thing but the children of less-wealthy or poor parents never behave quite as badly as the children of the rich. Perhaps this is because the social inequalities of India mean that their parents themselves lack the confidence to cause a stir in public places. But rich kids—they are even worse than their parents.

I have now come to the reluctant conclusion that no matter how much people such as me rant and rave, Indian parents will simply not manage their children better. And as the new prosperity creates newer millionaires, there will be more badly behaved children nearly everywhere we go.

So, I think the time has come to impose some rules. Children under the age of 14 should be banned from these places:

uAll restaurants at dinner. If a restaurant wishes to welcome kids, then it should announce that it is ‘child-friendly’ or whatever, so that the rest of us can stay away. This is an international practice, so there should be no problem about adopting it in India.

u All movie halls during shows that start after 7pm. I’m sorry if that means that young mothers will have to forgo seeing their favourite movies because they can’t bring Chunnu and Munnu along. But they can always rent the DVD later.

u Aeroplanes pose a particular problem because the little brats have to travel, somehow or the other. But I think that on long-haul flights, they should have a designated cabin for families travelling with children. And they should ensure that Pappu doesn’t open the plane door as a prank.

Does this make me an intolerant fascist? Possibly. But I speak as the father of a son who followed all these rules when he was young. And if my brat could do it, why can’t yours?