Demonetisation was the first shock to the subprime economy and just when new notes began to fill the gap left by old ones, Uttar Pradesh, came up with a second blow: $5.6 billion of loan forgiveness

Singapore: Mortgages are perhaps the only specialist lending that will survive in India. Every other form of credit, especially subprime, is made so risky by the country’s fickle policies and populist politics that it must eventually lose its independence in the safety of a deposit-taking bank.

Bharat Financial Inclusion Ltd., India’s biggest micro-lender, is a good example. Bad loans at the rural financier surged to 6% of the total at the end of March, from 0.06% in December. Bharat’s 5.3 million active borrowers, who use the funds to rear livestock or sell bangles, owe an average $240. The government’s 8 November demonetisation, and a March state election fought on the promise of a loan waiver to farmers, probably make this the end of the road for Bharat Financial’s independent existence. The board has authorized the CEO to appoint advisers “to explore the complete spectrum of strategic options," the Morgan Stanley-backed lender said after posting a $35 million quarterly loss, its first since overcoming a life-threatening crisis five years ago. (That debacle too, was of politicians’ making.) 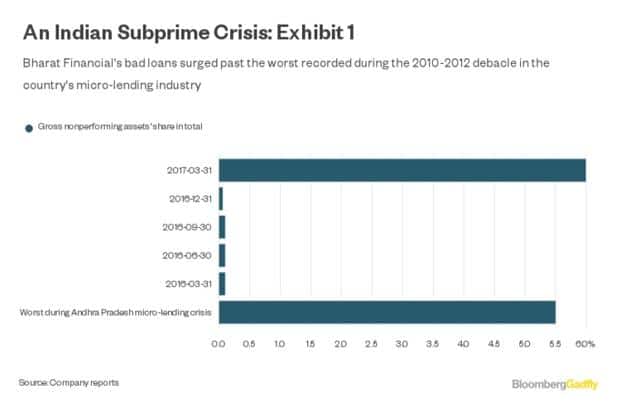 IndusInd Bank Ltd., backed by the billionaire London-based Hinduja brothers, is in advanced talks to acquire the micro-financier, Bloomberg News reported in March.

After India banned 86% of its currency stock, Gadfly flagged the risk to shadow banks’ cash collection. Those concerns came to pass. Ujjivan Financial Services Ltd., which is in the process of becoming a small bank, said last week that its bad-loan ratio would have ballooned from 0.15% to 3.69% had it not been for the 90 days of extra time it got to classify an account as nonperforming. Even with the regulatory reprieve, NPAs almost doubled in three months, to 0.28%. Demonetization was the first shock to the subprime economy, one from which Ujjivan is still recovering. But just when new notes began to fill the gap left by old ones, Uttar Pradesh, the most populous state, came up with a second blow: $5.6 billion of loan forgiveness. The rational response of farmers, even in other states, has been to stop repaying loans in case they, too, can secure a free pass. With a juggernaut of demands already rolling, the central bank’s warning on moral hazard won’t be a showstopper. 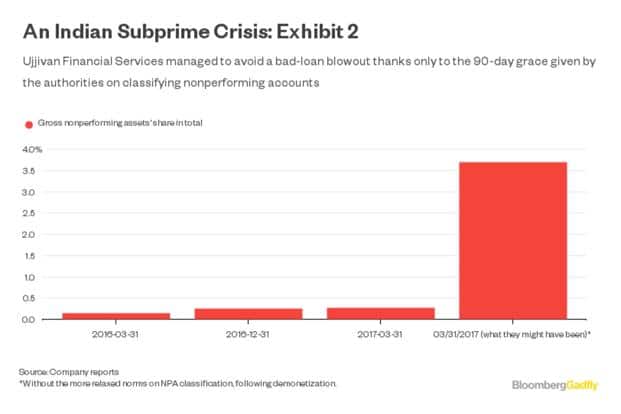 As the banking regulator, the Reserve Bank of India is losing the most here. Credit growth in the country’s stiflingly state-dominated banking system has collapsed to a multi-decade low under the weight of $180 billion in soured corporate debt.

If Bharat Financial and Ujjivan are any guide, even the RBI’s strategy of letting a newer vintage of healthier private-sector players pick up the slack isn’t doing too well.

What monoline lenders lack in deposit muscle, they make up for in their superior knowledge of borrowers and risk management. It’s a shame that policy whimsy and cynical politics mean the specialists can’t survive except as part of conventional banks. Bloomberg