What went wrong with the Indian economy?

As windfall gains from plunging oil prices tapered off, the underlying problems in the Indian economy came to the fore. GST and demonetisation simply aggravated the downturn

The Indian economy started going downhill from the June 2016 quarter, as chart 1 shows. What are the reasons? It wasn’t because of low investment—investment as a proportion of gross domestic product (GDP) has been falling since 2011-12. It wasn’t sluggish exports—export growth has either been negative or in the low single digits since 2012-13. Agriculture had suffered two consecutive years of drought in 2014 and 2015, so things could only improve there. The question, then, becomes not just what caused the slowdown, but how the Indian economy did well in 2014-15 and 2015-16 in spite of back-to-back droughts, the drying up of investment demand, weak exports and the mess in the banking sector.

Is there something in the economy that changed drastically during the period? Yes—oil prices. The price of Brent crude fell from $114 per barrel in mid-June 2014 to $54 by the end of March 2015. It then fell further to $39 by the end of March 2016. That led to a dramatic improvement in India’s terms of trade. In March 2016, in its annual consultation on the Indian economy, the International Monetary Fund (IMF) said, “Since late 2014, a halving of global oil prices has boosted economic activity in India and underpinned a further improvement in its current account and fiscal positions, and engendered a sharp decline in inflation". In February 2017, IMF reiterated, “Supported by a large and durable terms of trade gain, and more recently by a favourable agricultural crop outlook (supported by normal monsoon rainfall) and decennial civil servant wage revisions, private consumption remains the driving force of the Indian growth recovery".

What about the second half? If we strip out net exports (exports minus imports) from the GDP data, we get an idea of how the domestic economy is doing. The numbers show growth in the domestic economy slowing in the first half of 2016-17, but perking up a bit in the latter half despite demonetisation and then soaring in the June 2017 quarter, despite the goods and services tax, or GST (see chart 2). That means domestic consumption wasn’t badly affected by demonetisation, because higher government consumption and a turnaround in agricultural production offset its effect. 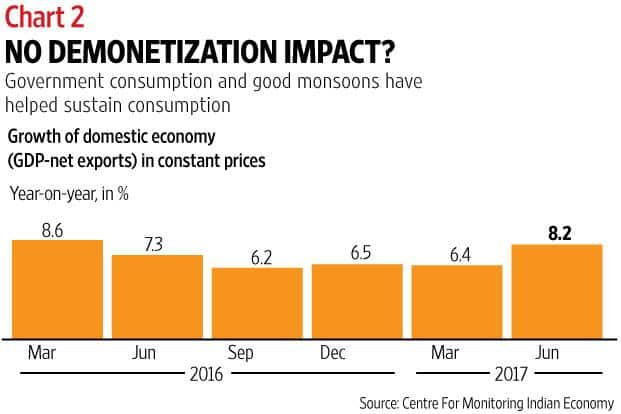 But if the Indian economy held up despite demonetisation, it means the slowdown from the second half of 2016-17 lies in the external sector. That is seen from the sudden leap in import growth from the December 2016 quarter. Chart 3 shows the jump in imports. 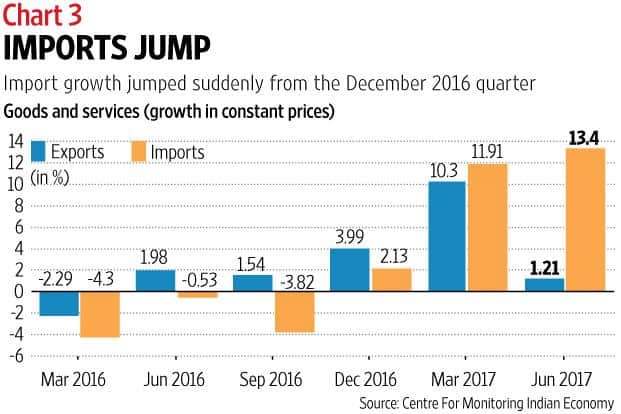 If the imports are due to disruption of supply chains in the country affecting domestic businesses on account of demonetisation and GST, then imports of manufactured goods should have gone up. Which manufactured goods have seen the most imports? In the December 2016 quarter, the rise in imports is explained by increased imports of three categories—aircraft and parts, the ‘ship, boat and floating structures’ group and pearls and precious stones. They account for practically all the increase in imports. Similarly, in the March 2017 quarter, it is three categories that count—pearls and precious stones, telecom instruments and electronic components. This doesn’t seem to have much to do with problems in supply chains caused by demonetization.

It’s only in the June 2017 quarter that the increase in imports gets more diversified. A quarter of the rise in imports in the June quarter is broad-based and could be the result of the disruption caused by the run-up to the introduction of GST. Chart 4 gives the details. 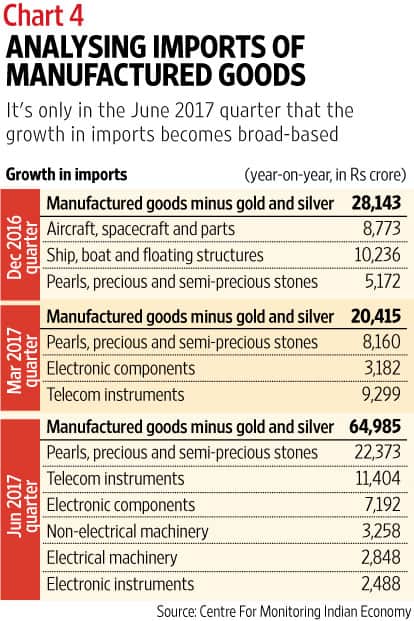 So what is the diagnosis? First, the slowdown began in the June 2016 quarter, as the oil bonanza tapered off. The slowdown was broad-based. Growth in the ‘financial services, real estate and business services’ segment has, in fact, been slowing down since the December 2015 quarter, due to the woes of the banking sector.

Second, demonetisation took its toll in the second half of 2016-17 and the sector that was hurt the most, unsurprisingly, was ‘financial services, real estate and business services’. But its impact was offset by government spending and good monsoons.

Third, the June 2017 quarter saw a recovery in the services sector, which pushed up domestic growth, but the strong growth in domestic trade could be a one-off as businesses pushed sales prior to GST. Rising imports and slowing exports hurt overall economic growth in this quarter. The manufacturing sector was badly hit as the result of GST.

In short, the economy has been weak for many years, with low investment and sluggish exports. The plunge in oil prices was a bonanza which accounted for a large part of the improvement in growth in 2014-15 and 2015-16. In 2016-17 and the first quarter of 2017-18, as the windfall gain from the drop in oil prices tapered off, it could no longer paper over the underlying problems in the rest of the economy; the disruption caused by demonetisation and GST aggravated the downturn.