How rising returns to education can lead to greater inequality

Rising returns to education, if not accompanied with wider access to higher education, can lead to greater inequality

Inequality is rising in the world. There are enough studies from academics and even investment banks to show that. Generally, the focus has been on the role of capital accumulation, but in recent years, rising wage inequality has been discovered as another reason for increasing inequality, especially for developed countries.

As part I of this series showed, India is witnessing a rise in education premium, mostly for urban salaried workers. This begs the question whether India, too, will witness worsening income inequality?

Now, the data from India Human Development Survey (IHDS) shows that getting a salaried job generally results in higher incomes, which tend to rise faster at higher levels of education. Moreover, obtaining a salaried job in itself appears to be dependent on the level of education. Thus, in such a scenario, income inequality is likely to worsen if there is lack of equal access to higher education. In case of India, the problem becomes compounded because inequality in opportunity or economic outcomes is often tied to inequality between socio-religious groups. What is more worrying is that these differences in educational levels can persist for generations. Economists Mehtabul Azam and Vipul Bhatt argued in a 2014 paper that the correlation of educational attainment between fathers and sons has been largely steady in India over the years for individuals born between 1940 and 1985. Although the chances have improved for a person born to less educated parents to climb up the education ladder, the study finds that the intergenerational correlation in educational attainment in India is higher than the global average.

Thus, it is not surprising that the differences in earnings across various social groups in India mirror the trend in educational attainment. The average monthly earning of an urban Muslim male (in the age group 25 to 64) was ₹ 6,750 per month in 2011-12, almost half of the average ₹ 12,650 earned by an upper caste Hindu male. Similarly, an average urban Dalit male earned less than two-thirds of the average earnings of a Hindu upper caste male. India is also facing the problem of rising overall income inequality as suggested by a number of studies based on the consumer expenditure surveys conducted by the National Sample Survey Organisation. Inequality, as measured by the Gini index, which tries to measure the difference between incomes of each pair of individuals in an economy, has risen in the post-reform phase. 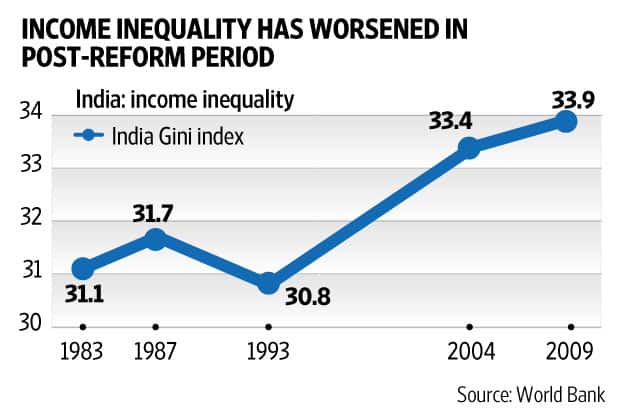 Rising inequality in the post-liberalization period is consistent with the hypothesis that technological progress disproportionally raised the incomes of more skilled workers. However, it must be clarified that “education premium" and access to education need not be the only deciding factors for the level of inequality in a society. A host of other factors such as initial distribution of wealth, taxation, strength of labour institutions, unionization and government action are also responsible. That said, rising returns to education, if not accompanied with wider access to education, can lead to greater inequality.

This is the second of a two-part series on education premium. Part I talked about rising returns to tertiary education.