Yahoo has some good news and (of course) some bad news

Do you want the good news or the bad news about Yahoo Inc.? Hint: The good news is that there actually is some good news.

The tech company that can do nothing right had plenty of bad news in its (maybe) last disclosure of quarterly earnings before Verizon Communications Inc. (maybe) buys the internet parts of Yahoo and leaves behind a Yahoo shell called Altaba with a messy pile of Alibaba shares and other highly valuable refuse.

The continuing bad news from Yahoo is the company doesn’t believe it will complete the sale to Verizon in the first three months of this year, as it originally thought. Um, of course not. Yahoo and Verizon are in semi-open war over whether Yahoo was forthcoming about two sweeping cyberattacks on Yahoo users. Lawyers fighting over who should bear the risk from cyberattack hangovers and potential regulatory crackdowns naturally makes it tough to finalize a deal on schedule.

The good news, by Yahoo standards, is the company’s business is slightly less terrible than it has been. Hooray? 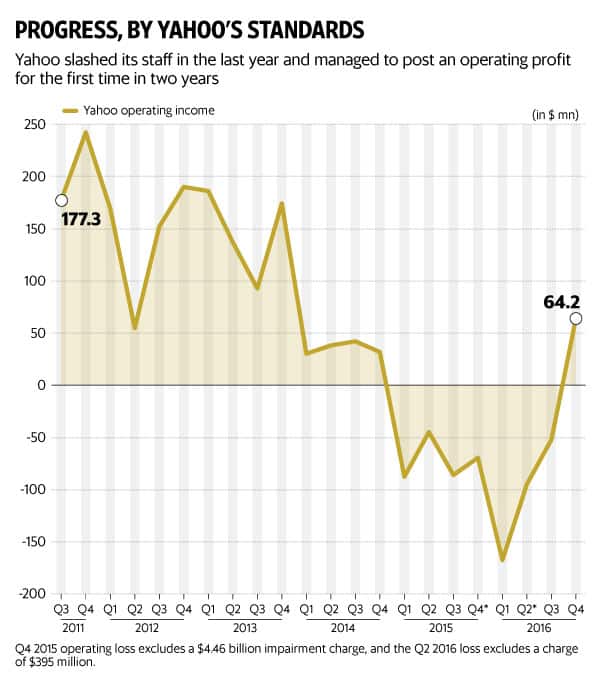 There are other dark linings to Yahoo’s happy cloud. The profit came largely because it has slashed staff and other costs — something Verizon would have done anyway if and when the deal closes. Yahoo’s revenue is still shrinking, although it is shrinking more slowly than before. Revenue, excluding commissions paid to advertising partners, declined 4% in the fourth quarter. That was the best revenue performance in 18 months. All that means Yahoo’s business has turned a corner, which would have been great if Yahoo had remained independent. The metrics that will matter to Verizon if it buys Yahoo -- the number and price of ads Yahoo is selling -- are not doing so hot. Yahoo’s share of the US digital ad market is expected to shrink to 2.7% this year from about 4.2% in 2015, according to eMarketer estimates. And the amount of time Americans spend surfing Yahoo’s websites and apps is staying flat at best, comScore data show.

Oh. I guess that isn’t such good news after all. Bloomberg